How did your time in the wilderness impact your relationship with each other?

Isaac: I think it strengthened our relationship it huge ways – we had to lean on each other for everything. By contrast, filming your own journey can be a bit trying on your relationship at times…

Bjornen: I feel like this experience strengthened our relationship in ways we will still be finding out when we’re 90. It’s just hard to explain in one little paragraph, but it has something to do with a certain level of trust and reliance on the other person, with unconditional love (Geez, he had to dress me some days, prop me up at night so I wouldn’t be in so much pain, rub my smelly,swollen feet, listen to my grumpiness sometimes, convince me that we weren’t going to get too cold…). But we have a pretty solid relationship because of it. I know he’ll be there for me no matter what comes along, and I hope he feels the same way about me. I think he described me as a “mule” once… and I’m pretty sure that’s a good thing. At least that’s how I’m seeing it. 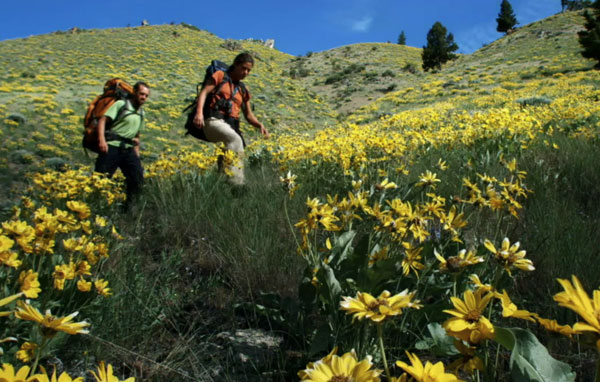 Isaac and Bjornen Babcock in the River of No Return Wilderness

How many wolves did you see during your entire trek? Too few or plenty?

Isaac: Too few for my “observational desires”. But from a biological standpoint, I feel the numbers where just about right when we were there, but today wolves are under some pretty heavy hunting and trapping pressure in Idaho, including the Frank Church River of No Return Wilderness. The state of Idaho has committed to have wolves in the state, but at a much lower population than they are currently at, (and much lower than the level they were at when we were back there for our film). I don’t think we would have the same opportunity to see and watch them now, as we did just two years ago (when working on the film). It is quite a controversial subject here in Idaho, and while the above comments are my opinion, please realize that the opinions on this subject vary widely and are often extremely emotionally charged. Unfortunately the views seem to continue to be more and more polarized. In the end, the number of wolves in the wilderness will have less to do with biological carrying capacity (the number that could exist in a somewhat sustainable system) and more to do with the number of wolves that is deemed socially tolerable, which is largely a product of political interest and desired ungulate hunting opportunity. Sorry for the lengthy answer, but this is one of the most complex issues in having wolves return to Idaho, there is no simple answer, and a lot of work ahead for us to get through it.

Bjornen: Just about right, I’d say. I mean, we went for long periods of time without seeing any wolves or sign at all. But then we’d see something, some interaction, hear them (one of the best sounds in the world), or even just some fresh tracks and it would make everything worthwhile. I mean, wolves were what brought us out there in the first place, but they weren’t the only reason.

Would really be interested in hearing or reading more about the equipment and any problems you experienced!

Isaac: We used a Red One camera and an HV20 for the ad lib hiking camera (b-roll). The Red One was a newer camera with a tremendous picture, but presented some technical difficulties in the field. It was power hungry, and it recorded to hard drive which meant we had to offload it at times. It also took 90 seconds to boot up before you could record. A lot can happen in those 90 seconds of watching wildlife, and one can pull out a lot of there own hair in frustration waiting for the camera to be ready to record. But the picture quality it captured, and the slow motion capabilities made it worth while. We hiked with foldable solar panels to charge batteries, which worked acceptably in the summer, but struggled to keep up in the winter. Generators and other motorized equipment are prohibited in designated wilderness, so solar panels were the only option. There were plenty of challenges, and lots of frustrations and troubleshooting, but it’s all part of what made the journey what it was.

Bjornen: Oh gosh… how long do you have? Isaac is really the equipment guru, so I’ll let him answer this one. Ha! I got out of that pretty easily…

Is Bjornen able to continue with her backpacking adventures? What kind of treatment is she receiving for her RA?

Bjornen: I am very happy to report that my RA symptoms have all but disappeared (I’d say they are 98% gone). I have no idea what exactly it was that made it go away. It was a long 3 years of trying all kinds of different approaches, everything from conventional medication (which I really disliked, and though it helped in the beginning, it gradually lost its power to make me more comfortable) to restrictive diets, to acupuncture, homeopathic remedies, keeping stress out of my life… So I don’t know what it was that helped, maybe a combination of everything, and maybe simply time. I did learn so much in the process though, the most important thing being that you really have to take responsibility for your own health, and that your body can heal itself if it is given even half a chance… it’s an amazing thing! These days I can do everything I used to be able to do. I feel absolutely great! I appreciate everyone’s concern, and hope other people who are dealing with painful illnesses can take some comfort in hearing about my experience, and that I was able to get rid of it. I know I loved to hear about that kind of stuff when I was in pain, it gave me hope.

I wanted to ask if that was actually the only time you caught the wolves making a kill?

Isaac: This is the only time that we saw the wolves make a kill, in fact, it is the only time I have ever seen the wolves make a kill here in Idaho, and that includes my entire 16 years of working on wolves here. I’ve seen a handful of unsuccessful hunts, but this was the only successful hunt. Statistics show that wolves are only successful in 1 of 10 hunts. That’s like working 10 different jobs and only getting paid for one of them. It’s my opinion that getting food isn’t as easy or straightforward for wolves as some make it out to be.

Bjornen: Yes, it was. There were several times when we saw interactions that we were almost sure were going to end up in a kill, but never did (like the lame elk on the ridge interaction). We found several kills that had just happened the night before, or very recently, but had never seen one before. 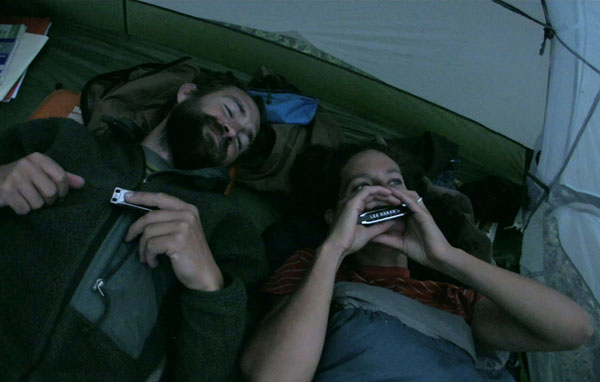 How do you live differently in society after living with the wild?

Isaac: You get an inkling of what you need vs. what you want. Unfortunately the longer I spend back in society, the more I slip back into confusing those two things and justifying wants. It’s human, it’s ok – but it is interesting when you cognescient of it happening.

Bjornen: I’m not sure that we live differently, but that we live with more awareness perhaps… It’s always a good reminder to be present as much as possible, and living in the wilderness it’s just hard to be anything BUT present. It’s a great reminder as to what is really important in this world.

What were you able to carry in your packs? Even with the mail/food drops, what were some of the things you did to hunt, live and eat off the land during the year?

Bjornen: This is an area that I wish we could have been better at… living off the land, that is. Honestly, we brought most of our food with us, but it was stuff that we had made ourselves, and then dehydrated. We did do some fishing, where it was legal (mountain lakes, stocked rainbow trout…which is an interesting issue in itself… but an entirely different subject that I’m not going to get into right now, AND our pole broke almost right away, so it was rather unsuccessful), and of course obvious seasonal foraging along the way (wild strawberries, morel mushrooms, huckleberries).

Would you do it again?

Isaac: Yes and no. I would love to go spend a year, or many years back there filming. I think we barely scratched the surface of wilderness, the Frank Church River of No Return, and what makes it so special. I’d love to spend the rest of my life working on capturing some of that essence. But in truth, our journey may be the only opportunity we’ll have to spend such a concentrated amount of time and effort out there. I’m grateful for the opportunity we had.

I’m not so sure I would bring a small camera to film ourselves again, we never intended to have “our journey” be such a large portion of the story, and that was challenging, both on a relationship and on altering and infringing on one’s own wilderness experience. But I am not sorry that we did, I just don’t know if I would put Bjornen or I through that aspect of it again.

Bjornen: Sure, if it weren’t for being really excited about starting to farm and being rooted in one place. Actually I have to amend that answer. I would NOT go make another film. One is plenty. But spending a significant amount of time in the wilderness, absolutely… if the time were right.

My Congo
The Good, the Bad, and the Grizzly
Touching the Wild
Dogs in the Land of Lions
The Elephants of Africa
Super Cats: Episode 1 | Extreme Lives