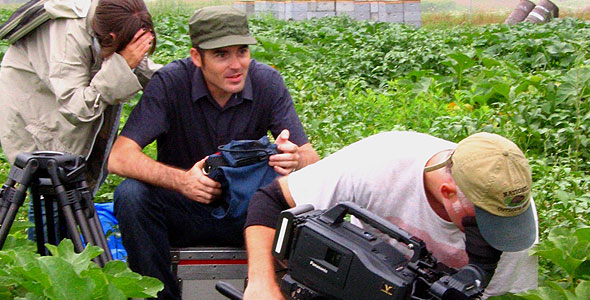 NATURE goes behind the scenes of Silence of the Bees with an interview with producer Doug Shultz.

What is the story you tell in Silence of the Bees?

The film actually encompasses three parallel stories. The first is the overall mystery of why the bees are disappearing, and the scientific investigations that are under way to try to understand this. The second is the surprising reliance that we have on this completely unnatural system of trucking bees around the country to pollinate our crops. This is something that I think has taken everyone by surprise. Third, maybe most fascinating of all, is the story of the honeybee itself. To understand the magnitude of the problem and what we’re losing, it’s important to appreciate how extraordinary these animals are, and the value of what they contribute to the planet. And to our plates!

Theories about the cause of CCD changed and expanded while you were in production and they continue to evolve now. How did that create challenges in the filmmaking process?

From the beginning we knew we were along for an uncertain ride — would we have an answer by the time production wrapped? But it was such a great detective story that we just stayed on top of the latest developments and maintained contact with all the key players to find out which theories they had crossed off the list and which they were still exploring. The biggest challenge, actually, was the research embargo. We knew our scientists had found something, but they couldn’t tell us what it was until the research was published. We were nearly finished with our edit by the time they were allowed to talk. So much of the time we were planning shoots based on our own hypotheses of what was going on.

Bee population decline has been recorded all over the world. How did you select the locations where you shot and the stories that you told in the program?

It’s true that bee populations are declining nearly everywhere, and not just from CCD. So we tried to target locations that served a purpose in the overall story. France stood in as a case study for pesticide use and its effects on bees. They have had some very intense clashes over this issue, and in fact have banned chemicals that we now use in the United States. We went to Spain because they have the highest number of commercial beekeepers in Europe, and last year they suffered massive bee losses. England was an example of controversy, where beekeepers claim they’ve lost up to two thirds of their bees, but the government still insists they don’t have a problem. We also went to China because in the south, there’s a region that sort of stands as a grim omen of what a world without bees could be like.

What are some of the practical and technical challenges of filming bees versus getting footage of larger animals?

Well, they sting. But the main thing is that they are very small and very fast. So because you’re focused on such a small area, you don’t have much latitude to move with them. It requires a great deal of patience. You set up your shot over a flower, for example, and you hope that eventually a bee will stop by and will stay within your focal range for a reasonable amount of time. When you’re shooting inside the hive, you really can only shoot for a short amount of time, because once the bees are stirred up, there’s really no calming them down. Bees also flap their wings at a speed faster than the known laws of physics can explain. We used the new Phantom HD high-speed camera to capture this at up to 1,500 frames per second.

What went into getting shots inside the hive?

The hive is really like one big organism, and we poked and prodded into it with a variety of borescopes and macroscopic lenses. The real challenge is that many of the most interesting behaviors happen on such a small scale that they can be incredibly difficult to capture. Olympus America generously brought out a new HD endoscopic camera normally used for examining the inside of a human esophagus — they wheeled it right out into a pumpkin patch in Pennsylvania for us and we stuck it in a hive. We also had the help of several very knowledgeable and patient beekeepers who were able to quickly find certain behaviors in the hives.

When shooting the hive scenes, your on-camera experts are all in protective gear and masks. Did the crew wear something too? Did people get stung?

We all wore bee suits, and learned very quickly to make sure we were completely zipped up. On our first shoot in Maine, it was pretty chilly, and the bees were looking for some warmth…inside our suits. We all got stung. The bees even attacked the windjammer on the mic because they thought it was a bear. Spanish bees are particularly aggressive, and in Andalucia we were wearing extremely thick, double-layered bee suits in 110-degree weather. No one got stung, but I think we all lost weight.

Once we became accustomed to being around the bees, we let our guard down a bit. I got stung again a few times in France and ended up with a temporarily deformed head. But we all still love bees.

For this production, did you put yourself through some kind of “Bee Boot Camp” to become familiar with the natural history of bees?

I started by reading as much as I could about honeybees and beekeeping in general, and there was much more to learn than I had anticipated. Bees and bee societies are incredibly complex. In the case of this film, all that information was just base knowledge, because the film was an investigation into CCD, not just the natural history of the bee. The real boot camp came on our first shoot with commercial beekeepers, actually seeing how the whole business works.

Do you have a favorite sequence in the film?

That’s tough, but I really like the scenes in Maine, where they’re distributing the hives in the blueberry fields, dealing with bear damage, etc. Every time people see this, they are blown away because very few people know this goes on. I also like the China sequence because what’s happening there is pretty hard to believe as well.

Did something end up on the “cutting room floor” that you wish made it into the film?

I wish we had more time in the film to spend with all the different beekeepers. They’re a special breed of people and their enthusiasm for the bees is infectious — by the end, we were all considering starting hives, ourselves. Unfortunately, because of the amount of information we had to wrangle into an hour-long film, many of these characters had to be cut for time.

What appealed to you about working for NATURE?

Well, I’ve always been a fan of NATURE, and as far as natural history programming goes, they are the best. This is something a little different for NATURE because it incorporates natural history into a more investigative, topical story. It was an appealing challenge to find a way to make that work, both thematically and stylistically.

Is there anything else you would like to add?

I think it’s important to note that the CCD scare has brought some overdue attention to the importance of bees, but bees and other pollinating animals have been disappearing for at least 20 or 30 years. This is just the latest example of a worldwide crisis that until now really hasn’t received the kind of attention that something like global warming gets. But pollinator decline is just as important — and just as worrisome.

To watch an interview with Doug on the The Alcove with Mark Molaro, click here.

‘Mystery of the Missing Bees’ Looks Back at Colony Collapse Disorder
How can you help the bees?
Silence of the Bees
Impact of CCD on US Agriculture
New Report Shows Modest Decline in Colony Losses (May 27, 2009)
CCD Update from Dennis van Engelsdorp (May 2009)
Interview: Dennis van Engelsdorp (June 2008)
Additional Resources
Update on Colony Collapse Disorder (Oct. 2007)