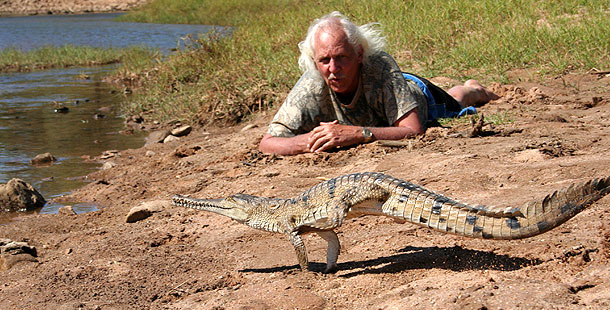 Rom Whitaker is a reptile conservationist who has spent the past 40 years conserving the most endangered crocs. Rom was on his way to Ethiopia in search of yet more supersize crocs when NATURE caught up with him to “talk crocs” in January 2007.

Q: What is it about crocodiles — and especially supersize crocs — that draws you to them?

A: As a kid I was hooked on dinosaurs. To me, the living reptiles became the next best thing. It was only natural that when I got older I entered the field of herpetology. While, to most people, crocs seem huge and dangerous, I could not help being sympathetic towards them as they were so vulnerable. Humans with guns could wipe them off the face of the earth. And I try to do my bit so the animals don’t disappear. The big ones are/were especially targeted by the hunters over the centuries and that is why there are so few left anywhere in the world of any species. The presence of huge crocs represents the lack of disturbance caused by humans to that habitat and perhaps that is what I’m really looking for.

Q: Do you remember your first encounter with a crocodile?

A: As a teenager I was an avid fisherman. I was 15 when I encountered a crocodile in Powai Lake in Bombay. It was night and I was looking at the float with a flashlight when a croc appeared. It was probably about 10 feet long but seemed bigger. The mugger crocodile came close to me, within touching distance, and we looked at each other in the eye before it disappeared. That eye contact stirred something inside me.

Q: Have you had any close encounters with crocs?

A: I have had hundreds of close encounters because of the amount of croc work I did in Papua New Guinea (PNG), Mozambique, Indonesia, etc. Iíve had to capture lots of crocs to measure and estimate the population structure. One particular incident stands out. Late one night I was doing a survey in PNG. We were catching small crocs, sexing (to find out the sex), marking and releasing them. For this kind of work we preferred an inflatable boat. The boatman would drive straight to a croc which I could catch and flip onboard. We had already done several that night when the boatman gunned the boat towards a croc and I grabbed it. It turned out to be a lot bigger than we had estimated. It was about six to seven feet long and I couldn’t handle it on my own. In the process of letting it go without getting bit, it gashed the boat. We managed go ashore before the boat went under.

Q: What are the biggest misconceptions people have about crocs?

A: People see crocodiles as huge, voracious, bloodthirsty, man-eating killing machines with insatiable appetites. Although crocs have a complex social life, they are in reality simple animals with small brains that are incapable of complex emotions. They are incapable of feeling anger, happiness, vengeance, etc. People have a similar attitude to snakes too.

Q: What do you hope viewers of Supersize Crocs get from the show — what message do you hope they take away with them?

A: For the people who are more aware of nature I hope they realize the importance of crocodiles as top predators of aquatic ecosystems. For the others, I hope they grow to appreciate these awesome creatures and I hope my fascination, empathy and admiration for these animals rubs off on them. In a little way this may help the crocs from being wiped out.

Q: Do you expect that finding supersize crocs will be easier in years to come? Or will we lose them entirely?

A: They’re likely found in some isolated places where the value of crocs is appreciated both ecologically as well as an economic resource, like northern Australia, and Lake Chamo in Ethiopia. In such areas tourism (to see a living dragon) could promote the continued existence of these huge reptiles.

Q: What’s your next croc-related project?

As co-chair of the Gharial Multi-Task Force, I have been working with other conservationists and organizations such as WWF to save the gharial, a unique long snouted crocodile found only in India and Nepal. The tremendous pressures on our river systems is going to wipe out all river dependent animals like river dolphins, otters, water birds and the gharial if something isn’t done. To this end, we are campaigning for better enforcement of gharial habitats, winning the local people over by providing them with alternate means of earning a living and so on.

I’m also working in Lake Chamo, Ethiopia to create a better management policy for crocodiles. There are poor people from six tribes living on the banks of the lake who exploit the fish resources. I’m currently exploring ways of promoting croc ranching, and tourism so these people can be directly benefited so they realize the value of crocs.

Q: Do some people have a hard time understanding your mission to help crocs?

A: Of course. Reptiles always get the worst end of the stick. They do not have the cuddle-factor that mammals and birds have and that works against them. One has to suspend the traditional ideas of cuteness when relating to reptiles!

Q: Have you found your supersize croc since the filming?

A: No. While on the project in Ethiopia I’ll be on the lookout for that 20 footer.

More From Supersize Crocs (4)
Explore more from this episode More