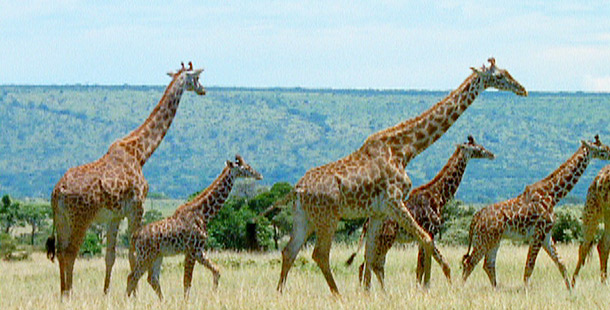 For centuries, biologists believed giraffes were the mute giants of Africa’s plains and forests — silent sentinels gazing to the horizon. In recent years, however, new techniques and technologies have allowed scientists to listen more carefully — and realize that giraffes may be talking after all. Just not in a way that we can hear.

Over the last few decades, biologists using special microphones, recording equipment, and computer analysis programs have realized that whales, elephants, and some other animals were using extremely low-frequency sounds — far below the range of human ears — to communicate.

These low-pitched sounds are known as “infrasound,” and they have at least one remarkable property: they can travel farther than higher-pitched noises through the air and earth. Such long-distance communication is a must for animals, such as giraffes or elephants, that can be spread over vast territories. Elephants, for instance, may be able to communicate with other animals up to several miles away.

Studying infrasound, however, is difficult. In part, that’s because so many things produce infrasound, from rumbling earthquakes and thunder storms to trains and cars. Sorting out wild sounds from the background noise can be nearly impossible. But by doing studies in zoos, where researchers can partly control experiments, scientists have been able to document the existence of infrasound and show that animals appear to be using it to communicate.

TALL BLONDES documents the work of one of these sound scientists. In 1998, Elizabeth von Muggenthaler of the Fauna Communications Research Institute in North Carolina and a group of colleagues announced that they had found evidence that giraffes use infrasound to communicate. In part, Muggenthaler had taken on the study — done on 11 giraffes at 2 zoos in North and South Carolina — because she had studied the use of infrasound by the Okapi, a relative of the giraffe. It would be natural, she thought, for the giraffe, which shares many behaviors with the Okapi, to also share the use of low sounds.

In their zoo study, the researchers noticed that the low sounds picked up by their microphones seemed to coincide with two behaviors: the “neck stretch,” where giraffes throw their head and necks back over their bodies; and the “head throw,” in which the animals lower and then quickly raise their chins. How exactly giraffes make the low, huffing noises is unclear, however. The researchers think the answer lies in studying how air moves through the giraffe’s long neck.

In a recent interview, Muggenthaler discussed her work trying to listen to the unhearable:

Elizabeth von Muggenthaler: It is a such a hard thing to do. You can’t hear infrasound, so you are relying totally on your microphones and computerized analysis systems to detect it. Then, there are so many other things that create infrasound — from water and wind to cars and trains — that you have to be able to eliminate what you don’t want. The environment has to be very good where you are recording. It’s hard to do in the field.

NATURE: What tipped you off that giraffes might be using infrasound?

EVM: Well, here is an animal that is very social, they hide in forests [making visual communication difficult], and they hide their young during the day while foraging. They are hunted by other animals. But they were considered mute. Right there is your clue — there are no animals [that have such behaviors] that are mute. They wouldn’t survive if they couldn’t communicate.

Also, if you look at giraffes’ ears, you know something is going on. Their ears are like parabolas and they have [features] that suggest they can tune in on sounds.

NATURE: What would it take to study the giraffe’s use of infrasound in the wild?

EVM: Well, you would really need an array of microphones, so you’d be able to detect if it’s the giraffe or not. It would be a very expensive study.

EVM: It’s just that we humans are so limited. I knew I wanted to study animal communication [in college] and I liked the elephant [infrasound] studies [that other scientists had done]. So I tried to replicate that and ended up at NASA, renting equipment. It was while I was recording the elephants that I got the rhinos. [Editor’s note: In 1992, Muggenthaler documented the use of infrasound by rhinos.] It’s just that there is this world of crazy stuff going on with sound. There is this unseen world out there, and I want people to know it exists.