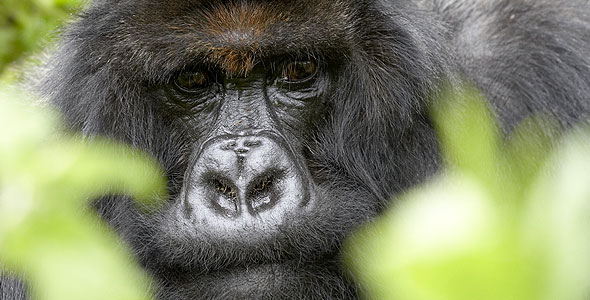 It was from a small hut in Rwanda that researcher and conservationist Dian Fossey observed that while gorillas may sometimes act tough, they are really gentle giants.

Fossey is one of the most famous scientists in the world, but her path to greatness was a meandering one. While she had always been interested in animals, her bachelor’s degree was in occupational therapy. One year, after hearing stories and seeing pictures from a friend’s vacation in Africa, Fossey decided that she would visit there herself. In 1963, she gathered all of her savings and took out a three-year loan. She set a course for Africa, planning stops in Kenya, Tanzania, Congo, and Zimbabwe. She didn’t know it yet, but this trip would change her life forever.

At Olduvai Gorge in Tanzania, one of the final stops on her journey, Fossey met archaeologist Louis Leakey. During the visit, Dr. Leakey told Fossey of Jane Goodall’s research with chimps, which at that point had just barely begun. They also discussed the importance of long-term research on the great apes. Fossey later said that this meeting planted the idea in her head that she would one day return to study the gorillas of Africa.

Fossey began her long-term study of mountain gorillas in 1966, eventually establishing her “Karisoke” Research Center camp on Sept. 24, 1967, in an area between Mt. Visoke and Mt. Karisimbi, merging the names of the two volcanoes to create the name “Karisoke.”

She lived among the mountain gorillas for nearly 20 years keeping detailed journals to record everything she observed, and forging close relationships with individual gorillas as she gained their trust. She shared her thoughts and the results of her findings with the world, teaching us that gorillas are not monsters but social beings full of curiosity and affection. Her work paved the way for international support of mountain gorilla conservation and research, but her life was tragically cut short as a result of her efforts. She was found murdered in her cabin in Karisoke on December 26, 1985.

In 1988, the life and work of Fossey were portrayed in a movie based on her book. In the film Gorillas in the Mist, Sigourney Weaver starred as Fossey and later became the honorary chairperson of what is now the Dian Fossey Gorilla Fund International.

The film started a wave of curiosity about mountain gorillas and started a whole new industry of “gorilla tourism,” which has been a financial boon for conservation efforts, as well as a deterrent against poachers fearful of being discovered.

Fossey and Other Close Encounters

Just last year, in the Bwindi National Park in Uganda, a group of eight tourists quietly observed a family of mountain gorillas just a few yards away. After fifty-five minutes, a large male approached one of the tourists and gave him a big “high-five.”

“The gorilla probably approached him because he had a lot of body hair,” said Chuck Nichols, who ran the two-week gorilla tour in Uganda. Nichols owns a tour company based in Moab, Utah that specializes in small-group adventure tours around the world.

“The gorillas are not scary,” Nichols said, explaining that, actually, he has to make sure the gorillas are not the ones running scared. “A tracker must accompany the group, and people are only allowed to observe the gorillas for one hour,” he said. He also makes sure the groups are healthy since he does not want to stand the chance of passing on infectious diseases to the animals.

Sadly, these peaceful animals may not survive into the next century. Ape conservationists say time is running out, as there are only about 720 mountain gorillas left in the world, and the majority of gorilla populations are plummeting.

From the beginning, Fossey focused attention on the gorillas’ plight and saw clearly that they were doomed unless people could learn how to share forest resources with these great apes. She understood that they needed our protection if they were to survive, and gave her life in the struggle to protect them from poachers.

Like Fossey, biologists are becoming activists by necessity and are putting their lives on the line to save these great apes. In fact, conservation professionals and many national park staff have lost their lives in the course of duty because until now, their efforts have been poorly enforced. Today, ape conservation organizations, like the Great Apes Survival Project (GRASP) have come together to partner with Fossey’s Gorilla Fund in a last-ditch effort to unify existing conservation efforts.

In the mountains east of the Congo River Basin, human-transmitted pathogens have taken a heavy toll, and the hope is that GRASP will succeed in protecting the gorillas. Gorillas are closely related to humans and susceptible to the same diseases that we are; however, they have not developed the immunities to resist human diseases, making them vulnerable to infections that could spread and severely deplete an entire population.

Habituated gorilla groups (those that are visited by tourists) have the greatest risk, which is why tourists are not permitted to go near the gorillas if they feel sick. But, according to Melanie Virtue, a team leader for GRASP, this is hard to enforce, especially due to the amount of money that is spent to view these animals.

“You can imagine that a tourist traveling a great distance to see these animals, of which they have probably dreamed their entire lives, is going to be quite hesitant to say, ‘No, I am not feeling well and don’t want to endanger them,'” Virtue explains.

Today, the Karisoke Research Center that Fossey established is conducting a Tourism Impact Study, using both behavioral and physiological data (urine and fecal samples) to assess the impact of tourism on the Virunga mountain gorilla population.

“Almost certainly the biggest factor in the conservation success with this species has been the income they generate from gorilla tourism, so if you can afford it, going to see these amazing animals in the wild really is helping to ensure their survival,” said David Jay, senior officer of Born Free, an ape conservation organization that works with GRASP.

The future of these great apes will certainly depend on tourists’ interest in seeing these apes first-hand and that people show continued concern for their safety, according to Jay.

Fossey had the courage to follow gorillas among the steep ravines of a 14,000-foot volcano over 40 years ago, and so made it possible for all of us to follow in her footsteps.

Running With The Herd: A NATURE Short Film
Deep Jungle: The Beast Within
The Last Orangutan Eden
Natural Born Rebels | Episode 1| Hunger Wars
The Elephants of Africa
My Congo