The Himalayas stretch across the northeastern portion of India. They cover approximately 1,500 mi (2,400 km) and pass through the nations of India, Pakistan, Afghanistan, China, Bhutan and Nepal. The Himalayan range is made up of three parallel ranges often referred to as the Greater Himalayas, the Lesser Himalayas, and the Outer Himalayas.

View The Himalayas in a larger map. 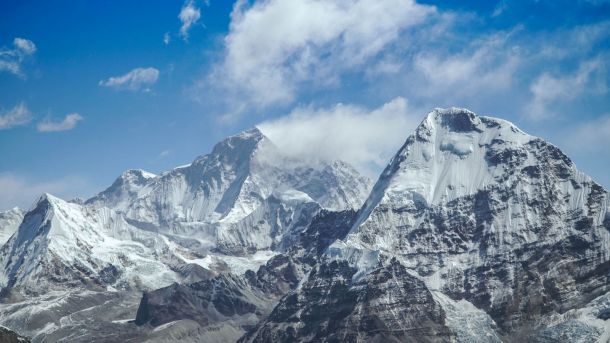 Photo by Bisesh Gurung on Unsplash.

While intimidating mountains like Everest and 2K tend to dominate our perceptions of the region, the Himalayas are rich in biodiversity. Climates range from tropical at the base of the mountains to perennial snow and ice at the highest elevations. These complex and diverse eco-regions are interconnected: an ecological threat to one is ultimately a threat to many. Here are just a few examples of Himalayan ecology:

Western alpine shrubs and meadows can be found between 9,850 and 16,400 ft. These areas tend to have cold winters and mild summers that allow for plant growth. Rhododendron plants cover the lower shrublands, while the alpine meadows, directly above, host a range of flora in the warmer months. Animals found in this region include the snow leopard, Himalayan tahr, musk deer, and pikas.

Temperate Coniferous Forest:
In the northeast, temperate sub-alpine conifer forests are found at elevations of 8,200 to 13,800 ft. Located in the inner valley area, these forests are protected from harsh monsoon conditions by surrounding mountain ranges. The dominant tree types are pine, hemlock, spruce, and fir. Animals found in this region include red pandas, takins, and musk deer.

Temperate Broadleaf and Mixed Forests:
Found in middle elevations of 6,600 to 9,800 ft. in the eastern region are broadleaf and coniferous forests. These forests receive almost 80 inches of annual rainfall, mostly during the monsoon season. In addition to indigenous oaks and maples, plants like orchids, lichen, and ferns also grow in the area. A huge range of wildlife, including over 500 species of birds, are found here during the cooler seasons before they migrate to higher elevations to escape the hot summers. This is also the primary home for golden langur monkeys.

The Himalayas are the source for the Indus, the Yangtze and the Ganga-Brahmaputra. All three are major river systems for the continent of Asia.

The main rivers sourced in Himalayas are the Ganges, Indus, Yarlung, Yangtze, Yellow, Mekong, and Nujiang.

The Himalayas are the third largest deposit of ice and snow in the world, after Antarctica and the Arctic. There are approximately 15,000 glaciers located throughout the range. At 48 miles (72 km) in length, the Himalayan Siachen glacier is the largest glacier outside the poles.

Other notable glaciers located in the Himalayas include the Baltoro, Biafo, Nubra, and Hispur.

Clip | The Himalayan Jumping Spider
Clip | The Bear and the Fox
Graphic: Anatomy of a Glacier
The Himalayas - Preview
The Disappearing Glacier: Climate Change and Himalayan Ecology
Tectonic Motion: Making the Himalayas

Rhinoceros
Encountering Sea Monsters
Soul of the Elephant
Clash: Encounters of Bears and Wolves
The Cheetah Orphans
Song of the Earth with David Attenborough