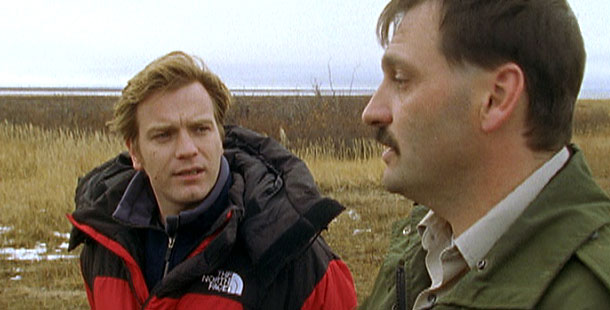 Wayde Roberts is a Natural Resource Officer at Manitoba Conservation in Canada. He’s been working with polar bears for more than 10 years and in 2002 spoke to NATURE Online about his work in Churchill, known to many as the polar bear capital of the world.

What brought you to this line of work?

My family all did bush-related work, and I’ve wanted to do this kind of work ever since I was a kid. I grew up in the province of Manitoba and did a stint in Churchill working with Manitoba Conservation beginning in 1987, working for four or five straight seasons. I left the north and then returned, as an officer in Churchill, in 1996 to work with the polar bears. Basically, I’ve seen the abuse to the environment that goes on and have always felt like I’d do better by protecting natural resources than by using them.

In typical town patrol, I’m up at daylight and patrolling with four other colleagues. There’s a control zone that’s set up, which is basically a border around the town of Churchill. If any bears pass through it, we try to capture them. When the bears move around a lot, we get very busy and may handle 12 to 14 bears before noon on any given day. Obviously, the idea is to create and maintain a separation between the bears and humans.

When we need to capture them, we set up a snare line, usually at the perimeter of the town dump, a place that has a lot of attractants for the bears. Then, we’ll trap them in a Culver Trap, or free-range them, meaning we’ll dart them with a tranquilizer gun. Once they’re drugged, we can keep as many as 22 bears in our holding facility before flying them north.

Have you ever had an unexpected run-in with an angry polar bear in which you felt you were in danger?

Once, when I was inside the bear-holding facility, I turned around and there was a polar bear 15 inches from me. There were a few scary moments before it ran away.

What should people do if they unexpectedly run into a polar bear — besides call you?

Well, the people in Churchill are very good and very helpful. We have a 24-hour-a-day Polar Bear alert line, which people can call to report bears that are inside the control zone. There’s a lot of education that we do, giving talks in schools and such, to try to give people the kind of information that will prevent them from getting into trouble. For example, leaving garbage out unsealed is one of the most dangerous things you can do; garbage is a natural attractant for the bears.

How do you tag the bears and what’s the purpose of doing so?

Once we tranquilize the bears, we tag their ears and give them lip tattoos with unique numbers to identify them. We’ll take a sample for DNA analysis, give them antibiotics if they have any cuts to prevent infection, and record their age if known. If we don’t know the age, we can extract a pre-molar, which the bear doesn’t need, to determine the age. With all this information, we create a “Bear Bible” for each animal. The Canadian federal government keeps all of this in a database, so we can track any individual bear’s progress from season to season.

Polar bears seem to be solitary animals. Do they not adhere to traditional family structures?

They are social animals up to a certain age, especially when you’re dealing with a mother and her young cubs, which is a dangerous kind of group to be around. Other than that, they are quite solitary.

According to some reports, the Earth’s average temperature may rise 3-5 degrees in the next 50 years, meaning the bears will have to fast for even longer before the ice freezes and they can return to hunt for food. What do you think the long-term effects will be?

Do you think that humans and bears can continue to live harmoniously in such proximity to one another?

Oh, definitely. In fact, the mortality rate for bears because of bear-human interactions is down significantly. Now we average one bear death a year, whereas years ago, it was closer to seven bears annually. And just as importantly, from the human perspective, we have not had a bear-related human fatality since 1986. So, bears are not hurting people and people have not been hurting the bears.