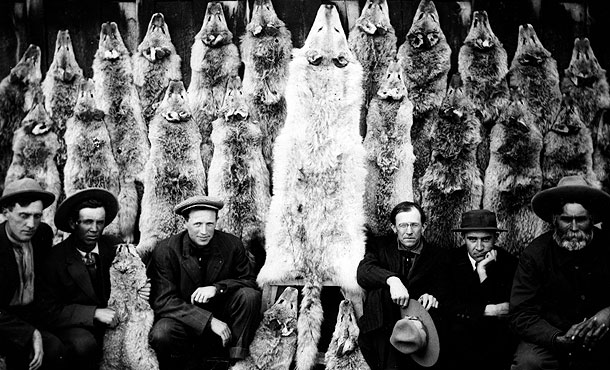 Wolves have been feared, hated, and persecuted for hundreds of years in North America. Before the arrival of Europeans, Native Americans incorporated wolves into their legends and rituals, portraying them as ferocious warriors in some traditions and thieving spirits in others. European Americans, however, simply despised wolves. Many, including celebrated painter and naturalist John James Audubon, believed wolves ought to be eradicated for the threat they posed to valuable livestock. This attitude enabled a centuries-long extermination campaign that nearly wiped out the gray wolf in the continental United States by 1950.

In the New World, two top predators – wolves and men – that otherwise would have avoided each other clashed over livestock. In Vicious: Wolves and Men in America, Jon T. Coleman writes:

Wolves had a ghostly presence in colonial landscapes. Settlers heard howls, but they rarely spotted their serenaders. The fearsome beasts avoided humans. People frightened them, and colonists knew this: “They are fearefull Curres,” reported Thomas Morton in 1637, “and will runne away from a man (that meeteth them by chance at a banke end) as fast as any fearefull dogge.”

Because humans and wolves frightened one another, they logically avoided confrontation, opening space between the species. But that space closed when European colonists brought horses, cattle, sheep and pigs with them over the perilous journey across the Atlantic. Without these animals – sources of food and transportation for the European settlers – the colonies would have failed. But because most early colonial communities were small, livestock often grazed on the periphery of the settlements with little protection. Their pastures abutted and bled into the wild, exposing the animals to hungry wolves in search of prey. Wolves quickly learned that docile cattle and sheep made easy meals. Suddenly, colonists found their livelihoods in danger, and they lashed out at wolves, both with physical violence and folklore that ensured wolf hatred would be passed down from one generation to the next.

The campaign to eradicate wolves in North America began with private landowners and farmers baiting and trapping wolves. Often, colonists turned wolf baiting into both sport and protection for their livestock. Jon T. Coleman describes an incident that took place in the winter of 1814 deep in the Ohio River Valley, in which John James Audubon assists a farmer as he mutilates trapped wolves.

During the fall, a pack of wolves had robbed [the farmer] of “nearly the whole of his sheep and one of his colts.” For him, it made sense to devote his winter labor to digging pits, weaving platforms, hunting bait, and setting and checking his traps twice daily. The animals had injured him, and “he was now ‘paying them off in full.’” Audubon’s reaction to the slaying of the wolves is less understandable … The ingenious pit traps amazed him, as did the fearsome predators’ meek behavior and the childlike glee the farmer took in his work. The violence Audubon witnessed, however, did not shock him. Watching a pack of dogs rip apart terrified and defenseless animals was a “sport” both he and the farmer found enjoyable.

Further west, in Yellowstone National Park, wolf baiting and hunting had become a lucrative profession. Paul Schullery, in his guidebook to Yellowstone wolves (The Yellowstone Wolf: A Guide & Sourcebook), describes the profession and the devastating affect it had on the Yellowstone wolf population: “At least as early as 1877, ungulate carcasses in the park were poisoned with strychnine by free-lance ‘wolfers’ for ‘wolf or wolverine bait.’ By 1880, [Yellowstone National Park] Superintendent [Philetus] Norris stated in his annual report that ‘…the value of their [wolves and coyotes] hides and their easy slaughter with strychnine-poisoned carcasses have nearly led to their extermination.’”

In the Southwest, as settlers depleted bison, elk, deer, and moose populations – the wolves’ natural prey – the predators turned more and more to picking off livestock. In states like New Mexico where cattle ranching was big business, ranchers responded by turning to professional wolfers and bounty hunters. The U.S. Fish and Wildlife Service reports, “To protect livestock, ranchers and government agencies began an eradication campaign. Bounty programs initiated in the 19th century continued as late as 1965, offering $20 to $50 per wolf. Wolves were trapped, shot, dug from their dens, and hunted with dogs. Poisoned animal carcasses were left out for wolves, a practice that also killed eagles, ravens, foxes, bears, and other animals that fed on the tainted carrion.”

Towards the end of the 19th Century, wealthy livestock owners increased both their demand for wider grazing ranges and their influence over policymakers in Washington, D.C. In 1885, the federal government established the U.S. Bureau of Biological Survey, initially chartered to research insects and birds. However, the livestock lobby quickly diverted the Bureau’s attention to wolves. Stockowners complained that their land was infested with wolves, calling them “breeding grounds.” They demanded the federal government secure their land for safe pasturage.

In 1906, the U.S. Forest Service acquiesced to the stockowners and enlisted the help of the Bureau of Biological Survey to clear cattle ranges of gray wolves. In other words, the Bureau became a wolf-extermination unit. Bruce Hampton writes in The Great American Wolf:

That same year [1906], bureau biologist Vernon Bailey traveled to Wyoming and New Mexico to investigate the extent of wolf and coyote depredations. Upon Bailey’s return to Washington, D.C., President Roosevelt invited him to the White House to see what he had learned. Although there is no record of their conversation, immediately following Bailey’s meeting the President, the Biological Survey recommended that the government begin “devising methods for the destruction of the animals [wolves].”

By the middle of the 20th Century, government-sponsored extermination had wiped out nearly all gray wolves in the Lower 48 states. Only a small population remained in northeastern Minnesota and Michigan. Yet the Bureau of Biological Survey was still disseminating anti-wolf propaganda as late as 1940. One poster from the time read:

According to estimates of stockmen [the Custer Wolf, pictured in the poster] killed $25,000 worth of cattle during the seven years he was known in the vicinity of Custer, South Dakota … A local bounty of $500 failed to secure his capture. A Department hunter ended his career of destruction by a skillfully set trap. Many notorious wolves are known to have killed cattle valued at $3000 to $5000 in a year. More than 3,849 wolves have been destroyed by the predatory animal work of the Department and its cooperators since the work was organized in 1915.

It was not until the late sixties, when a greater understanding of natural ecosystems began changing attitudes in the scientific community and the National Park Service, that the plight of wolves in North America began to improve.

In 1973, Congress gave gray wolves protection under the Endangered Species Act. According to Douglas Smith and Gary Ferguson, in Yellowstone National Park, where the last gray wolf was killed in 1926, “the entire [gray wolf] restoration program was guided by directives contained in the Endangered Species Act – a law created to ground a decades-old cornerstone of science that says the healthiest, most stable natural systems tend to be those with high levels of biodiversity.”

Since then, wolf populations throughout the country have increased. In 1995 and 1996, researchers in Yellowstone National Park released 31 Canadian gray wolves back into the wild. The event was hailed as a testament to the conservation movement’s efforts to revive wild wolf populations in America. Yet antiwolf attitudes persist. Shortly after the release of the Yellowstone wolves a hunter shot and killed Wolf Number 10. Smith and Ferguson write about the incident: “As disturbing as the shooting itself was, more unsavory still was the reaction of a handful of locals who cheered the killing, calling it an act of heroism.”

Robinson, Michael J. Predatory Bureaucracy: The Extermination of Wolves and the Transformation of the West. University Press of Colorado, 2005.

Smith, Douglas W. and Gary Ferguson. Decade of the Wolf: Returning the Wild to Yellowstone. Guilford, Connecticut: The Lyons Press, 2005.