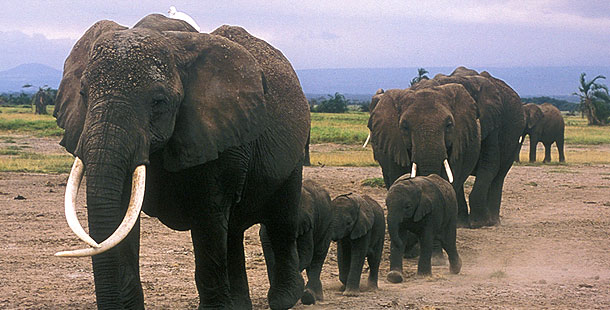 Highly intelligent, emotional, and expressive animals, it is little surprise that elephants live by social rules that are intricate. So complex and layered are they, that in elephant society males and females live in completely different worlds, with females dwelling in tightly bonded families that stay together for life, and males living a largely solitary existence.

Elephant families like Echo’s EB family are matriarchal societies. Within this structure, the matriarch, or lead female, rules over a multi-generational family of 6 to 12 members, most of which are her offspring, her sisters and their offspring. In Echo’s family, her sister Ella and daughters, Enid and Eliot help her keep the family in order along with her nieces, Emma and Eudora, her granddaughters, Edwina and Eleanor, and great-niece, Elspeth. Sadly, as the film documents, Erin, Echo’s daughter, was speared by humans and died. A tight-knit family like the EB works very cooperatively. They feed, rest, and move as one unit. Together they defend the family, search for food and care for offspring. Closely-related females will even cross suckle each other’s calves and some females will lactate indefinitely, taking on a wet nurse role in the family. Enid, Echo’s oldest daughter, has a natural mothering instinct and love for calves. She was an allomother, or babysitter, to her younger brother, Ely.

As tight-knit as they are, if an elephant family gets too large, it can split in two. This actually benefits both families as each can forage for resources more effectively if they take on different territories. Typically, such a split would take place between cousins, and usually not sisters or mothers and daughters. These split families, or “bond groups” can average 28 related elephants in 2 to 3 family units. The related groups will continue to associate and occupy the same home range, staying within a mile of each other and keeping in touch through rumbling calls.

Though all members of the family are essential for the group’s success, it is the mighty matriarch who assumes the most critical role. Typically the oldest and largest female member of the family, it is not uncommon for the matriarch to be a close relation to the previous matriarch. To succeed in her role, the matriarch brings years of experience and natural skills at leading her family and keeping all of its members together. She also has a sharpened memory of places and individuals. The adage that an elephant never forgets has some truth to it. An old female can remember where her mother or grandmother took her for water during a drought 30 years earlier, the sort of historical information that can save a herd during hard times.

Matriarchs are charged with making decisions that ensure the family’s safety, health and survival. Tapping into her years of wisdom and experience, she decides when and where to feed, when to move along, when to fight and how. Her influence is so great that if a matriarch is shot by poachers, the herd will likely remain by their fallen leader and be shot as well. In the case of Echo and her famous EB family, Echo’s regularity and as Martyn Colbeck explains, predictability may have saved the lives of the family members. During the 1970s and 1980s, the area outside of the park had a dark history of poaching of elephants traveling in large groups. Echo’s insistence on keeping her family within the range of Amboseli Park kept them safe from poachers. Deferring to the experience of a wiser and older member and forming nearly unbreakable bonds allows for the exchange of critical survival skills to the next generation.

One method elephant society has evolved to keep the family robust and healthy is by forcing out males once they reach puberty-a measure that protects against inbreeding. As they grow older and approach puberty, males, or bulls, grow increasingly independent of their family. They will eventually break off from the group, usually at around 12 years of age. Unlike the highly social females, bulls will live a solitary life, forming relatively few close and long-lasting bonds with other elephants. They travel alone or congregate with a herd of two to 14 bulls, occasionally joining a family on a temporary basis. During the breeding season, bulls wander widely, searching for receptive females. After mating is over, they leave the family and either rejoin a bachelor herd or go back to a life of solitary wandering.

Humans have had a devastating influence on elephant society. As humans kill off vast numbers of elephants and encroach on their habitats, elephants grow increasingly anxious, disoriented and, at times, violent. Since older, larger animals are more likely to be targets for poachers because their tusks are largest-and these are also the members of the family with the most critical role– killing these individuals damages entire family units for years. Due to poaching, the number of older matriarchs and female caregivers has drastically fallen, and some elephant groups contain no adult females whatsoever. The number of elder bulls, who play a significant role in keeping younger males in line, has also fallen. All of this damage within elephant societies leads to incidents of “elephant rage” or attacks on humans and their property. By understanding how killing one elephant reverberates through elephant society, humans may come to realize how great an effect they have on elephants, and on other humans.