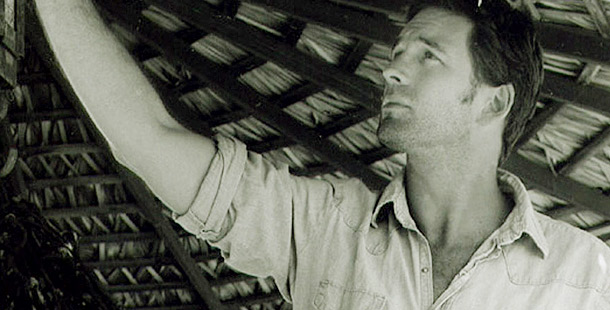 More than a decade ago, Wallace J. Nichols had the idea to satellite-tag an adult female loggerhead sea turtle named Adelita. Over the course of about a year, Adelita, Nichols and a great many internet onlookers made a 9,000-mile voyage from Mexico across the Pacific to nesting grounds in Japan. Adelita was the first animal ever tracked across an ocean basin, turtle or otherwise. Her story was also the first discovery that loggerheads make such a long journey to nest. NATURE spoke with Nichols on the ten-year anniversary of the trip.

Q: WHO WAS ADELITA?

A: Adelita was a loggerhead sea turtle who was caught by a fisherman in the Gulf of California. She was raised in captivity. We weren’t quite sure how old she was. We think she was just a few years old based on her size. She was as big as a large plate. Mexican researchers eventually got a hold of Adelita and decided to put her in captivity. People were still-hunting and eating turtles so they felt that would be safer for her. She became part of genetic studies for a few years.

WHY DID YOU DECIDE TO RELEASE HER AND FOLLOW HER JOURNEY?

I was a graduate student studying these turtles in Baja. We started asking where all of these loggerheads in Baja were coming from, so we started searching for a loggerhead-nesting beach. We knew there was a nesting beach in Japan but thought that was way too far for loggerheads to journey to. So we had a big mystery on our hands. How did they make that trip?

Adelita had been facing a life in a tank in a research facility. As she grew, we knew we were not prepared to hold a growing loggerhead. So we had very few options. We could hold her indefinitely in captivity or release her. We decided it would be great to get Adelita out.

At the time, people were starting to use satellite telemetry but the early efforts were not so successful. Transmitters are expensive but I had a recycled transmitter and decided to try using it for Adelita’s journey. A fisherman helped me figure out how to attach this transmitter to a turtle shell. But we had no idea if this would work if the transmitter would fall off or the batteries would go dead.

WHAT DID YOU THINK WOULD HAPPEN? WHERE WOULD SHE GO?

There were lots of unknowns. First of all, she had lived most of her life in captivity so she could just have revealed that captive turtles do odd things. We didn’t know if she could survive in the wild. But we knew she was healthy. She would eat anything dead or alive. If your sunglasses fell in the tank, she would eat those. Basically, she would eat whatever she found. Turtles are not particularly social animals. There’s no pod she would have to join. There’s no parental care. They are somewhat carnivorous. They’re also highly instinctual. She was very healthy in terms of fat storage. And we knew she was sexually mature because she was big enough. My concern was: was she in good enough shape for it?

WHAT WERE THE FIRST MOMENTS OF THE JOURNEY THAT YOU WITNESSED LIKE?

It was pretty amazing. This turtle spent all of her time in tanks 10 feet in diameter across. When she first got out of the tank, she kept swimming around the outside of the tank and stopping as if she was planning on hitting a wall. But there was no wall. I took a video of her swimming away. It’s pretty interesting. At one point, when she realized nothing was holding her in, she just took off. She went out into the Pacific Ocean and just swam across it; she swam continuously for 368 days. What was interesting was that in captivity she was always hanging out on the west side of the tank-the direction of Japan.

HOW DID THE INTERNET PLAY A ROLE IN HER JOURNEY?

At the time, the internet was new so it was a new tool we had of letting people know what Adelita was doing along her journey. It was one of the only live shows on the web at the time. But it’s pretty amazing to think about people stopping their day and thinking about what Adelita was doing. It’s pretty mind-blowing. It changes people’s perspective and helps them understand how big the Pacific Ocean is.

Also, I needed to share the data I was getting. I could sit there and accumulate data on my hard drive or share it. It became my responsibility to share the information and to answer questions. So for about a year, I had 50 students a day emailing me questions about Adelita.

WHAT DID YOU LEARN FROM ADELITA?

The East Pacific Barrier between Japan and Mexico is known as the East Pacific Desert. It’s an unproductive clearwater. It was thought that animals couldn¹t cross because it was so unproductive. The idea was that this was a barrier. Turns out to be completely wrong. Adelita was the first piece of the puzzle proving that was wrong. Now we know lots of species do the same thing. And now, all kinds are being tracked through the Pacific. It’s revolutionary in terms of the number of animals being tracked and what we know about the ocean today.

WHAT EFFECT HAS ADELITA HAD ON TURTLE CONSERVATION?

Adelita has raised this idea that all of these places are connected in the life history of a turtle. This was not something people knew about so much. Now it¹s just standard but back then it was a big lesson.

Adelita changed the way people in Baja and Mexico and Japan thought about sea turtle conservation. This turtle has opened up all kinds of connections between Japanese, Mexican, American people. We need to collaborate with people at the other side of the planet. Protecting nests in Japan only will get us poor results if the turtles are not safe in Baja.

What we learned from Adelita has also changed the way fishermen think about sea turtles. The animals themselves are more interesting to them. Given the opportunity to leave them alive rather than cut them open, take out their liver and throw them back in ocean, they might leave them alive now.

HOW MUCH DID YOU KNOW ABOUT WHERE ADELITA VENTURED ALONG HER JOURNEY?

We didn’t know exactly what Adelita was doing but we were pretty sure about where she was. The satellite tracking of the locations were really accurate — up to 150 meters. You could draw a circle and she’d be in it-about as large as a football field. This is pretty tight when you think in terms of the entire Pacific Ocean. Most of the time, Adelita was in very deep water, not close to the bottom. When she was closer to the coasts, it was a bit different. We knew she would encounter females or rest in caves.

DID YOU WORRY ABOUT HER SAFETY?

Once Adelita started swimming to Japan, I was worried about her daily. She’s trying to swim home and all sorts of threats face her. I experienced hope and fear imagining where she’s going. Every day, not knowing if that would be her last day, was emotional. Maybe the transmitter would fall off. Or the battery could go dead. But unbeknownst to her, millions of kids were hovering over their computers to track her journey. It felt like we were all on her back.

HOW DID YOU LEARN OF THE END OF HER JOURNEY?

Finally Adelita made it to Japan and the hope was that she would find a mate and lay eggs that would become hatchlings. But that’s not the way it worked out. At the time, I wasn’t sure what had happened. The data was erratic. Eventually I went to Japan and went to the last location where she was recorded. It was a fishing port with squid fishing boats. The fishermen told me that summer they had caught a lot of loggerheads so Adelita could have been caught by a fisherman. But it was still fuzzy. Maybe she was caught and the transmitter pulled off. Maybe she was thrown back in. I didn’t want to come out and say Adelita is dead.

But I started to see this as an opportunity to tell a real story. Once they’ve reached maturity, they’re out of reach of predators except for sharks and their biggest threats are hooks, nets and plastic bags. The reality is that turtles die in nets and on hooks. So here was this opportunity to tell that part of the story.

WHAT DOES YOUR RESEARCH FOCUS ON NOW?

The focus is on protection for the key areas of their life cycle. Over the years, people have concentrated on nesting beaches and I think we need to couple that with protecting feeding areas because by-catch rates in Mexico in these places are really high. So we’re working on getting a federal-reserve designation for a Baja feeding hotspot. We¹re working with the Mexican government to declare it a marine conservation environment. And we’re working with the fishermen, who are actually really in favor of it. One thing we’re doing is we’re working on ecotourism opportunities: if fishing opportunities are taken from the fishermen, we can work on other financial incentives, like whale-watching tours.

THE FILM WASN’T ABOUT ADELITA BUT IT WAS BASED ON HER VOYAGE, WHAT DID YOU THINK ABOUT THAT?

Adelita’s journey is a really inspiring story. Her story connects Asia, Latin America, and the US. It gets into people’s hearts and minds. But what’s compelling about it is that it’s a real story; not a Hollywood story. The trend in nature filmmaking is to show the edgy, dangerous situations. I’ve been asked, “Can you show me turtles getting eaten by a shark or turtles gone bad.” But this film is just the voyage of a lonely turtle. It’s just that. It’s not about being edgy. It’s a peaceful story. It isn’t trying to be MTV. At the same time, this feels fresh. It’s an epic, transoceanic story with incredible footage.

Adelita was really just the beginning. We’re in the middle of this. She was by no means just a one-off.