BOB ABERNETHY: Alarmed by the proliferation of hate Web sites available on the Internet, the Anti-Defamation League sponsored a symposium in Washington this week to address the growing concern. Joined by representatives of America Online, the ADL called for new warnings on the ‘net. 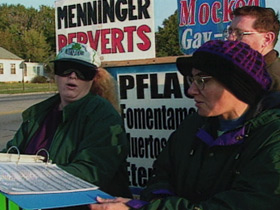 Mr. ABRAHAM FOXMAN (Anti-Defamation League): Find a way to alert people you’re entering a hate zone. It’s not about censorship. It’s about exposure, it’s about education, it’s about informing the public what’s out there.

ABERNETHY: More on the spread of viciousness in cyberspace in our Cover Story this week. Our correspondent is Jed Duvall. One note of caution: some of this material is disturbing and offensive.

JED DUVALL: Members of this virulently antigay group could not possibly get their message very far out of Topeka, Kansas, where they regularly picket local churches. Might never get the word out, that is, except for the Internet. Now they can reach a potentially vast audience. Ben Phelps is the group’s computer expert.

Mr. BEN PHELPS: In places where it would be impossible for us to go, they’re still seeing our pickets by looking at this Web page.

DUVALL: Among the roughly two million sites on the Internet are a few hundred that spew hate of all sorts, from Aryan supremacy to violent anti-Semitism. Rabbi Abraham Cooper leads the research into [the] Internet at the Simon Wiesenthal Center. 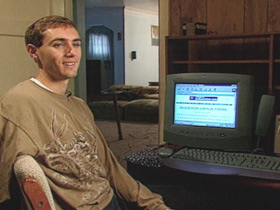 DUVALL: You can click on a war game where the targets are blacks and Jews.

Rabbi COOPER: As you can see, that the policeman or whoever he was — the soldier was actually wearing earlocks of a Hasidic Jew. When you shoot him dead, you’re going to get a bonus.

DUVALL: There is hate and there is hate music, lyrics of venom singing of a racial war to come.

Offscreen Voice (Singing): By the blood of our fathers, by the seeds of our sons, by the blades of our lions, and by the bullets in our guns.

DUVALL: Set to a beat designed to lure the young.

Rabbi COOPER: All the investigators tell us that in the last year perhaps they’ve sold 50,000 CDs and records off of that one site.

Mr. DAVID FRIEDMAN (Anti-Defamation League): Ten years ago, if a member of a hate group wanted to spread their propaganda, they would have to use a piece of paper like this. They’d have to hand it out under the cover of darkness, put it under a windshield wiper. It’s a new ball game in 1997. Today, for virtually no money and with only a computer, a member of a hate group can reach millions and millions of people. 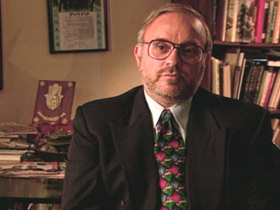 DUVALL: So the Internet is a vast library with no librarian, no help sorting the valuable from the junk.

DUVALL: What to do, then, until there is such guidance, especially for young people? How best to counteract the volume of hate? What’s the responsibility of Internet service providers?

Mr. GEORGE VRADENBURG (America Online): We’re very much, to a large extent, like a telephone system. We don’t monitor all the private communications that occur on our system.

Mr. FRIEDMAN: That’s why we say that — don’t wait for technology or these filters and screening devices. Don’t depend on government regulations. You as a parent, you as a school system, need to take the responsibility for protecting your kids.

DUVALL: Some Internet providers are taking responsibility. AOL monitors kids’ chat rooms and offers parents an option that blocks out offensive sites. AOL and other providers have, on occasion, dumped some hate sites after complaints from customers. But a hater can always find another service provider.

Mr. VRADENBURG: The notion that somehow we could monitor all that activity and only cause the right kind of speech to occur, I think is virtually impracticable.

DUVALL: There are no laws against Internet hate. If there were, they would collide with the First Amendment, the same constitutional right that protects all speech, including that of the small Phelps group in Kansas. 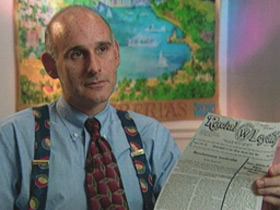 Mr. PHELPS: That would be a violation of the First Amendment if they said you can’t put your religious opinion out. I mean, nothing on here is illegal.

Mr. FRIEDMAN: This is an example of both what makes America great but also one of the cancers in our midst.

DUVALL: So the dilemma is how to protect people from hate without diminishing free speech. I’m Jed Duvall in Washington.

ABERNETHY: Joining us now from Montgomery, Alabama, is Mark Potok, the spokesman for Klanwatch, part of the Southern Poverty Law Center. Mark, do you agree with the statement we heard that there is not much the Internet providers can do to clean up the hate?

Mr. MARK POTOK (Klanwatch): Yes, I do agree with that. It is a huge task to monitor these sites, and the content of the pages change almost every day. There are hundreds of sites out there; they change servers very often. And although they get kicked off one server, they very quickly will move to another one.

ABERNETHY: So there’s no technological fix we can look to?

Mr. POTOK: I think not. I think that there will always be technology to avoid blocking programs, although several are being developed right now.

ABERNETHY: And what about the law? Is hate speech so dangerous it might be banned constitutionally? Can we look to a legal remedy?

Mr. POTOK: Well, so far the Supreme Court has refused to really limit speech at all on the ‘net. They liken it to print media rather than broadcast media, which can be controlled somewhat. It is conceivable in the future that the court will rule, when this question’s further examined, that it can be limited in certain ways like time, in much the same way that pornographic movies often are only allowed to be shown very late at night.

ABERNETHY: So it really comes down to us, like so much else, doesn’t it? What’s your advice, especially for parents? Forbid kids from going on the Internet? 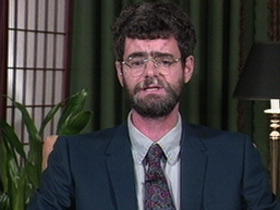 Mr. POTOK: Well, I think ultimately the answer is clearly education. That’s really the only answer here. It’s very much like boiling water. One has boiling water in the home because one needs it. However, you educate your children that boiling water is very dangerous and that they need to stay away from the stove. So whether or not you tell your kids don’t go on the Internet, or simply that these are sites put up by people with very bad motivations, that’s a personal decision. But clearly, you need to talk to your children about what’s out there.

ABERNETHY: And you yourself have a young son. One of these days you’re going to have to make that advice yourself, that call. What are you going to tell him?

ABERNETHY: Mark, many thanks.