MENACHEM DAUM, correspondent: For many Jews, Poland is inextricably associated with the Holocaust, and little else. So when I heard Poland was about to open up a museum telling the thousand-year history of Polish Jewish life, I decided it was time to take a fresh look.

To get a better idea of how Poland had changed since the war, I went along with Dasha, a Holocaust survivor who lives in New York.

For Dasha, the holiest site on our pilgrimage was her hometown of Bedzin, especially the site of her grandfather's grave. 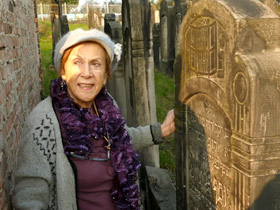 DAUM: Our difficulty finding her grandfather's grave was making Dasha increasingly nervous. When we finally found him, her relief was palpable.

PIOTR JAKOWENKO: We believe it is so important for the history of Bedzin, for our common history, we are not Jewish. 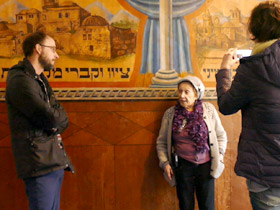 PIOTR: They built this town. They were building the houses. They actually built the city, the entire city. So we owe it to them. This whole Jewish history of Bedzin, of the region, was forgotten and this is what I couldn't agree with. After the war it was erased totally and it was like agreeing with Hitler, that is what he did, he wanted it. And after the war during the communism time, we continued this policy, and we decided it cannot go on like that.

DAUM: This idea, that Polish-Jewish history is an essential part of Poland's own history, was emphasized repeatedly at the opening of the Museum of the History of the Polish Jews. 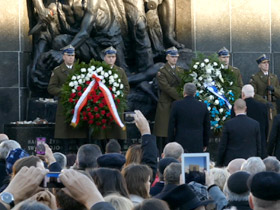 PRESIDENT BRONISLAW KOMOROWSKI (President of Poland): It is impossible to understand and fully appreciate Polish history without knowing the history of Polish Jews. Not only because of the many centuries Jews lived on Polish soil but also for the contributions of Jews to many aspects of Polish life; to the economy, culture and science.

RITTENBERG: The Polish speech was so wonderful, it was so recognizing us, recognizing me. I was part of all that contribution that Polish Jewry made to this country. I was very proud, yes I was. It was wonderful.

DR. BARBARA KIRSHENBLATT-GIMBLETT (Director of Museum's Core Exhibition): I see this museum as the face of the new Poland. This is not the post-communist period. This is the post-post communist period and it is really a different period. This is a period when 40% of the population is going to university, people are speaking English, they are cosmopolitan, they are educated, its a different generation. I think it really reflects a whole new era. 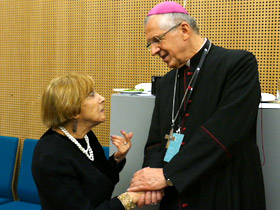 RITTENBERG: When I met the bishop and the priest, it was wonderful. The fact that I had a bishop putting his arms around me, me a Jewish child who was always afraid of churches, who was always afraid of Poles. I was. Who always, when I saw a few boys together, I was always afraid they may throw stones at me, I was told to go to the other side of the street, I grew up in fear, I did. I grew up in fear over my father because he had a beard and my brothers who had peyos and were Hasidim and we were always happy to see them back home that nothing happened to them, and here is this bishop, the symbol of the church putting his arms around me. It felt good, it really did,

And I am going away with a different feeling, seeing different changes, the changes are unbelievable, I am so respectful of it, I hope as old as I am that I will still make another trip. I don’t know. The perception has changed by both, by Poles and the Jews.

MENACHEM DAUM: Seeing Poland and the museum through a survivor’s eyes makes it clear that hatred doesn’t always have to be passed on from generation to generation. Perhaps no one is more qualified to set such an example than Poles and Jews.

For Religion & Ethics NewsWeekly, this is Menachem Daum.

After centuries of often violent anti-Semitism–since long before, during and after World War II–the government of Poland recently opened a new museum honoring the role of Jews in Polish history. That occasion prompted Dasha Rittenberg of New York, a Holocaust survivor, to go back to Poland to see if and how much it has changed. Filmmaker Menachem Daum follows Rittenberg’s journey to her grandfather’s grave site, the dedication ceremony for the new museum, and her meeting with a Polish Catholic bishop.