BOB ABERNETHY: For Jews around the world, sundown on Sunday begins Rosh Hashanah, the start of the Jewish year 5759 and the first of 10 days of awe, a solemn time of prayer, reflection, and repentance. We celebrate these High Holy Days here with a special interview with the renowned scholar and teacher David Hartman in Jerusalem. Our correspondent is Herbert Kaplow.

HERBERT KAPLOW: For many a first-time visitor, Jerusalem is indeed the City of Peace. That’s what its name means. But for many of the people who live there, Jerusalem is a city of tension, division, and bitterness. There’s friction among many of the religious communities, but the most visible are Jew against Arab and Jew against Jew. 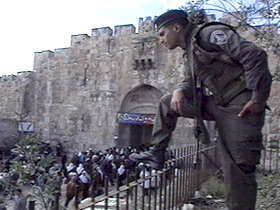 KAPLOW: For David Hartman, an Orthodox rabbi, the choice was clear. Jerusalem should be a model of inclusiveness and pluralism, and so he set out to help make it so. He created an educational and research center that would draw people of various beliefs and faiths. They would study together and come to understand each other better. It is called the Shalom Hartman Institute, named after the rabbi’s father, who came from a long line of Orthodox Jews living in Jerusalem’s old city.

Rabbi HARTMAN: Jerusalem is the place which in some way generates fanaticism and generates the feeling of exclusive truth. I mean, the history of Jerusalem is the history of holy wars. Each group came and therefore had to destroy what the other group did in order to affirm its own dignity. You’ll notice that the mosque is built on where they believe the temple is. You go into the old city, you get a feeling of geographic claustrophobia. Each one has to feel that my way is the only way. There’s one God, therefore, there has to be one truth. Christianity built their story on the Jewish story and therefore feel they are the inheritors of Judaism. Islam built their story on — on the Bible, and therefore also has to feel that they are the perfect expression of monotheism. Now we’ve got to get out of each other’s story. You see, we have to not feel that in order for me to tell my story, your story has to end.

KAPLOW: Do you think any progress is being made, for instance, between Islam and Judaism? 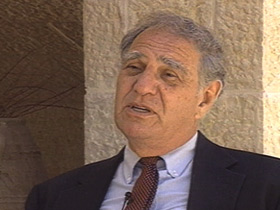 Rabbi HARTMAN: Not yet. But I think it has great potential for the future. We have a long tradition in which Jews and Islam have a sheer cultural frame of reference. I think we can renew that medieval synthesis. I mean, Miamonides thought that Al Farabi was one of the greatest, and it’s amazing to see how much Islam influenced him. Miamonides couldn’t have written what he wrote if he didn’t live within Islam. So that should be a testimony that you can be a very serious Halakah Jew, deeply committed to your tradition, yet learn from the world.

KAPLOW: A Halakah Jew is one who lives by the law.

Rabbi HARTMAN: The law in a very serious way.

KAPLOW: But you have in Jerusalem, and to some extent elsewhere, Jews rejecting Jews.

Rabbi HARTMAN: Jews are not immune from the sicknesses that have been involved in history for a long time. Notice again, you have Jews who claim that their way is the only way to live an authentic Jewish life. I would love to see a very vital Reform movement in Israel, a vital Conservative movement, and a vital Orthodox movement. Let there be diversity. Let there be many voices, and if you disagree with the other one, show that yours is more dignified, show that yours is richer, but do it through a civilized disagreement. 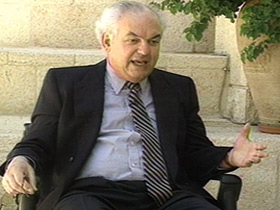 KAPLOW: Are you getting anywhere?

Rabbi HARTMAN: Well, I would say if you come to this institute, it still exists. We haven’t been blown up yet. In some way, maybe because they don’t understand the deeper dimensions of what I’m talking about, [extremists know] that I’m safe.

KAPLOW: Politics and religion are intertwined here. It’s the obvious statement of the year. How do you deal with that?

Rabbi HARTMAN: Well, I hope to neutralize as much as possible the control of the state on religious life. I call for the total separation of religion and the state. The state should not decide the Orthodox interpretation of Judaism is the only legitimate one. I don’t want a state church. Wherever there is a state church, religion dies.

KAPLOW: American Jewry, you know, is concerned about what’s happening here, the bitterness within the Jewish community. Can you say that their concerns are understood — understandable and legitimate?

Rabbi HARTMAN: Yeah, I think their concerns are legitimate and understandable, but I think their reaction is mistaken. In other words, by turning your back on Israel, is not helping Israel develop its own soul. My view is you should view it as your home, but a home that hasn’t yet been built. A home that’s still arguing. A home that can be nasty. You still visit your parents, even though your parents still call you schleps and call you names. In other words, even though they call you names, you should know that this is some of the weaknesses of the family. You have to put up [with them]. Do you love your [family] with all their weaknesses and blemishes? We have blemishes. We’re not just, you know, this beautiful story of hava nagila, with oranges, with six-day wars, with patches and with entebbes. We’re not just here. It’s not a summer camp. It’s not a summer camp which gives you pride and joy, it’s a living reality. The living reality is filled with disagreement, bitter disagreement. Each one fighting the other one, claiming, “This is my home”; the other one claiming, “This is my home.” That’s the family. And I think American Jews have to become mature and say, “We have a family disagreement with each other,” but don’t turn your back on them. Join the disagreement, let your voice be heard, let your voice have an important influence on the future of the society. 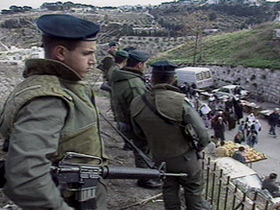 KAPLOW: And how should Jews perceive the rest of the world?

Rabbi HARTMAN: Israel is choosing to be dependent upon the world, and therefore we have to learn not to only tell horror stories, that the history of Jewish people is not just a history of persecution, and that young Jewish children growing up have to feel that they can live in the world, trust it, and yet be loyal to their own traditions. We don’t have to feed Jewish identity by anti-Semitism. We don’t have to feed Jewish identity through persecution. We have to feed it by love for what Moses dreamt about. I don’t want to go through life as a victim, as a sick, frightened victim, and tell horror stories to keep me alive as a Jew.

KAPLOW: It’s hard to measure how the ideas put forth by Rabbi Hartman are faring. Jerusalem, the City of Peace, continues to be the city of tension, division, and bitterness, but Hartman persists. For RELIGION & ETHICS NEWSWEEKLY, I’m Herbert Kaplow.