BOB ABERNETHY: On another question of great interest [to] the religious community, assisted suicide, the House is preparing to vote on a bill that could severely curb a doctor’s ability to prescribe lethal drugs for the purpose of suicide. That ability is at the heart of the Oregon law that went into effect last fall. Since then, 10 people have asked for and received medication allowing them to end their lives. Eight took the medication and died; the other two died of their illnesses. From Portland, Tom D’Antoni reports on a cancer patient who has prepared himself for that fatal decision. 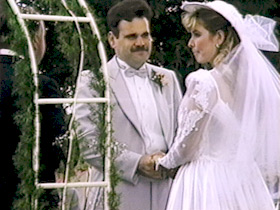 TOM D’ANTONI: This was Brian and Martha Lovell’s wedding day 11 years ago. An active man, not long after his daughter, Samantha, was born three years ago, he began building an addition to his house in suburban Portland. A year and a half ago, at age 35, he was diagnosed with colon cancer and was given six months to live. Now, he spends most of his time here or in bed and on massive doses of morphine, because the cancer has spread throughout his body. The unfinished work on his house symbolizes what has happened to his life. When he has the strength, he tries to spend as much time as he can with Samantha and his stepson, Matt, who is beginning his senior year in high school. Brian and Martha are ready to use Oregon’s Death with Dignity law.

Mr. BRIAN LOVELL: There will just be some point when we make a decision that my quality of life is no longer worth living, and it’s time to leave. 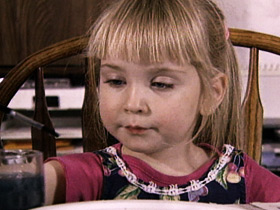 Ms. MARTHA LOVELL: I just don’t understand it, I never will, but that doesn’t mean that I’ve lost my faith in God either, because that’s what gets me through. I mean, our daughter, she was born two months early. She almost died, and we had a rough, rough time, but she made it through, and every day I look at her eyes and I know there has to be a God, because she’s our little miracle because she made it, and now this happens, and you know — but you still have to have your faith and you still have to believe that there’s a reason.

D’ANTONI: This is the Death with Dignity law. Four and a half pages, not really complicated as far as laws go. There’s a form here that Brian would have to fill out. “Request for medication to end my life in a humane and dignified manner. I understand the full import of this request, and I expect to die when I take the medication to be prescribed.” It says, “I make this request voluntarily and without reservation and I accept the full moral responsibility for my actions.” And then he signs it.

When he signs it, there is a two-week waiting period before the drugs are available. Most of the opposition to Oregon’s Death with Dignity law came from religious organizations, particularly the Catholic Church. Auxiliary Bishop Kenneth Steiner was in charge of the Archdiocese of Portland during the ballot measure campaign. 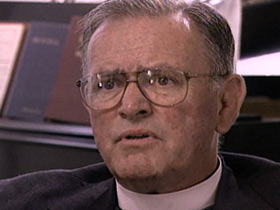 Most Reverend KENNETH STEINER (Auxiliary Bishop of Portland): We’re not free to take our own life, which is a gift from God. We’re stewards of our life.

D’ANTONI: Not all religious leaders oppose the law. Reverend Donald Miller is an outspoken advocate. He saw his father die an agonizing death and felt powerless to end the suffering.

Reverend DONALD MILLER (Retired Episcopal Minister): I don’t see any good purpose being served — for God, for humankind, for anything — by letting suffering, miserable people just go on and linger.

D’ANTONI: Is that not suicide?

Rev. MILLER: Yes, it’s suicide. Yes, it is. I can’t find a place in the scriptures that forbids suicide. 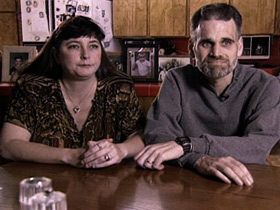 D’ANTONI: If you had to say one thing to the religious leaders who are against this law, what would it be?

Mr. LOVELL: What gives you the right to make up my mind for me? This is my, you know — this may be a decision that I want to make, and if I do make that decision, it won’t affect you in any way. So let me make my own decision. You have no right to take that away from me.

D’ANTONI: Brian still brushes Samantha’s hair every night. It is one of the ways he measures his quality of life. Brian Lovell knows his time is running out, and he is prepared to make the decision the Oregon law allows. For RELIGION & ETHICS NEWSWEEKLY, I’m Tom D’Antoni in Portland, Oregon.

ABERNETHY: Brian Lovell has now signed the request for medication form, and two doctors have signed it. This means the process that will allow him to end his life is under way.