This week, as the Senate searched for dignity, fairness, and bipartisanship in its trial of President Clinton, we wondered about the role of religion at the Capitol. One way religion can be influential is through pastoral counseling, and we’ve reported often here on the spiritual advisers to the president, but who counsels the Senate, now the president’s jury? And what influence can they have? Kim Lawton has our report. 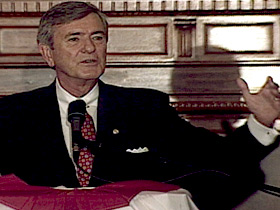 Senator STROM THURMOND (Republican, South Carolina): The Senate will come to order. The chaplain now will do the morning prayer.

KIM LAWTON: U.S. Senate Chaplain Lloyd Ogilvie opened the impeachment trial as he opens every session of the Senate: with a prayer.

Dr. LLOYD OGILVIE (Chaplain, U.S. Senate): Holy God, as this sacred chamber becomes a court and these senators become jurors, be omnipresent in the pressures of these impeachment proceedings.

LAWTON: Ogilvie is one of two official chaplains offering Congress spiritual guidance. He leads weekly Bible studies and prayer meetings for senators and Senate staff. He’s on call for personal spiritual counseling 24 hours a day. And he says he does get called upon. His counterpart in the House, Reverend James Ford, has a similar schedule. There are also numerous private groups that do spiritual work on Capitol Hill, many very low-key. There are Bible studies, lectures, and special prayer meetings, such as the bipartisan prayer breakfast that took place Wednesday, just hours before the 106th Congress opened for business.

Representative RICHARD GEPHARDT (Minority Leader): My prayer for this year is for the people’s House to take up the business of healing. 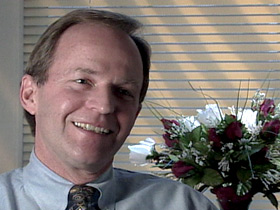 LAWTON: One private group working on the Hill is the Faith & Politics Institute, a bipartisan interfaith project that hosts weekly discussions, as well as congressional retreats and special events.

Reverend DOUGLAS TANNER (Executive Director, Faith & Politics Institute): The ongoing spiritual challenge, in the words of the prophet Micah, is to do justice, love kindness, and walk humbly with one’s God. And there seems to be an eagerness to do justice on some quarters and perhaps to love kindness on others. There doesn’t seem to be a lot of eagerness to walk humbly in the midst of this.

LAWTON: According to some observers, in a highly charged political atmosphere, even religious ministry can become complicated.

Mr. MICHAEL CROMARTIE (Senior Fellow, Ethics & Public Policy Center): The challenge actually in a partisan time is to try not to be partisan, because it’s the duty of the chaplain, the minister, or the spiritual counselor to keep bringing up issues that are transcendent of the highly volatile issues of the moment.

LAWTON: Michael Cromartie says ministers also need to be careful not to be manipulated by politicians.

Mr. CROMARTIE: What does happen in this town a lot is that people do get used, and people who are ministers or spiritual advisers are always being brought in to bless an agenda that’s already in motion. 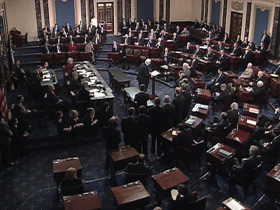 LAWTON: But even spiritual concepts can be laden with political implications. Ogilvie declined to speak with us about the spiritual climate in the Senate, saying anything he said right now would be interpreted politically.

LAWTON: With the potentially acrimonious and divisive trial now under way in the Senate, some ministers expect their most difficult spiritual work may still lie ahead.