SAUL GONZALEZ, correspondent: On Sundays, you’ll find Pastor Sam Livingston at his Baptist church in Hohenwald, Tennessee. He gives the sermon, helps to teach the morning religion class, and meets and greets members of his congregation. It’s all very typical work for a minister. But on the weekdays you’ll find Pastor Livingston at his other very different job as head of public utilities for his rural county. This morning the job involves supervising a crew repairing a broken sewer line.

PASTOR SAM LIVINGSTON: No, sir. No sir. It’s completely different. Church smells a lot better than this does!

GONZALEZ: With one job in the secular world and the other in the religious, Sam Livingston is what’s known as a bivocational pastor.

RAY GILDER: The term “bivocational” means that the pastor has a second job.

GONZALEZ: Ray Gilder is the bivocational specialist for the Tennessee Baptist Convention and he's written a book on the subject. He says more people than you think in the American workplace are also members of the clergy.

GONZALEZ: Gilder also says the idea of a pastor holding down more than one job has very old roots.

GILDER: You see, it’s a biblical model. Paul made tents and was a pretty good preacher. Jesus was a carpenter. Amos gathered sycamore fruit. You name it. There were a lot of people in the Bible who were of great use to God and had another job.

GONZALEZ: In Tennessee, nearly half of the state’s 3,000 Baptist churches are headed by a pastor who also has another job. For many ministers, working at more than one place is a choice, but that’s not true for everyone. Here in rural Tennessee, like in other parts of the country, pastors often take another job because they have to. Their churches and congregations are simply too small to support them. Working as a pastor in these communities may fill their souls, but it doesn’t necessarily fill their wallets. 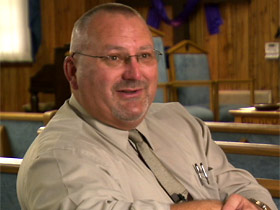 PASTOR SAM LIVINGSTON: Obviously, why I do the job in town, or why I do my regular job during the day is because I have to make ends meet and insurance and provide for my family.

GONZALEZ: You wouldn’t be able to put food on your own family’s table if all you did was being a pastor?

LIVINGSTON: Yes. Yes. It would certainly be hard for me to live right now on what I make here as the pastor.

GONZALEZ: Livingston has been a bivocational pastor for more than a decade, years during which he was also a cop on the beat and his community’s chief of police. He acknowledges it’s not easy juggling family responsibilities and two jobs, especially when one of those jobs comes with a congregation and all of its needs.

LIVINGSTON: The real challenge to me, and sometimes it's still... without God’s grace you wouldn’t be able to do it, is the fact of overwhelming responsibility of being the pastor. When people are in the hospital or get sick or have lost a loved one, or get in a car accident, the thing that is hard to me is that I just can’t be there. I work a job during the day. I don’t have the days to take off to go to those kinds of things. That’s what’s real hard, not having enough time to minister like you should. 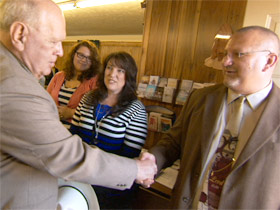 GILDER: They have to make what time they have useful. They can’t waste a lot of time. I tell people that bivocational pastors can be a lot of things, but they can’t be lazy. They have to be busy and know how to get the job done.

GONZALEZ: But bivocational pastors, and their churches, can also enjoy strengths. Often, members of the congregation will step in to do jobs the pastor just doesn’t have the time to do, from church office work to comforting fellow congregants who are sick or dying. Those extra duties, say bivocational pastors, can create more of a sense of shared church ownership. Many congregants, says Ray Gilder, also feel a pastor who punches a time clock someplace else can better relate to them and their working lives.

GILDER: The advantage is he has his ear to the ground. He knows what people are going through.

GONZALEZ: He knows what the working world is like?

GILDER: The working world and the stress and the pressure and being out there among bosses who often aren’t kind to you; the difficulty of getting your job done on time. So he knows more of what his people are feeling.

GONZALEZ: That’s what members of Sam Livingston’s church say about him. 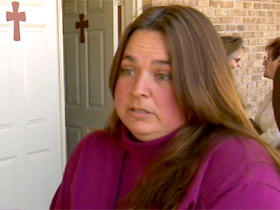 JODY BECKER (Member of Congregation): He has to go out and be part of the world, too, which is what we are called to do also, and not just hide behind the walls of our church.

GONZALEZ: Looking ahead, Ray Gilder predicts the number of bivocational pastors in the United States will only grow. Shrinking congregations in many churches and continuing uncertain economic times will make it inevitable, he says.

GILDER: Probably in America in the next twenty years or so, bivocational will be very common and accepted in all circles.

GONZALEZ: Another dimension of bivocationalism that’s increasingly in evidence are those who want to become pastors later in life without leaving their first job and the financial security it provides. John Newby owns one of the biggest recreational vehicle sales businesses in eastern Tennessee and is in training to become the pastor for the church that’s a stone’s throw away from where he sells his RVs. He plans on keeping both jobs when he becomes a full minister.

JOHN NEWBY: I am wide open in anything I do.

GONZALEZ: You are full of energy? You feel you can do both of these jobs well?

NEWBY: I have no problem with it. I know in who I believe.

GONZALEZ: Why not just do one or the other? 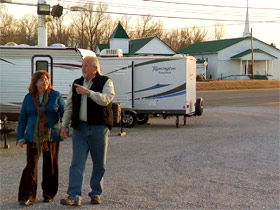 NEWBY: Well, I’ve thought about that. God comes first, but you still have to work and take care of obligations and responsibilities, but I really feel that the calling is what you have to answer first.

GONZALEZ: Echoing other spouses in the same position, when John’s wife, Mary, first heard about his decision to join the ministry while keeping his business—well, she wasn’t thrilled.

MARY NEWBY: I cried. I was completely unprepared. This was not in our plans.

GONZALEZ: Mary has since reconciled herself to John’s decision, but Ray Gilder says too many bivocational pastors don’t understand the toll their life can take on spouses.

GILDER: A lot of these bivocational pastors surrender late in life. Their wives had another lifestyle before she became a pastor’s wife. There is a strain on them about wondering "Do I measure up? Am I adequate? Am I dishonoring to my husband who's a pastor?"

GONZALEZ: Back in Hohenwald, Pastor Sam Livingston’s wife, Kim, knows all about the joys and burdens that come with being married to a bivocational pastor, from her husband being gone long hours to juggling her own work as a pastor’s wife and a job in the home mortgage industry.

KIM LIVINGSTON; Well, if I allow the spirit to be in control, then we work it out. But when my flesh takes over, then usually there’s some kind of spouting out and then apology later.

GONZALEZ: Sam Livingston says despite the pressures, he’ll remain a bivocational pastor for the foreseeable future, with one job providing him a living, the other a sense of higher purpose.

LIVINGSTON: My goal is to serve the Lord. If the Lord chooses to have me here until the time I retire or go to be with him, I’m fine with that.

Some ministers are answering the call to care for their families and tend to their flocks by working two full-time jobs. It’s a growing trend in Tennessee, with nearly half of the state’s Baptist churches being led by a pastor who also has another job. It is a tradition with biblical origins, says Ray Gilder, the bivocational specialist for the Tennessee Baptist Convention: “Paul made tents and was a pretty good preacher. Jesus was a carpenter. Amos gathered sycamore fruit. You name it. There were a lot of people in the Bible who were of great use to God and had another job.”