BOB ABERNETHY: Now our cover story on a method of treatment for terminally ill patients and their families that provides them with what one doctor you'll hear calls a good death. It's a companion to the hospice movement, a humane way of coping with the inevitability of the end of life. As death approaches, hospice care can impose a heavy burden, with great responsibilities on families. So now a growing number of doctors and hospitals are bringing the hospice approach to the hospital. It's called palliative care. From Boston, Lucky Severson reports.

LUCKY SEVERSON: Linda Archer is one of those people who could lift you out of a dark day into the sunshine, especially when she smiles. And she smiles a lot, despite the fact that she is in pain and suffering from inoperable lung cancer. She is 47 years old. 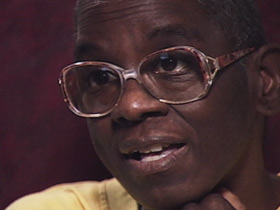 Ms. LINDA ARCHER (Patient): You know, when you first hear about it, you scream and you holler and you get mad. I mean, I got mad. I didn't cuss and swear, but I got mad at the doctors.

SEVERSON: It is one of the first stages of knowing you're going to die, getting angry. After she thought about it, Linda Archer knew she wanted to live, but she wasn't going to fight dying.

Ms. ARCHER: I had to ask God, "God, I'm afraid of death." I had to be honest with God. And he helped me. There were times when, you know, it comes back on me, that fear, but I -- I know that I can hold on, just hold on a little longer.

Dr. MARISSA SLAVEN (Medical Director, Palliative Care Center): And we think that, you know, we can really save people with chemotherapy, save people from dying. And I think, you know, you do save some people, but for the most part, you end up just prolonging their lives, which is a wonderful thing, but then they die. And the deaths were always very difficult for me.

SEVERSON: And that's why Dr. Marissa Slaven redirected her life and her profession to the philosophy that death doesn't have to be bad. She is now medical director of the Palliative Care Center here, a unit where patients come specifically to die. Trudy Colburn is part of the palliative care team at the medical center, which meets weekly to discuss what each patient wants and needs, a team that includes doctors, nurses, social workers, chaplains, medical students, nurse's aides, and volunteers. 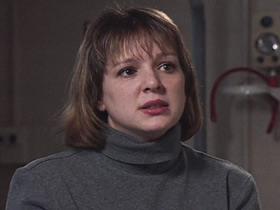 Dr. SLAVEN: Physicians often think that palliative care means just starting somebody on a morphine drip and letting them die, or even worse, killing them with it, when really that's not at all what we do. What -- what we try and do is control somebody's symptoms so that they can live as long as possible, as naturally as possible, with as little interference from the physician at that point in their life.

SEVERSON: A patient's quality of life, upholding their right to choose, managing pain are fundamental ethical issues in forming the best palliative care for each patient. Dr. Lachlan Forrow is director of ethics at the medical center. He says palliative care is the most exciting and humanizing development in medicine in decades. Part of his job is to convince other doctors of this.

Dr. LACHLAN FORROW (Director, Ethics Support Service): All of our efforts about death are just trying to push it off; then death is going to come always as a losing battle, and death's going to win, and everybody's experiencing it as a loss and terrible tragedy and a negative thing. And there are different ways of approaching death.

Dr. SLAVEN: I don't know how long she's going to go on like this; could be weeks, but it could be months.

SEVERSON: Only three years ago, 34-year-old Salma Lotter had everything: a loving family; she was a practicing surgeon and an accomplished athlete. Now she's dying from a brain tumor. But she knows her parents are there with her 24 hours a day. It's what she wanted, and that's very important. Palliative care encourages the family to be involved. The mission here -- and it is a mission -- is to find ways to make the patient as comfortable as possible, physically, spiritually, and emotionally. 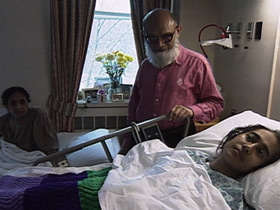 Dr. SLAVEN: Some of them have to do with getting financial and worldly affairs in order. A lot of it has to do with being able to say, "I love you, thank you, forgive you, good-bye." But if people can really get around all those things, that would be a good death.

SEVERSON: Loneliness can contribute to a bad death. Carmelita Miller outlived the rest of her family. At the end of her life, she found herself very much alone. No family at all? No brothers and sisters, no children?

Ms. CARMELITA MILLER (Patient): No. No. No family. Nothing whatsoever. Just me.

In all that time when you were feeling all that pain, you still never considered doctor-assisted suicide? 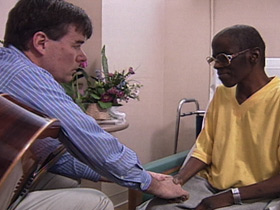 SEVERSON: Linda's love of God is the most important thing in her life, has been for a long time. Her faith is supported here. Even though she's dying, she's not praying for herself.

SEVERSON: It's for her friend, Tom Flynn, a volunteer of the unit.

Dr. FORROW: I think that 10 years ago in this country, most secular hospitals were very, very nervous about anything that sounded like religion. But for a lot of Americans, maybe most Americans, the spiritual, religious issues are actually more important than anything else, including whether I can technically give you some more days or weeks.

Mr. FLYNN and Ms. ARCHER (Singing in Unison): Don't let anyone blow it out.

Don't let anyone blow it out.

Dr. FORROW: And an increasing number of doctors are turning to palliative care. According to one recent study, patients who received palliative care lived just as long as those who chose more aggressive, often traumatic, and always more expensive treatments.

Ms. COLBURN: There's a sacredness to the end of life. Something special is really happening here with these patients. They teach us, they tell us exactly what life is about, and they finish doing their work here.

SEVERSON: Palliative care is not new to many cultures around the world, and it's been practiced by untold doctors and nurses and patients in this country long before it had a name. The great physician and humanitarian Albert Schweitzer termed it simply "a reverence for life."

Ms. ARCHER (Singing): The Bible tells me so.

SEVERSON: For RELIGION & ETHICS NEWSWEEKLY, this is Lucky Severson in Boston.

ABERNETHY: Three days after the taping of this story, Carmelita Miller died peacefully, according to her nurse, because she knew her affairs were all settled, with her possessions going to the close friends who were most important to her. Three weeks later, Linda Archer died, also peacefully. Salma Lotter got well enough to go home, but now she's again said to be failing. Her parents haven't decided yet when to readmit her to the hospital.

As death approaches, hospice care can impose a heavy burden, with great responsibilities on families. Palliative care is a method of treatment for terminally ill patients and their families that provides them with hospice-like care in a hospital.