BOB ABERNETHY: In the aftermath of the Columbine High shootings, the entertainment industry has been wrestling with whether the violence it presents on the screen encourages violence in real life, and if so, what to do about it. We have a profile today of the legendary Roman Catholic show business priest who thinks Hollywood does bear some responsibility for society’s violence and should face up to it and fix it. He is also the creator of the Humanitas awards.

When Father Ellwood Kieser finishes saying Mass each morning, he takes off his collar and goes to work as a movie maker and persuader. Six feet six inches tall, with a doctorate in theology, his calling, he says, is nothing less than to persuade America’s entertainment industry to celebrate human values as well as money.

Father ELLWOOD KIESER (Producer): You know, they’re a human being; I’m a human being. I’m trying to do my job; they’re trying to do their job. But I don’t think they should put their stockholders always before their viewers. And so I ask them to balance the two. And I think at the deepest level, they know I’m right. 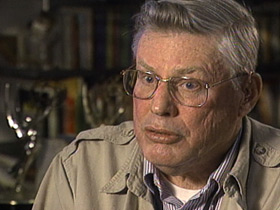 ABERNETHY: If anyone could change Hollywood, Father Kieser would be that man. He has begged, cajoled, produced, organized, and prayed for improvement for 40 years. Kieser’s order, the Paulists, specialize in ministry to the unchurched, and that’s what got him into show business, first as a religion teacher, then as the producer of a television dramatic series. He became legendary as a ferocious but benevolent arm twister who could convince Hollywood’s top talent to work for him for minimum pay.

Mr. TOM FONTANA (Screenwriter): He wears you down, he beats you down, he pleads, he prays. Every time he says to me, “I’m going to say a prayer tonight,” I know I’m doomed. I know I’m doomed. I — it’s like, “Okay, fine, I’ll do it. I’ll — whatever you want, I’ll do it,” because once he starts praying, it’s over for me. I have no — I have no defense, because what — are you going to — you know, I can’t pray back, counterpray, you know, “Dear God, please get Father Kieser off my back.” 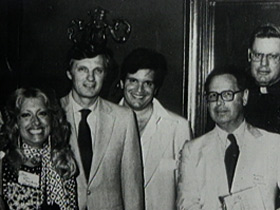 ABERNETHY: Throughout his show business career, Father Kieser has tried to encourage others, not condemn them. But these days, especially since the shootings at Columbine High School, he’s increasingly critical of movie violence.

Father KIESER: It’s dehumanizing. It’s distorting. It makes — it tells lies to these people. And so it diminishes their humanity and it leads them into a dead end.

ABERNETHY: Kieser and many others say the single most important reason Hollywood’s studio executives make violent movies is that they sell, especially to the biggest part of the audience, teenagers and 20-somethings. Lee Margulies covers entertainment for the LOS ANGELES TIMES.

Mr. LEE MARGULIES (LOS ANGELES TIMES): The bottom line is they can make lots of money by doing exactly what they’re doing. And they don’t feel a great need to do something different.

Mr. CHARLES CHAMPLIN (Critic): It all comes down to dollars. There’s no question about it. Your margin for error on films that cost $90 million is terrible. You’ve got to be ruthless in your anticipation of what the audience will like.

Father KIESER: So that the ultimate responsibility is with the people buying those tickets and with the parents of the kids who are given the money to buy those tickets. We’ve got to support good stuff and ignore or boycott bad stuff.

ABERNETHY: Every morning, Father Kieser meditates for an hour. He sees his spiritual life as the foundation for his work, which he says is to help audiences experience God’s presence in themselves and in others. One way Father Kieser keeps himself going is by swimming in the ocean near his office, and one day, 25 years ago, that’s where he thought up the idea of the Humanitas Prizes, generous cash awards each year for movie and TV writers whose scripts best explore the deepest human values.

Father KIESER: The actual idea itself came 200 yards offshore. I was swimming upcoast, and (makes exhaling noise) it came. I didn’t finish the swim. I ran right in, called a couple of my friends to see if they thought it was as good an idea as I did, and went from there. 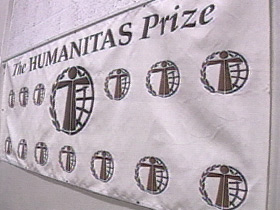 ABERNETHY: At well-attended Humanitas workshops, veteran writers explore how to combine entertainment and values. At annual luncheons over the past 25 years, the total prize money given out has been $1.8 million, all raised by Father Kieser. The Humanitas theory is that better scripts will become better pictures. And critic Martha Bayles says this can happen.

Ms. MARTHA BAYLES (Critic): Sometimes people who do things good will go off in a different direction and surprise everybody with their success. So it’s not as predictable as the critics and the pundits would have you believe.

ABERNETHY: At this year’s Humanitas Prize ceremony, Kieser’s theme was violence. He challenged writers to show in their scripts that perpetrators of violence are sick, that violence has terrible consequences, and that there are alternatives to violence.

ABERNETHY: Father Kieser’s friends acknowledge that he may not have revolutionized Hollywood, but they say he and the Humanitas awards have been encouraging. 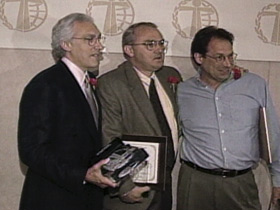 Mr. CHAMPLIN: I’m very glad that they exist, I must tell you, because I think that it will be even a drier season without them.

Mr. FONTANA: He’s constantly there to remind you that you should be doing better work than you probably want to do.

Bearing the witness is precisely what Bud Kieser, as he’s known, continues to do. At age 70, right now this priest producer has in development a documentary, a miniseries, a movie of the week, a daily TV magazine show — seven major TV and movie projects in all.