BOB ABERNETHY: Ever since the Immigration Act of 1965 opened up this country to more and more non-Europeans, the U.S. has become a place of ever-greater religious diversity. Alongside Christians and Jews in all their variety, there are now Muslims and Buddhists and Sikhs and Hindus, a million Hindus in all, struggling, as have all other newcomers, to establish their faith and traditions in this country. Here’s part one of a two-part series on Hinduism in America. Our reporter is Monika Samtani.

MONIKA SAMTANI: Hirdaynath Harnal is an engineer from south India. He and his wife Rajrani arrived with their children in northern Virginia 21 years ago, like all immigrants, looking for a better life. Also like most immigrants, the Harnals struggled to build a home for their faith. 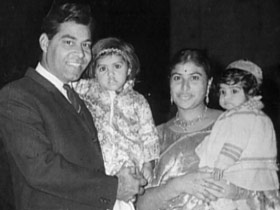 Mr. HIRDAYNATH HARNAL: Well, back in 1978, when I came to the United States, I couldn’t find any place of worship for Hindus.

SAMTANI: In India, Hindus of difference class or caste may not have associated with one another. But here in America, they reached out to each other to build communities and temples.

Mrs. RAJRANI HARNAL: We used to go for practice, for chanting and all, home to home, or community centers and all. But now at least we have one place that — where we can sit together and pray and chant.

Professor DIANA ECK (Comparative Religions & Indian Studies): Has the Hindu tradition come and put down roots here? Absolutely. In one big city after another, there are temple consecrations, temple dedications, virtually every month in the United States, over 200 in the last decade or two. 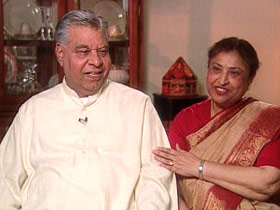 Mr. HARNAL: I saw kids, those who were just born here and now they’re over 20 years old. And when we see them in temple now, they feel very happy that what we were doing, though, is giving root, and it will prosper.

SAMTANI: Many of the Hindu religious traditions seem different to most Americans.

Ms. MONU HARNAL: A lot of people think Hinduism is so mystical. You know, they think it’s snake charmers and palm readers and people who can walk on fire and yogis just meditating. That’s not Hinduism.

SAMTANI: Hindus believe in reincarnation. Their goal is to reach moksha, better known as nirvana, the release of the soul into the universe. This process depends on karma, or the consequences of one’s actions. In Hinduism, there are numerous paths to one god, but God is infinitely complex and seen in many roles.

Mrs. HARNAL: God is one entity, but, like, he’s one; he’s father, but he’s a husband now, so God changed his forms when he changes his duties.

SAMTANI: Hindus appeal to whichever form of God they need, like Brahma, Vishnu, or Shiva, the images of the Hindu Trinity, or form of Davi, the female incarnation. In all, there are many hundreds of deities. Hindus also believe there is more than one way to worship God. Unlike most western religions, there are no commandments. Devotees are free to practice their faith as they wish, through ancient rituals, meditating, practicing yoga, or doing good deeds. Sonia, the Harnals’ oldest daughter, feels it is important to teach her children the traditional rituals, such as tikhas, signs of devotion to God that are often applied during prayers. 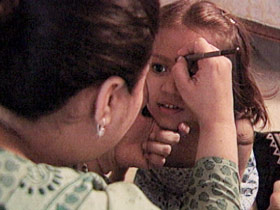 Ms. SONIA HARNAL: What do they put on your head, child?

Ms. S. HARNAL: It’s a tikha? Oh, maybe like a dot, and then the little petals. What color do they put the tikha?

Ms. S. HARNAL: Why is it white and red for when? 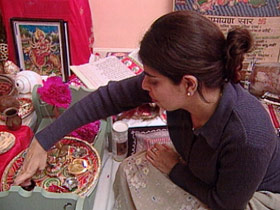 SAMTANI: Puja is a ceremony of prayers most frequently said at home, but also at the temple. The prayers welcome God and are the most important ritual of Hinduism.

Ms. M. HARNAL: I would sit at the altar, light a candle, light incense, bring some flowers, and pray that the whole day goes well.

SAMTANI: Hindus believe life is based on dharma, or religious laws and duty. Traditionally, dharma has four stages: being a student, raising a family, serving the community, and entering monastic life, all done in order for the soul to reach its purest form, nirvana. But even this fundamental belief, the very essence of Hinduism, is undergoing change, adapting to American culture and society.

Ms. M. HARNAL: I think what’s more important to me is not following the four stages, the dharma. It’s right now really following what’s in my head, my dreams, my goals.

SAMTANI: Practicing their religion in this country, where it often seems so foreign to others, has been difficult for the Harnals’ children, who were born in India but raised here. 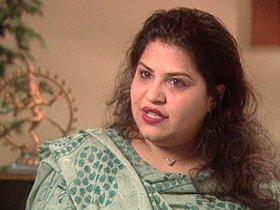 Ms. S. HARNAL: Going in front of an idol and bowing my head, that was very difficult for me when I was younger. So what I did was, as I got older, I started looking at that, and I thought, “Okay, why have they done this? Why have they done this?” An idol is just a point of focus. So if I focus on one point, I focus on that idol for long enough, I will start relaxing, and I will start, you know, praying and you get into the — you know, the spiritual side of yourself because you’re concentrating.

SAMTANI: In India, Monu may have taken Hinduism for granted, but here, she has examined and adjusted her faith.

SAMTANI: For Monu, this means doing rituals like puja and going to the temple regularly, but feeling free to find new ways to seek nirvana.

Prof. ECK: Coming to a — you know, a sense of what really one wants to keep and what one is willing to let go is something that will need to be negotiated by both the first and second generation.

SAMTANI: For the Harnals of northern Virginia, as for all America’s million Hindus, the continuing struggle is how and how much to adapt the faith of the Ganges to life here in America. I’m Monika Samtani for RELIGION & ETHICS NEWSWEEKLY.