BOB ABERNETHY: Fifty years after the Communists came to power in China, they seem insecure. An apparently nonpolitical sect, Falun Gong, that emphasizes meditation and exercises has attracted so many followers, the government sees it as a threat. Last week, Chinese officials banned the group altogether and began arrests of Falun Gong followers. This week, the crackdown intensified and the Chinese government sought the arrest of the movement’s founder, who lives in New York. Kim Lawton has more. 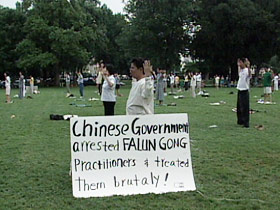 KIM LAWTON: In Washington and in cities across the U.S., followers of the Falun Gong meditation movement are turning out to express solidarity with besieged practitioners in China. Thousands have been detained since China’s Communist government began last week’s crackdown. This week, Falun Gong literature was confiscated and very publicly destroyed.

Mr. MIKE JENDRZEJCZYK (Human Rights Watch/Asia): They’ve clearly decided that this kind of activity outside the control of the state poses a potential threat to the government and to the Communist Party, even though the organization itself says it has no political agenda.

LAWTON: Falun Gong, also known as Falun Dafa, claims to have 100 million followers around the world, including several thousand in the U.S., but numbers are impossible to verify. The movement was founded in China in 1992 by Li Hongzhi, who spreads his teachings through the Internet, books, and videotapes. 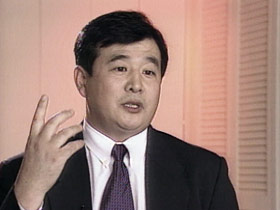 LAWTON: The 48-year-old Li now lives in New York City. He says Falun Gong is not an organized religion, but a cultivation system of mind, body, and spiritual development.

Mr. LI HONGZHI (Falun Gong) (Through Translator): In order to have a healthy body, one must cultivate a good moral character, and only by doing that can one really make improvements.

UNIDENTIFIED WOMAN #1: You not only practice your physical body. At the meantime, you practice — you cultivate your heart, mind, and spirit.

UNIDENTIFIED WOMAN #2: I feel like all the earthly things kind of fade away. I’m so in harmony with the universe. 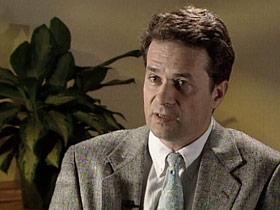 Human rights experts say the campaign is similar to crackdowns against other groups, particularly religious groups, that are able to marshal allegiances to something other than the Communist system.

Mr. JENDRZEJCZYK: China’s very nervous [about] the growing attraction of religious activity, especially to young people — for those who don’t feel that Marxist ideology gives them what they want in terms of a moral or spiritual center — are being attracted to activities that are carried out outside the control of the state.

LAWTON: Falun Gong followers insist they have no political aspirations. They say they merely want to practice their beliefs without government interference. I’m Kim Lawton in Washington.

ABERNETHY: On the Falun Gong video, you may have noticed a swastika. Falun Gong followers say it’s an ancient Asian religious symbol, not the one made infamous by the Nazis.