KIM LAWTON: They loom off the world’s great cathedrals, mystical, sometimes menacing, always mysterious. In the 12th century, St. Bernard of Clarevoe wrote, “What is that ridiculous monstrosity doing? An amazing kind of deformed beauty, and yet a beautiful deformity. What are the filthy apes doing there, the creatures, part man and part beast?” Today, the same questions could be asked. What are gargoyles doing, not just on cathedrals, but in front yards, gift shops, publishing houses, and all over the Internet?

Ms. PHYLLIS TICKLE (Publishers Weekly): They’re everywhere. They’re ubiquitous. So I think we can say that they’re perhaps as popular a religious object right now as we’ve got in the general culture, that is, in the nondevout culture.

LAWTON: The English word “gargoyle” comes from the French “gargouille,” meaning throat or pipe. The name hints at the very functional reason for the gargoyle and for his brother, the grotesque, which are often confused for each other. 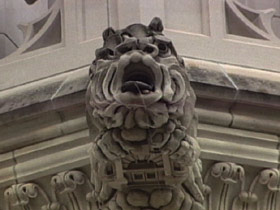 LAWTON: Such a drainage system helps protects cathedrals from water stains and erosion. But over the centuries other, more mystical traditions also developed. Many considered gargoyles the spiritual protectors of churches as well, scaring off demons and evil spirits. Some historians believe gargoyles were inspired from pagan eras and were used to make churches feel more familiar to new Christians. Others said gargoyles were morality lessons in stone, reminding people that while purity and good may be found inside the church, sin and evil are never far away.

Vince Palumbo is a fifth-generation stone carver, one of a vanishing breed of artists. He’s worked at Washington’s National Cathedral for nearly 40 years …

Mr. PALUMBO: If you bend down here, you’ll see another one.

LAWTON: … carving saints and gargoyles. Columbo says in more modern times, there’ve been some changes in the tradition of gargoyles.

Mr. PALUMBO: In the older days, a gargoyle was as ugly as possible, you know, because it’s supposed to scare the devil away from the house of the Lord, you know. 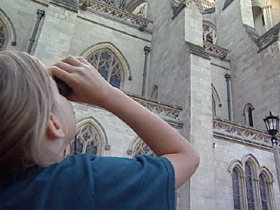 Mr. PALUMBO: I mean, contemporarily artistically speaking, they look good, but they’re not the gargoyle that to — I mean, who’s going to — the rabbit, who wants to scare — you know, who gets scared from the rabbit? You see what I mean?

LAWTON: American pop culture is rediscovering gargoyles, both their whimsical and their menacing sides. There are several new books out about gargoyles, from children’s books to architectural studies to gift books. There are dozens of Web sites about gargoyles, from the scholarly to the offbeat. And gargoyles are rivaling angels as a hot collectible. This store in Boston specializes in the sale of gargoyles and grotesques. Shop co-owner Louis Gordon says his customers are fascinated by gargoyles’ relationship to the divine.

Mr. LOUIS GORDON (Gargoyles, Grotesques & Chimeras Shop): So much religion is only emphasizing the good or the beautiful, where some people are attracted to the more profane or the scary. The gargoyles bring you in and all of a sudden you become introduced to the sacred side of yourself. And the gargoyles are sort of the guardians to that entrance.

LAWTON: Culture critic Phyllis Tickle believes the interest in gargoyles is not only fun but also reflects some important trends in contemporary spirituality.

Ms. TICKLE: Much of the spiritual hunger that’s going on in this country right now has a kind of medieval flavor to it.

LAWTON: Gargoyles, she says, symbolize an acknowledgment that evil does exist. And she believes for many modern people, gargoyles fulfill a deep interest in the spiritual unknown in a world that’s not easily understood or explained.