FRED DE SAM LAZARO, correspondent: It's known as the baby factory. But unlike most factories, the people who run Manila’s biggest public hospital wish this one were less productive. The staff here at the maternity ward say this is a fairly typical, if not slightly quieter than usual day. Still, there are 165 new mothers squeezed into 127 beds.

About 70 babies are delivered every day. Their mothers are treated at no charge. They couldn't afford much anyway, with household incomes of five dollars a day, often less. Most, like Irene Ocampo, who's 19, will tell you their pregnancy was unplanned.

IRENE OCAMPO: I didn't know anything about family planning before becoming pregnant. That's why I had my baby. I would have preferred to start having children at 20-plus, maybe 25.

DE SAM LAZARO: The hospital recently added a new service to help women control when or whether to have more children. 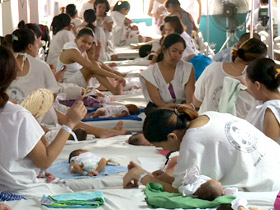 OCAMPO: I want to have three to five years between them. The family planning staff told me to get fitted with an IUD. I prefer the implant. It lasts for three years.

DE SAM LAZARO: For about a year, the Philippines has begun implementing a law that requires public health facilities to offer free contraceptive services. The measure has long been opposed by the Catholic Church, a powerful institution in the Philippines.

REV. JOEL JASON (Archdiocese of Manila): Nowhere in the law does it say that sex is best practiced in the context of marriage. It only says that people have a right to a satisfying sex life. Therefore we will see more and more people having sex who are not even committed to each other.

DR. SYLIA DE LA PAZ: We want all pregnancies should be wanted and should end in a healthy baby and mother.

DE SAM LAZARO: De la Paz has worked these wards for two decades. In that time, she says, most patients have seen their living conditions go from poor to poorer. 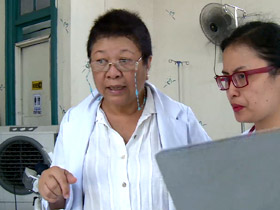 DR. DE LA PAZ: Before, there used to be street children. Now you see street families. They sleep in the streets, they have no homes.

DE SAM LAZARO: Most disturbing, she says, has been a spike in teen pregnancies: up 50 percent in the country in the last decade, more than double in this hospital.

DE SAM LAZARO: She says this precocious sexual activity hits hardest in poor neighborhoods, where there’s little access to information and the means to prevent pregnancy.

ANGEL (age 16): No, I had no idea that young people like me could have family planning. I did not receive any sex education in school.

DE SAM LAZARO: Angel came to this neighborhood clinic run by a nonprofit group to be fitted with a contraceptive implant. However, like most teens here she only learned of this service after becoming pregnant. She was 14. 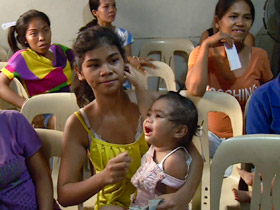 ANGEL: I wanted to finish my studies to become a teacher. Becoming pregnant broke my dreams.

DE SAM LAZARO: Some proponents of the new reproductive health law say an entire nation’s dream has been broken by its failure to control population growth. The Philippines has much higher poverty than similar-size neighbors. Like Thailand, with half the birth rate and twice the GDP of the Philippines. 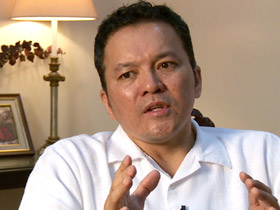 DE SAM LAZARO: The Church has long been a big influence in this predominantly Catholic nation, its moral teachings imprinted in both liturgy and law.

The Philippine constitution, updated in 1987, says that the state shall equally protect the mother and the unborn from conception, and that’s the basis of opposition to the reproductive health law. Opponents argue that just about all methods of artificial contraception can lead to abortion.

MARIA CONCEPCION NOCHE (Attorney): The objective was to ensure that our Philippine Supreme Court is not going to come up with a decision like the Roe versus Wade of the United States. 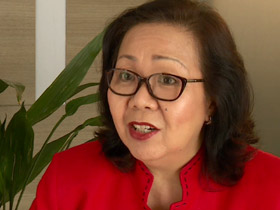 The Court upheld most of the law, directing the country’s food and drug administration to approve contraceptives that don’t cause abortion. Noche plans to go back to Court, arguing the agency’s choices: pills, IUDs, injectables, or implants can lead to abortion, because in some cases they prevent an embryo—legally a person—from attaching to the womb.

NOCHE: They have these secondary mechanisms of action, of making the uterus unsuitable or hostile for implantation of the fertilized ovum.

DE SAM LAZARO: Father Jason draws a distinction between contraception and family planning, a principle with which the Church has no problem, he says.

REV. JASON: What the Church consistently has taught is that in your desire to regulate the number of children, choose that option that will promote your physical health, the health of your marriage, the health of your spirituality, even the health of society, and all of these are taken care of in natural family planning.

DE SAM LAZARO: The Church has long preached natural family planning, where couples monitor the woman’s menstrual cycle and must abstain from sex on days when she is fertile. Father Jason says artificial methods are a symbol of a moral decay that underlies the new law. 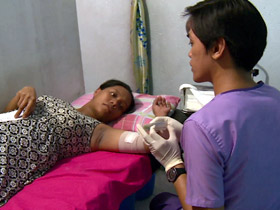 DE SAM LAZARO: Back in the maternity ward, Blessy Padua, a laundry assistant who did not complete high school, says she and her husband did try what she calls the calendar method—without success.

BLESSY PADUA: I am Catholic, and I am aware the Church does not approve of family planning, that God said go and multiply. But at the same time I already have a lot of kids. I had to stop getting pregnant.

DE SAM LAZARO: After delivering her seventh child, the 34-year-old Padua opted to be sterilized.

Dr. de la Paz says for many women here, especially those younger and unmarried, natural family planning is not a good choice or a choice at all.

DR. DE LA PAZ: A lot of them have challenges with their partners, who have issues with alcoholism, no job, inadequate income, so...

DE SAM LAZARO: How many of them are married, would you guess?

DE SAM LAZARO: One year into its implementation, the services mandated by the reproductive health law have reached urban public health centers. But about a third of all Philippine women—most in rural areas—still lack access to contraceptive services.

For Religion & Ethics NewsWeekly, this is Fred de Sam Lazaro in Manila.

A law enacted last year in the predominantly Catholic Philippines requires public health facilities to offer free contraception to the poor. The Catholic Church strongly opposed the law. But supporters say the law is necessary to curb the country’s soaring population growth—the principal cause, many believe, of its high poverty rate.