BOB ABERNETHY, host: We want to take the measure now of Pope Francis' trip to the US last week. Our managing editor Kim Lawton is here, and so are Pat Zapor, a reporter for Catholic News Service, and John Carr, director of Georgetown University's Initiative on Catholic Social Thought and Public Life. Welcome to you all. John, the pope's visit was just going along so beautifully, and then came this news that he had had a meeting with Kim Davis. Why did he do that?

JOHN CARR: I think the pope may be asking that question. The pope is infallible, but he doesn't know everyone he meets with. And it's clear someone invited Kim Davis to the nunciature, and there was a brief encounter which she and her handlers tried to blow up into something it wasn't, and now the Vatican's made quite clear that that encounter was not an affirmation of her views or her actions. One lesson to all this would be that, be careful about trying to use the pope for your own ideological or political agenda, because you could come to regret it.

KIM LAWTON: Well, but everybody's doing that still, though, and that's one of the things I see moving away from this trip, I'm still getting news releases from people saying, "Oh, let's follow the pope's agenda on climate change by doing this, and let's follow the pope's agenda and pass my bill on that." And so there is a lot of that still going on beyond this particular incident.

JOHN CARR: Part of the power of the visit was that the pope doesn't fit our categories. Right, left, Democrat, or Republican. He offered a moral framework, not a legislative agenda. And so people can try to use it, but the more political they try and make the pope, the less impact he might have. So I think we all ought to take a step back, listen to what he actually said, and, frankly, follow his advice and example. 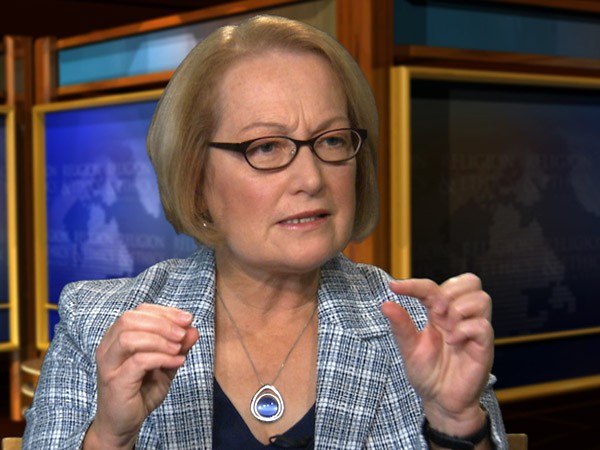 ABERNETHY: Pat, what did you hear people saying about this meeting?

PAT ZAPOR: The Kim Davis meeting? Well, it was interesting that our Facebook feed was very lively yesterday as people were very outraged, and it was interesting that the people who were not particularly Catholic often were the ones who were the most like, "Well, it's done, I'm done with that guy now. He hasn't responded to this. He hasn't explained himself. How could he let himself get put into that situation?” And even when various writers who know the Vatican better, who know the pope's situation better, would point things out like the pope meets hundreds of people. he doesn't know the whole stories of any of them, people were ready to be outraged. I think in some ways it says a little about the fickleness of American society. The pope was for some people the latest big thing, which is sad, because they seemed to be engaging with what he was saying on various topics. That was why people were paying attention to him. And so I find it kind of disappointing, that the leap to judgment, that "Well, he met with Kim Davis, and therefore this is what he believes" was so shallow.

CARR: It sort of brought out the worst of us, which is really a shame, because he addressed religious freedom in powerful ways but very careful ways and actually asked us to step back from sort of the culture wars and to think about how does a country with our heritage, with our values, learn to live together with respect for a wide variety of views. And my hope, we will get back to the pope's message instead of how the people are trying to use his message.

ZAPOR: So much of what he said to Congress, for instance, was about let's stop judging, and let's stop being partisan and dividing but reach out with love and compassion to people. And that was paragraph after paragraph of his text to Congress. And yet in the press room, the reporters were looking for the one sentence that might have been about LGBT issues or about abortion and, "Does this sentence mean this or this or this?" People were looking for the divisiveness instead of paying attention to the meat, like you were saying. He wanted people to reach out to each other in love and compassion, and that was what he said over and over again in so many ways, but we're instinctively focused on the divisiveness.

LAWTON: Well, and also, I think that so many people want the pope to basically put his blessing on their particular position, and we saw that a lot when he was here, and I'm seeing it still afterward. They want the pope to bless their position rather than thinking or listening about what did the pope have to say about things that I don't agree with, or how might I apply what he said to issues that I find difficult? 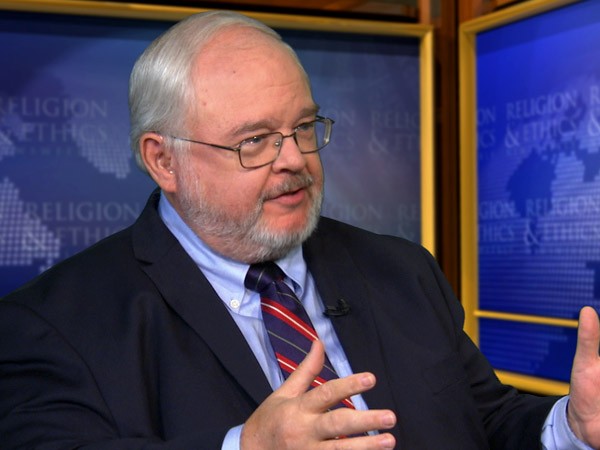 CARR: When I grew up, the question was "Do you agree with the pope?" instead of "Does the pope agree with you?" I think it was just stunning. I had the privilege of being in the chamber. And it was almost surreal—

ABERNETHY: At the Capitol?

CARR: Amazing. Here was this white solitary figure in front of two Catholic kids from Ohio and Pennsylvania who were old enough to remember when John Kennedy was told he shouldn't be president because he would take advice from the pope. And now the only thing the Congress seems to agree on is they need the advice from the pope. And then he went from the Capitol, the most powerful people in town, to have lunch, to be with the least powerful people in town. So frankly, I think part of his message, in some ways the most important part of his message, was not what he said but what he did.

ABERNETHY: Let me pick up on that, because I think this nonverbal part of the thing, about how some people say, "He touched my soul!" Pat, what have you heard about that?

ZAPOR: That was, I think, why you saw so many non-Catholics or lapsed Catholics or marginal Catholics who made a point of going to the Mall and to the mass in Philadelphia, of going to Central Park just to get a glimpse of the pope, because people feel he is important to them in ways that no religious leader, certainly not a pope probably, has been maybe ever. My neighbors and friends who are secular and some anti-religious were paying close attention and in positive ways. They weren't looking for missteps or the problems, but they really wanted to hear what he had to say. Then they came back with it. They discussed it. They said, "I loved what he said about reaching out to the homeless. I thought it was so fascinating that he would go and serve lunch, that he spent that time in the prison."

CARR: I was really struck how his impact was personal. I've been doing this a long time. This religious leader has touched me in ways I haven't been before. Members of my family going back to church. People on television saying they're recovering their faith. I was on Capitol Hill two days after the visit. We met with five senators, with the minority leader, with Speaker Boehner's office. There was a different tone, an effort to try and hear the message and maybe even try to work together on some things. And if we could find leaders who would step away from the partisan and ideological battles and work together to lift up the poor, maybe that would be Pope Francis's first miracle. I mean, we would not have seen those senators without Pope Francis. One of them talked about weeping on the floor of the Senate. I think he touched lots of people. [The Archdiocese of] Washington had this pledge where you were asked to pray, to act, and to serve those in need. A hundred thousand people took that pledge. The pope is gone but the pledge remains, and I think we're different because he was here. 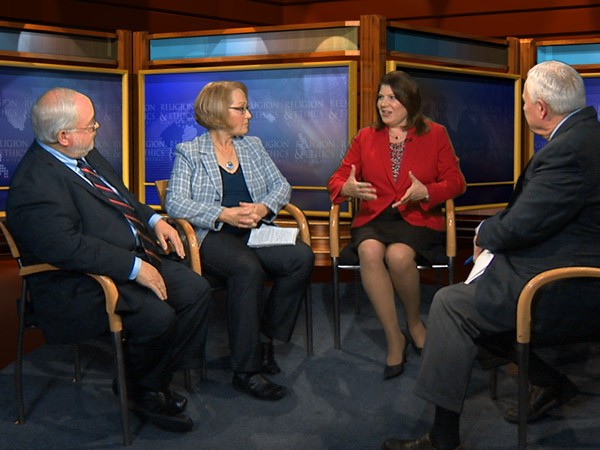 ABERNETHY: Do you think it will last?

ZAPOR: I can give you one anecdote. A friend who has a very Catholic family, raising their kids in Catholic schools, good church-going people, very involved in their parish, they went to the mass in Philadelphia. And they came away discussing on the way back, the husband and wife, discussing, "You know, we really don't do enough for poor people. We're not personally involved enough. We write checks but we need to be giving our kids a better example of exactly what the pope was saying and doing." That was one very conscious thing that they came away from, and that was from a family that already was pretty mainstream, pretty involved family. And I could see that that will develop in other ways. You saw it in Congress. That's fascinating and amazing. But I think the long-term effects—everybody's not going to come away a fan of the pope forever and doing everything he has suggested, but like my friends' experience, and like you saw in Congress, it will have long-term [effects], I think.

LAWTON: And it will be interesting also to see the impact on the Church, not just in the US but around the world, and any connections between what he said and did on this visit and how the Church moves forward. And certainly we have starting in Rome a meeting on family issues which are some very controversial issues, very difficult issues that are before everybody, but certainly the Church is looking at. So it will be interesting to see whether, when the pope told bishops and politicians alike to not be polarized and use divisive language, we'll see how that plays at the meeting in Rome the next couple of weeks.

ZAPOR: He's certainly telegraphed that that is the approach he wants to take in the synod. He's tried to get some of the issues of the synod out in front, the discussion about annulments, telling dioceses to make annulments simpler. That was something that stood to be a thorn in the synod, something to be a controversial issue, and he got it out of the way ahead of time, so he's certainly paved the way for people to be less divisive and less bickering.

ABERNETHY: Many thanks to all of you. Our time is up. Kim Lawton, Pat Zapor, and John Carr. Many thanks.

ZAPOR AND CARR: Thank you.

The pope has returned to Rome after his historic trip to the United States, but the message and meaning of his words and actions are still being debated. We are joined by John Carr, director of Georgetown University’s Initiative on Catholic Social Thought, and Pat Zapor, who covered the pope’s trip for Catholic News Service, about how the pope was received, what he said and did, and what the impact of his message may be on the Catholic Church and beyond.

Pope Francis in the U.S.