*CORRECTION: Several viewers pointed out that in this story we said Catholics “worship” Mary. The word should have been “venerate,” and we thank you for reminding us of that.

BOB ABERNETHY: Every December 12, U.S. cities with large Mexican or Central American populations are the sites of colorful celebrations honoring the Virgin of Guadalupe. These public devotions to the mother of Jesus may seem like cultural curiosities today, but before long, celebrations such as this may be common all over the country — because one American Catholic in three is Hispanic.

Ruben Martinez reports from Los Angeles, where Hispanics make up almost two-thirds of the Catholic population:

RUBEN MARTINEZ: In a country where devotion conjures images of prayer indoors, at home, or at church, Latino Catholics in ever-increasing numbers celebrate the feast day of the Virgin of Guadalupe in massive public demonstrations of adoration. While impressive, the observances that take place in California and the American Southwest on this day pale in comparison to the huge celebration in Mexico City, which can draw as many as five million worshippers. 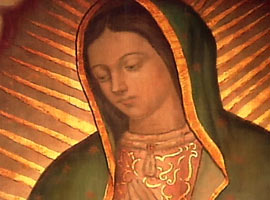 The celebration is rooted in a Mexican story nearly 5,000 years old. According to tradition, the olive-skinned virgin appeared before the Aztec Indian Juan Diego in 1531. It was a few short years after the Spanish conquest, a time of untold misery for the decimated Indian population.

Mr. LUIS LEON (Arizona State University): One of the first things she told him was, rhetorically she asked, “Am I not here? Who is your mother? Am I not here to help you? I’ve come to help the Indians.” And you have to remember that at the time of the apparition, 1531, the Aztec capital had just been conquered 10 years earlier, so Indians were literally dying by the millions. And Guadalupe’s apparition healed those wounds.

MARTINEZ: Diego asked the virgin for a sign that would serve as proof of her appearance. With winter approaching, she is believed to have showered him with dozens of red roses, and her image was emblazoned upon his cloak.

Devotion to the virgin is more than just a mere affirmation of faith. It is also a way for Mexicans and Latin Americans to give flesh and spirit to their mixed European and Indian identity. And in this era of migration, the virgin also crosses borders. 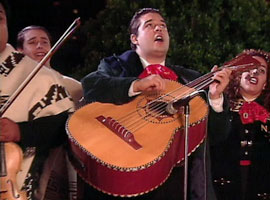 Tens of thousands made the pilgrimage to Our Lady Queen of Angels Church, better known as La Placita, the original pueblo church of Los Angeles, which features a huge outdoor altar to her.

Father ALBERTO VASQUEZ: You know, when our blessed lady appeared to Juan Diego, the very first thing he heard was music, and that’s very important to our — for our culture, music, flowers. So music being such an important thing for us, it’s — just has to be that way that we’re going to salute somebody we love with music.

MARTINEZ: The numbers of virgin devotees have increased sharply in recent years with the massive influx of immigrants from Mexico and Central America. In Los Angeles alone, the day before the feast day, some 50,000 people came to the old Olympic Coliseum to worship* the lady whom they call the Empress of the Americas. For 19 years, Maria Aguilar has been a member of the Guadalupe Devotional Group. This year she led the rosary at the coliseum.

Ms. MARIA AGUILAR: This was very, very unique and very special because we had so many people praying to our blessed mother in their own language. It was beautiful.

MARTINEZ: Among the many rituals of the feast day is a pilgrimage to a place of worship. In Los Angeles, they come from all over the city. In the wee hours at La Placita, faithful sing the “Mananitas,” a traditional Latin American birthday song. 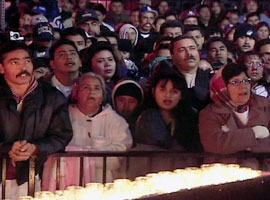 Ms. MARTHA SANCHEZ (Through Translator): Wherever we are in the world, wherever there are Latinos, the virgin is there for us.

Mr. ERNESTO REYES: We know that we have hope in life when we think about her and everything.

Ms. LEONARDA SOTOMAYOR (Through Translator): The faith is strong in Mexico, the love people have for the virgin, but you feel it more here because we are far from our homeland.

Mr. LEON: The immigrant experience, whenever a person is coming, is one of tremendous disorientation and loneliness and fear. It’s a very frightening experience, entering into an unknown land. Guadalupe adds solace and comfort, just like she did in the beginning to the Indian Juan Diego. She protected him. She was going to comfort him. She does the same to immigrants.

MARTINEZ: Much of the mystical experience of Guadalupe takes place in public. She is represented in hundreds of murals on the streets of cities throughout the Southwest and increasingly in parts of the Midwest. 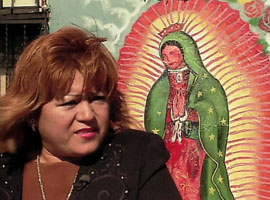 Ms. AGUILAR: As you walk in East L.A., what do you see on the streets, on the murals, on the cars? It’s our Lady of Guadalupe. And sometimes, you know, you say, “My gosh, what is it about this blessed mother? We don’t see any pictures of Jesus anywhere. We don’t see any crosses; maybe one or two crosses along the way. But you see her everywhere.”

MARTINEZ: Eva Rivera owns a furniture store in South Central Los Angeles. She commissioned a mural of the virgin for her business.

Ms. EVA RIVERA (Through Translator): I got the idea because people would constantly graffiti my walls, and I don’t know, thank God, ever since I had the mural made, everything has changed.

MARTINEZ: Even religious symbols are vulnerable. Vandals recently defaced Rivera’s mural and dozens of others in Los Angeles, prompting an outcry from virgin devotees.

Ms. RIVERA (Through Translator): It made me very mad to see that, and I said, “What kind of people would do such a thing?” Then I looked for someone to restore it.

MARTINEZ: For many devotees, whether one, two, or more generations removed from the old country, the virgin seems to offer hope, no matter where they are on their journey from country to country or language to language. With the numbers of Latino Catholics steadily increasing in the U.S., the virgin’s feast and other Old World traditions will likely be more and more visible in the American religious landscape in years to come. Indeed, the virgin’s hold on her flock appears to be even more powerful on this side of the border, where the immigrants, it seems, need her more than ever.

For Religion & Ethics NewsWeekly, this is Ruben Martinez in Los Angeles.