BOB ABERNETHY: During the Christmas season, it’s traditional in the U.S. to hear Handel’s “Messiah.” It tells the story of Jesus’ life and resurrection, and in the English tradition, uses a boys’ choir. The Washington National Cathedral Boy Choristers have been singing religious music since 1909. All 18 boys, ages nine through 14, attend St. Albans school, the cathedral’s private school for boys, and receive generous scholarships. In addition to their schoolwork, they spend up to 16 hours a week practicing under the direction of organist and choirmaster Douglas Major.

Mr. DOUGLAS MAJOR (Organist and Choirmaster): The sound of boys’ voices is a very unique kind of sound, and there’s nothing like it. It’s — it can be soft and gentle and sort of warm and fuzzy, or it can be very brilliant and powerful. 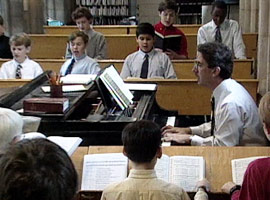 WILL LOCKART (Chorister): Well, Handel’s “Messiah,” as Mr. Major says, it’s a masterpiece. And it’s really fun to sing. We have to practice a lot, though.

THEODORE “BEAR” BELLINGER (Chorister): I mean, and sometimes it does get kind of annoying because like there’s some days you just don’t want to come in. But it’s fun.

CHRISTOPHER ELDRED (Chorister): On a good day, I can go to a high C. Regularly, I can go to about a high A. But, you know, there are kids my age who can go up to a G above the staff, and, you know, I just think that’s astounding. I can’t do that.

Mr. MAJOR: There comes a time in every boy’s life when he reaches adolescence and, you know, the whole chemistry changes and the voice itself changes. It’s a really hard time for some boys because they love to sing.

FRASER HENDERSON (Head Chorister): Friends make fun of us sometimes, but we beat them up occasionally and we joke around. Nothing bad.

LOCKART: I’m just a regular kid. We like girls. We eat at McDonald’s. We do what regular kids do. Usually, I don’t listen to classical music. That’s because it’s a — it’s always in my head.

Mr. MAJOR: My hope is that everybody in the audience will really get a sense of the fact that we’re on a journey here.

Unidentified Chorister: It’s telling the story of Jesus Christ and God and the Holy Spirit.

(Excerpt from performance of “Messiah”)

Unidentified Chorister: And then they have the big Hallelujah Chorus, which is, of course, the biggest movement, and then a — the ending, an amen. Big — oh, it’s about 10 pages.