JOHN DANCY: This Easter season, the story of Jesus’ death and resurrection is being retold not only in churches but also in pop culture. Kim Lawton takes a look at the enduring interest in the Passion story.

KIM LAWTON: At Easter, perhaps more than at any other time of the year, Christians love to retell the story of Jesus, and especially of his last days on Earth.

Mr. WALT WANGERIN Jr. (Writer in Residence, Valparaiso University): When the story is told, we enter into the story, we become a part of it — and now here’s the important part — and it shapes us. It shapes our spirit, it shapes our capacity for interpreting the universe much more than any kind of intellectual doctrine can shape us. 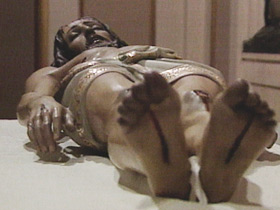 LAWTON: Author Fulton Oursler called it THE GREATEST STORY EVER TOLD a story that includes betrayal, abandonment, crucifixion, resurrection, and redemption. People continue to retrace and explore that story, which Christians call the Passion of Christ.

Mr. WANGERIN: It comes from the Latin, which could mean feeling, but goes deeper than that. It generally embraces that feeling which is pain, which is suffering, so that when you say “the Passion of Jesus Christ,” we’re talking about the very specific suffering that Jesus went through.

LAWTON: Over the centuries, the Passion has been retold in numerous ways: through art and through music, such as Haydn’s classic Easter piece, “The Seven Last Words of Christ.”

(Excerpt from “The Seven Last Words of Christ” performance)

LAWTON: In many places around the world, the Passion story is reenacted in villagewide processions and in drama. The most famous Passion play is in Oberammergau, Germany, where the drama has been performed nearly every 10 years since 1633. It will be presented again this year, beginning next month. Working with Jewish leaders, residents have tried to take out anti-Semitic overtones while still being faithful to the original script. Other modern adaptations of the story don’t worry about taking dramatic license. 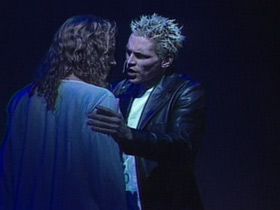 Here on Broadway, the Ford Center for the Performing Arts has opened a revival of Andrew Lloyd Webber’s hit musical, “Jesus Christ Superstar.” The controversial 1971 rock opera retells the Passion story through the eyes of Judas, the disciple who betrayed Jesus.

LAWTON: It’s an earthy production that sprinkles modern glitz and technology into the ancient story. Jesus is a confused and often-reluctant hero.

Ms. MARY ANN BRUSSAT (Co-author, SPIRITUAL RX): So this is Jesus as obviously a very charismatic and distinctive person, but the emphasis is also upon Jesus’ humanity. It’s almost, you know, raising the questions of: Do we need somebody who’s a superstar, or do we need someone that we can really grasp to ours — to ourselves.

LAWTON: There are also several new books out about the Passion. Two titles examine it from the perspective of Pontius Pilate, the Roman governor who washed his hands of Jesus’ condemnation. Walt Wangerin has a new children’s book where the Apostle Peter is the narrator.

Mr. WANGERIN: One of the powers of any living story is that it can be told differently every time and never change the paradox.

LAWTON: This season the most visible retelling may be on the small screen. On Easter Sunday evening, ABC is broadcasting “The Miracle Maker,” a two-hour film with 3-D clay animation and sophisticated computer effects.

LAWTON: The fairly traditional recounting of the story, seen through the eyes of a young girl who was healed by Jesus. 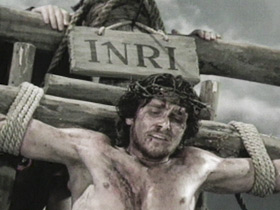 LAWTON: The Odyssey Channel is rebroadcasting MARY, MOTHER OF JESUS, a made-for-TV movie that was a big hit for NBC last fall. It tells the story of Jesus from the perspective of his mother, Mary.

LAWTON: On May 14th and 17th, CBS presents a four-hour miniseries called JESUS, another fairly traditional account. When it was shown in Italy, the miniseries drew a huge audience, one reason why CBS scheduled it for the May ratings sweeps. Mary Ann Brussat and her husband, Frederic, review books and movies for SPIRITUALITY & HEALTH magazine and other publications.

Mrs. MARY ANN BRUSSAT: To me, it’s very interesting that these particular films would come in our time, particularly with their emphasis upon the miracles, because it — it’s almost in line with the cultural interest in health and healing. This look at Jesus as a miracle worker and — is also consistent with our cultural need for answers, for some — for proof, for signs.

LAWTON: One of her all-time favorites is the 1977 epic, six-hour miniseries JESUS OF NAZARETH a popular video rental. But she says each film has something to add.

Mrs. BRUSSAT: All of the films basically ask, “Who is this man?” And each filmmaker has another take on the answer to that question.

LAWTON: What is it about this story that’s so compelling, even outside the church? Many say the themes of the Passion still resonate.

Mrs. BRUSSAT: We’ve all, in a sense, betrayed someone like Judas does.

We’ve all been confused like the disciples or jockeying for power, as they’re doing; for position, as they do. We’ve been afraid of change, like the priests in the temple. We’ve had all of those different roles, and we’ve also witnessed suffering or suffered ourselves. 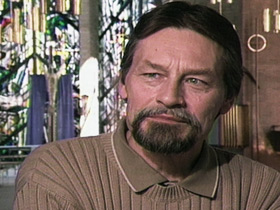 LAWTON: Some traditional Christians don’t like the pop renditions of the Passion, fearing the religious message may be trivialized or even distorted, all the more reason, Wangerin says, for Christians to continue their own faithful retelling. He says the most important recounting comes inside the church through the sacraments and through the sermon and, especially during Holy Week, through the special observances that allow Christians to experience and reaffirm their faith.

Mr. WANGERIN: The telling of the story collapses time, so that when the 2,000-year-old story is told now, it’s new, now, here, for me, and this Christ has risen. Once and for all, I’m at that cross, I’m at that empty tomb, I recognize the angels who say, “He’s not here. Why are you looking for the living among the dead?”