Editor's Note: During Pope Francis’ upcoming visit to Jordan (May 24), he has invited Syrian refugees and disabled people to join him at the Jordan River Baptism site, revered by many Christians as the place where Jesus was baptized.

KIM LAWTON, correspondent: These days, the Jordan River is smaller—and muddier—than first-time visitors are often expecting. But for many Christians, Jews and Muslims, it’s one of the most sacred places on earth. According to the Bible, Joshua crossed the Jordan River when he led the Israelites into the Promised Land. The Jordan River was where the Prophet Elijah was taken into Heaven, and his successor Elisha took up his mantle. It’s where John the Baptist lived and preached, and Jesus was baptized and began his public ministry.

LAWTON: Scholars and archeologists have long debated exactly where at the river the events took place, and there are rival theories. But recent discoveries have focused attention on this place, Wadi al-Kharrar, in the country of Jordan, near the Dead Sea, just over the border from Israel. Rustom Mkjian is assistant director of the site. He looks to the Bible for confirmation. 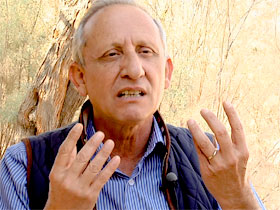 LAWTON: According to the Gospels, John the Baptist came in the spirit and strength of Elijah. He lived and worked in a place called Bethany Beyond the Jordan.

LAWTON: Accounts from Christians as far back as the fifth century describe a major pilgrimage site along the Jordan River associated with Elijah, John the Baptist and Jesus. But with the Crusades and the rise of the Ottoman Empire, the pilgrimages gradually stopped, and the site was eventually buried by layers of history.

Then in 1897, a mosaic map from the sixth century was discovered in the floor of a Jordanian church. It gave archaeologists new clues about where the ancient pilgrimage site may have been. But World Wars I and II and then the Arab-Israeli wars made the area inaccessible. For decades, it was a militarized zone full of land mines. After the 1994 peace treaty between Jordan and Israel, the mines were cleared and archaeologists could finally begin searching.

The discoveries were stunning. In the barren wilderness, there were the ruins of a large monastery complex built in the fifth century, which matched early pilgrim descriptions of a church built on the place where they believed Elijah was taken into heaven. The complex was built over an ancient cave, where pilgrims said John the Baptist had lived.

MKHJIAN: From Elijah's Hill, where we discovered the monastery, down to the River Jordan, three kilometers to the west, it's a huge open monastery. Because we have hundreds of caves scattered around this holy valley. And monks and hermits stayed here. 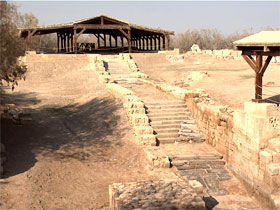 LAWTON: A small distance away, where the river once flowed, ruins were discovered of baptism pools and of five different churches, all built over successive periods of time. And there were the remains of marble steps which would have led down to the water. All of this, too, matched sixth-, seventh-, and eighth-century pilgrim descriptions of churches built to revere the place where John baptized Jesus.

MKHJIAN: Why did they insist to build their churches here? Depending on the Bible, depending on the pilgrims’ accounts and the archeological studies, we know this is the spot where Jesus baptized and Christianity started.

LAWTON: Many churches hold special services here to commemorate the baptism of Jesus, which Christians consider a key event in the Gospel stories. Since the baptism launched Jesus’ earthly ministry, many here consider it the starting point of the Christian faith.

MKHJIAN: And once Jesus comes out of the water, the Holy Spirit descends and the voice of the Lord says, “Here my beloved son in whom I am well pleased.”

HADDAD: The proclamation of the one God and the Holy Trinity, that is Christianity.

LAWTON: The Jordanian royal family opened the site in 2011 for tourism and pilgrimages, but they want to keep the archaeological area as natural as possible. Plots of land surrounding the area have been given to several Christian denominations, which have begun building churches, guest houses and other facilities. Local Christians say this site more than 350 meters below sea level is a place of profound spirituality.

HADDAD: As Jordanians we carry this legacy with great pride and faith, and we want all the people to come here and see.

Last year, during Pope Francis’s pilgrimage to the Mideast, he made a brief stop in Jordan and invited Syrian refugees and disabled young people to join him for a meal at the Jordan River baptism site. Located just across the border from Israel, the spot is revered by many Christians as the place where John the Baptist lived, Jesus was baptized, and Christianity began.