BOB ABERNETHY: Now, Belief & Practice. This Sunday is Pascha or Easter for the world’s more than 250 million Eastern Orthodox Christians. They observe the Julian calendar rather than the Gregorian calendar followed by most westerners. For the Orthodox, Holy Week events began last Saturday. We spoke with Fredrica Matthewes-Green, a member of Holy Cross Orthodox Church near Baltimore, about the meaning of Pascha. 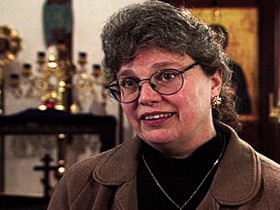 Ms. FREDRICA MATTHEWES-GREEN (Author, AT THE CORNER OF EAST AND NOW): Pascha is the most important feast in the entire church year. Everything is building up to this. This is the victory of Jesus Christ over sin, over death; it’s what sets us free. On Thursday evening, the priest will process around through the interior of the church, taking an icon painted in the shape of the body of Jesus Christ. And he nails it to the cross. It’s very powerful. It can reach deep into our thoughts. It makes it so real. We feel as if we’re really there on the road to Calvary.

The Orthodox really focus the resurrection on what happens on Saturday even more than Sunday, so they believe that when Jesus was placed in the tomb, he didn’t hang around there; that he went down into the depths of hell, where the dead were imprisoned by Satan, and he began setting them free.

We’re going to be back in the church again Saturday night at 11:30, where we begin in darkness. We will exit the church and process around it three times, chanting and singing. Then when we come back, the priest stands at the door of the church and beats on it with the cross, knocks on the church very loudly and says, “Open up! Open up, you gates!” The doors of the church burst open, and it’s all full of light and full of flowers. All the candles are blazing. 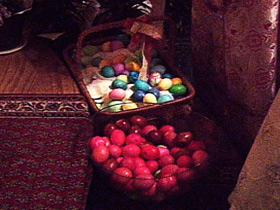 We come back inside and it’s Pascha. We have a very thrilling service, lasting two and a half, three hours, in which we sing over and over, “Christ is risen from the dead, trampling down death by death, and it crumbles in the tomb, bestowing life.”

At the end of the Pascha service, the priest hands to each member of the congregation a boiled egg. It’s dyed red to symbolize the blood of Christ.

As we progress through Holy Week and get to Easter, I feel this anticipation building and building. When it’s all over, it feels almost like entering a time of timelessness, like a suspended animation where you go through something so very, very intense and then you’re, like, floating on the other side of it.