KIM LAWTON, correspondent: On Sunday morning at the Orthodox Church of the Presentation of the Lord in Amman, Jordon, it’s standing room only. But don’t let the crowds deceive you. Christians are no more than six percent in this nation of more than six million. Still, they don’t want to be called a minority.

REV. NABIL HADDAD (Interfaith Coexistence Research Center): We are not a minority. We are small in number. We insist that we are not the minority. We were here before Islam. We are the children of this land.

LAWTON: Most of the Christians here trace their heritage to the earliest days of Christianity, when Jesus ministered in this region and then his disciples established the new faith in the surrounding areas. While Christian pilgrims from the outside often refer to Israel and the West Bank as “the Holy Land,” several important Bible stories took place on the east side of the Jordan River, in what is now the nation of Jordan. Jordanian Christians insist they should be considered part of the Holy Land as well. 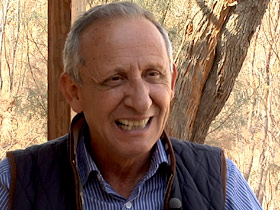 RUSTOM MKHJIAN (Baptism Site Commission): The Jordan was not the border. Archeology and religion do not have borders. So this is the center of the Holy Land indeed.

LAWTON: Some of the most important sites here are by the Jordan River, where the Bible says the Prophet Elijah was taken into heaven and where John the Baptist baptized Jesus. Excavations in the area began in 1996, after Jordan had signed a peace treaty with Israel and removed land mines from the area. Archeologists unearthed a cave where some say John the Baptist may have lived, as well as ruins of ancient churches, some dating back to the fourth century. Rustom Mkhjian is assistant director of the Baptism Site Commission.

MKHJIAN: Depending on the Bible, depending on the pilgrims’ accounts and the archeological studies, we know this is the spot where Jesus baptized and Christianity started.

LAWTON: In the Bible story, after his baptism, Jesus began his public ministry. So Christians here say this is where Christianity really began. 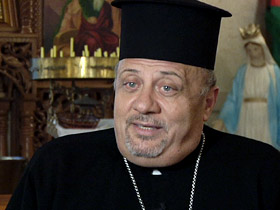 MKHJIAN: This is one of the holiest three sites for Christians on earth—Bethlehem where Jesus was born, here where Christianity started, and Jerusalem, the end of life. So the entire circle wouldn't be complete without these three sites.

LAWTON: Father Nabil Haddad is a priest in the ancient Melkite Catholic Church and says he shares a birthplace with the Prophet Elijah. He says Christians are proud of their legacy here.

HADDAD: We are the ones who inherited this birthplace of Christianity. I think we are agents to carry this as witnesses to the whole world.

LAWTON: For centuries, Jordan’s Christian community has played a prominent role in society.

DARYL BYLER (Center for Justice and Peacemaking): Their social influence is certainly well beyond their numbers. Very major influence in the fields of education, in the medical field, operating some of the best hospitals in the country. They also have made a significant contribution in fields of agriculture. 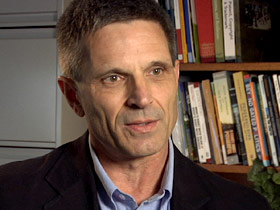 LAWTON: Daryl Byler is executive director of the Center for Justice and Peacemaking at Eastern Mennonite University in Virginia. He spent the last 6 years in Jordan with Mennonite Central Committee, where he worked with local Christians.

BYLER: Their institutions are there to serve to serve other Christians but also Muslims and others in the country, so they make their services available, and they see that as their way of giving witness to the light of Christ.

LAWTON: Bishop Benedict, the Greek Orthodox bishop of Amman, says serving others is how Christians here live out their faith.

BISHOP BENEDICT: (via translator): Especially in our doctrine in the Orthodox Church, the most important thing is love. And love, you see—we can't talk about love, because love needs practice.

LAWTON: That impulse has been particularly evident in the Syrian refugee crisis. Almost 600,000 refugees from neighboring Syria have ended up in Jordan, generating a massive humanitarian crisis. The Christian community has played a key role in the response. 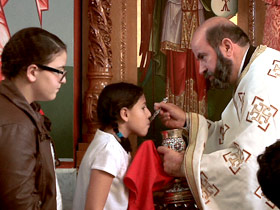 WAFA GOUSSOUS (Orthodox Initiative): Those people became uprooted, and they have no place. But of course today Jordan is taking the biggest number of refugees, and this is our moral duty as Christians in the country, to be there, to support them, to make them feel, as much as possible, at home.

BYLER: I was just very much inspired especially in this more recent dealing with the Syrian refugees that are flooding into Jordan, the way that the Christian community stepped up to the plate. They really saw this as an opportunity to make a statement to our Muslim neighbors that, “We are here for you.” They stepped up to the plate in a big way.

LAWTON: Many Christian leaders here say they have good relations with Jordan’s King Abdullah and members of his royal family.

HADDAD: We were lucky to see that His Majesty, King Abdullah, has used what I call the interfaith diplomacy. So that interfaith dialogue became part of the Jordanian diplomacy.

LAWTON: Compared to other predominantly Muslim countries, Christians here have much freedom of religion. 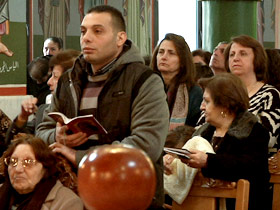 BYLER: They are free to meet, to worship, to provide services, to run schools and hospitals. The line is at the point of you’re not allowed to try to convert a Muslim to Christianity. There is more conversation about that, that because it is okay in those societies for Christians to convert to Islam, that there should be the reciprocal. And those conversations are happening. When that will actually change as a policy or as a practice? I don’t know.

LAWTON: Jordanian Christians and Muslims have generally lived together in peace. But some Christians are concerned about rising Islamic extremism in other parts of the Middle East. They worry their community could be threatened if that takes hold here.

BENEDICT (via translator): Because of the problems which happened in Syria, Lebanon, Afghanistan, Iraq, Egypt, Saudi Arabia, all this area, you see, they send the fanaticism to this area.

LAWTON: Byler says relations for Christians in Jordan have also been complicated by politics, and the foreign policy decisions of the US and other Western countries. 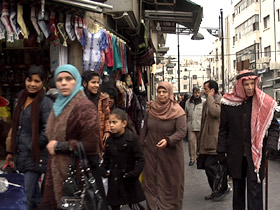 BYLER: They are perceived by Muslim communities as being connected to the Western Church. And the West is viewed as having just imposed several wars on the region. And those wars are sometimes viewed as anti-Muslim campaigns. And so the Christians in Jordan and in the Middle East bear that burden of being identified with that.

LAWTON: At the same time, Christians in Jordan say many in the West aren’t even aware that they are here.

BYLER: Many Western pilgrims come to see the Holy sites. Traditionally it’s spoken of in the region as, “They come to see the old stones, but we are the living stones. We are the modern day embodiment of Christ. And people don’t even know that we exist here.” So there is that frustration.

LAWTON: But according to many Jordanian Christians, their biggest challenge is making sure their existence continues. Amid economic and political instability in the region, numerous Christians have chosen to emigrate. In addition, Christians have significantly lower birth rates than local Muslims. Consequently, as is the case in many parts of the region, their numbers have diminished significantly in recent years.

HADDAD: How can we imagine a Middle East without Christians?

LAWTON: At the Jordanian Interfaith Coexistence Research Center, Father Haddad says all faiths must work together to maintain a strong presence for the other.

HADDAD: This region has always had the three religions. This is the birthplace of Islam, Christianity and Judaism. So it is part of the history, it’s part of the presence, and it’s the responsibility of the Christians and the Muslims to work together, to protect this history and the value in it.

LAWTON: That’s the only way, he says, to ensure the future of this Holy Land. I’m Kim Lawton in Jordan.

Jordanian Christians insist some of the most important ancient sites, such as the site of Jesus’ baptism, are on their side of the Jordan River. “We are the ones who inherited this birthplace of Christianity. I think we are agents to carry this as witnesses to the whole world,” says Father Nabil Haddad, a priest in the ancient Melkite Catholic Church who lives in Amman. Correspondent Kim Lawton reports on the Christian presence in Jordan.

Use our interactive map to see the locations of some of the sites mentioned in this story: