BOB ABERNETHY: A cold, early spring morning in Milford, Michigan. As he has every day for 30 years, Thomas Lynch sits down to write. He is a successful essayist and, first of all, a poet. But he writes only part time.

His full-time job is across the street. Like his father before him, Lynch is Milford’s funeral director. 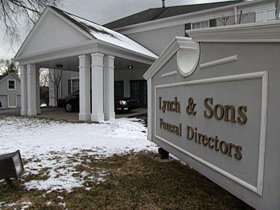 ABERNETHY: Poetry and funeral direction may seem strange companions to some, but not to Lynch.

MR. LYNCH: It is the same enterprise: to organize some response to what is unspeakable. We need a way to say unspeakable things, and funerals do. So do poems.

ABERNETHY: On this day, with the family’s permission, we were present at the funeral of a 30-year-old Milford man killed in a motorcycle accident.

MR. LYNCH (to Funeral attendees): Ladies, if you would take a seat. Mass will be starting shortly.

ABERNETHY: Lynch stood with the family as they said goodbye and the casket lid was closed. He believes strongly in the importance to the living of being able to see the dead.

Lynch also values the funeral as a ceremony. Honoring the dead, he says, gives meaning to life.

MR. LYNCH: The fashions have changed, but the fundamental obligation of a funeral to sort of bear witness to a death in the family and to initiate remembrance — that’s pretty much the same.

MR. LYNCH: Down this street, I don’t think there is a house in the past 30 years that has not had a death in the family. 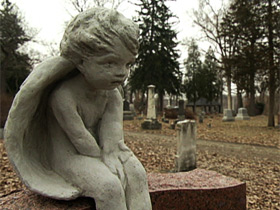 ABERNETHY: Most deaths, says Lynch, are of the aged, peacefully. But too many, he adds, are random and violent. The worst are the deaths of children.

MR. LYNCH: I remember that as a younger person, I used to often shake my fist in God’s face when there was a death of a child and say, you know, “What did you have in mind here, God?”

ABERNETHY: Lynch acknowledges that the heartbreak of all that can be overwhelming.

MR. LYNCH: In a very real sense, grief is, you know, the sort of tax we pay on loving people. And you see abject, acute grief a lot.

ABERNETHY: Lynch says all that pain both tests his faith and requires it.

ABERNETHY: On such days, I asked, what do you do?

MR. LYNCH: Pray. Yeah. That seems to work. And I don’t know if it’s the saying of it or someone at the other end hearing of it. And this is like poetry, you know. But it works. 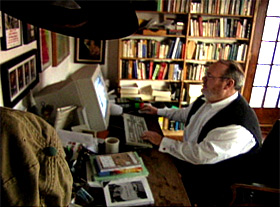 ABERNETHY: What also works, for Lynch, is the antidote of writing: creativity that combats the depression that can accompany what some call “the dismal trade.”

Lynch’s wife, Mary, an artist, has a studio next to their house. She says dealing with death magnifies the value of life.

MARY LYNCH: When I think I am having a bad day all I have to do is look across the street and realize that somebody else has it worse.

MR. LYNCH: Well, I’m glad to be alive. You know every day you wake up is a bonus.

ABERNETHY: Lynch travels often — here, to the College of Charleston, in South Carolina — to do readings from his books. As usual, he received a glowing introduction.

MR. LYNCH: It’s always nice to hear such kind things said about you in the present tense, and to be vertical when you hear them.

ABERNETHY: Lynch read a poem about a man facing up to the fact that someday he will die. The chances of dying, Lynch likes to say, hover around 100 percent.

MR. LYNCH (reading poetry to audience): “The future thus confined to its contingencies, the present moment opens like a gift. And what to make of this? At the end, the word that comes to him is ‘Thanks. Thanks.'” 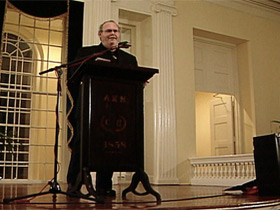 ABERNETHY: The titles of Lynch’s books disclose how much his trade influences his writing: STILL LIFE IN MILFORD; THE UNDERTAKING, a National Book Award finalist; and his latest, BODIES IN MOTION AND AT REST.

As often as he can, Lynch visits Ireland, where one of his relatives left him a cottage. He says he loves the sounds of the language there, and those sounds influence his speech and his poetry. Often, he listens to Irish radio while he writes. Lynch is much admired in Milford. He is also becoming known nationally, not only for his writing but for his opinions.

ABERNETHY: Lynch lives in the same county as Doctor Jack Kevorkian, now in prison for assisting with suicides.

MR. LYNCH: To me, assisted suicide sounds oxymoronic, you know, like “holy war.” If the only way to get rid of suffering is to get rid of the sufferer, then I say we have not looked at our other options. I see Jack Kevorkian as a serial killer.

ABERNETHY: Lynch thinks specific arrangements for funerals should be left up to the survivors. The dead, he likes to say, don’t care. On the other hand, he has written about his own wishes. Naturally, it is a poem.

MR. LYNCH (reading poetry): “I want a mess made in the snow so that the earth looks wounded, forced open, an unwilling participant. Go to the hole in the ground. Stand over it. Look into it. Wonder and be cold. But stay until it’s over, until it’s done.” 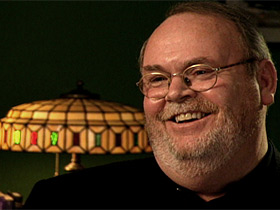 MR. LYNCH: When I see people at this most difficult time in their family history, I am also seeing what is best about our species, you know. The attachments and the affection and the faith.

ABERNETHY: Lynch was asked how he comforts the bereaved.

MR. LYNCH: What I tell people is to find ways that grief can be managed — not gotten out of but gotten through. You tell them, I can’t fix this, but I can be with you through this.

ABERNETHY: Ceremony, symbol, metaphor — they are the essence of both of Lynch’s callings: what he sometimes calls, with a smile, “the literary and mortuary arts.”

SEVERSON: One bit of advice from Tom Lynch. He says he’s learned not only that life can be short, but that if you’re angry at someone and that person dies before you’ve made up, you can suffer a lot. Lynch told me, “I don’t hold grudges very long.”

A Poem by Thomas Lynch:

Refusing at Fifty-two to Write Sonnets

It came to him that he could nearly count
How many late Aprils he had left to him
In increments of ten or, say, eleven
Thus:sixty-three, seventy-four, eighty-five.
He couldn’t see himself at ninety-six —
Humanity’s advances notwithstanding
In health-care, self-help, or new-age regimens —
What with his habits and family history,
The end he thought is nearer than you think.

The future, thereby bound to its contingencies,
The present moment opens like a gift:
The greening month, the golden week, the blue morning,
The hour’s routine, the minute’s passing glance —
All seem like godsends now. And what to make of this?
At the end the word that comes to him is Thanks.

THE UNDERTAKING: LIFE STUDIES FROM THE DISMAL TRADE BODIES IN MOTION AND AT REST: ON METAPHOR AND MORTALITY STILL LIFE IN MILFORD: POEMS