BOB ABERNETHY, anchor: As a result of the Human Genome Project, we are now able to locate genetic mutations and know much more about a person’s medical future than ever before. And this new knowledge has given rise to many medical, legal, and ethical questions. Betty Rollin has our report.

BETTY ROLLIN: Marcy Golub is not having an ordinary blood test. She’s being screened for BRCA 1 and 2—genetic mutations that frequently lead to breast and ovarian cancer.

ROLLIN: As a result of her family history, Marcy is at risk for having the mutation, especially since her sister tested positive for BRCA 1. Before her blood was drawn, Marcy, like all patients planning to undergo genetic testing, was encouraged to meet with a counselor. 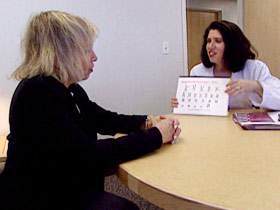 MS. JILL STOPFER (Genetic Counselor, University of Pennsylvania Cancer Center): What I try to do with everyone is to help them make their own best decision about what’s right for them. To make sure that someone understands the risks and benefits and limitations of testing; to make sure when the results are available, the results are understood.

ROLLIN: Some patients may not want to deal with the results if they’re bad.

MS. STOPFER: If someone is expressing feelings of concern about testing to the point where they are really not sure, I’ll encourage them to follow their feelings about what to do.

ROLLIN: In Marcy’s case, a positive finding for BRCA 1, the mutation she’s most likely to have, would mean that her chances of getting breast cancer are more than 50%, and of ovarian cancer, 20 to 40%. Ovarian cancer is her greater concern since it’s harder to detect.

MS. STOPFER: If she’s positive, we will recommend strongly that she have her ovaries removed.

MS. GOLUB: I feel that if I have this prophylactic surgery, I’m one step ahead of the game if I have a mutation. If I don’t, I can breathe easy. 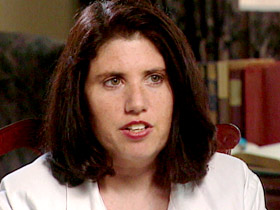 MS. STOPFER: We caution people that everyone has some risk for developing cancer. This doesn’t make you risk free, but the level of risk is certainly very, very different.

ROLLIN: There are some nonmedical risks as well. The release of genetic information may cause people to lose their insurance—even their jobs.

JUDITH BENKENDORF (Genetic counselor and policy consultant): People are so afraid of discrimination based on genetic information that is learned from tests that they are not getting tests and they are also not participating in research protocols.

ROLLIN: As of now, laws dealing with genetic discrimination vary from state to state. Federal law protects only those who have group insurance policies. Bills in the House and Senate that would provide more extensive coverage are pending. 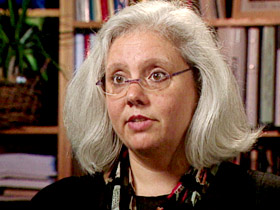 MS. BENKENDORF: There is a tremendous tension in family members between the right to privacy if you have a genetic test and you don’t want anybody else to know versus the responsibility to share that information with other family members.

ROLLIN: Within families, there also may be other questions and conflicts: whether to test one’s children—whether to have children, even whether to marry.

For example, Orthodox (and Hasidic) rabbis created Dor Yeshorum, a program to test for Tay-Sachs and other diseases, which particularly threaten the Jewish community. Since Orthodox Jews are against abortion, they screen adolescents, with the hope of preventing marriages between two carriers.

Religion plays a different sort of role in the Getz family. Fred Getz has neurofibromatosis 2, a rare neurological genetic disorder that has made him deaf and partially paralyzed. Ten years ago, the Getzs allowed their children to be part of an NIH study which resulted in the discovery of the NF2 gene. The Getzs were pleased to help science but had moral and religious qualms.

MRS. DONNA GETZ: We are pro-life; we didn’t want the testing used to encourage abortion, period. We think that every child is a blessing. We think that children deserve the chance to be born and the right to live. No matter what.

MR. FRED GETZ: There is no reason why a child can’t exist just because he has a genetic disorder. 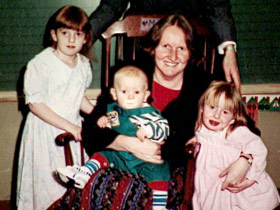 ROLLIN: Donna and Fred Getz are particularly sensitive about this issue because two of their three children, 16-year-old Tiffany and 11-year-old David, tested positive for the NF2 gene.

As a result, the family took what preventive action they could.

MRS. GETZ: The oldest child had two surgeries; the first surgery, unfortunately, was not successful and it was to remove a tumor that was putting pressure on her auditory nerve that was starting to impact her hearing. Unfortunately, in her case, the hearing was not saved, but her facial nerve was saved so that part was successful. The other child, we had the first tumor removed. Unfortunately, we’ve recently found that he now has a tumor growing on that side on a different nerve.

ROLLIN: This family had a choice about being tested, and for the most part, they’re glad they did.

DAVID GETZ: I don’t know. It’s just something deep down that tells me it’s really comforting. So if I didn’t know, it would be more scary. I’ve had a lot of pain because of the tumors, but I know they are tumors. I know that they are not something else.

TIFFANY GETZ: For me to able to monitor things from when I was a little kid, catch things early, I think it was a very good idea.

MRS. GETZ: I would have to say I have mixed feelings about it. If both of them had wonderful outcomes and they were cured and their hearing was saved for life, I would say yes, this was great, this is exactly what we hoped for. It’s always a gamble, but you always know that these tumors grow larger.

ROLLIN: And what about Karen, the child who does not have the gene?

MRS. GETZ: She’s very glad she doesn’t have it, but she wishes they didn’t and she wishes her dad didn’t, and she sees what they go through and she doesn’t know what will happen with them in the future. And you know kids get scared. Shoot, grownups get scared. What’s their future going to be like? She loves them.

ROLLIN: As genetic testing becomes more common, fear will continue to play a major role: fear of the disease if the test is positive; fear if there’s nothing one can do about the disease; fear of discrimination; and fear, simply, of the burden of knowing. As a result, some people will forgo genetic testing. But many more are likely to want the information, especially if it will lead to a course of action that might make a difference.