BOB FAW, Correspondent: In his distinguished broadcasting career, Phil Jones covered presidents, politics, war and mayhem. But nothing prepared him for the devastating medical diagnosis he was given two years ago.

FAW: Or MDS, a disease of the bone marrow which leads to leukemia. Since Jones had a very aggressive form of the disease his diagnosis was a virtual death sentence.

JONES: I was 75 at the time, and it was, it was devastation. I sat there with tears. My wife pat had tears. I looked over at her, we were both crying; I cry today as I recall it? 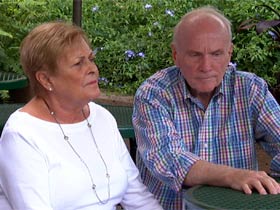 FAW: Stunned, but then determined, Phil and Pat Jones quickly went online and learned of a possible treatment: a stem cell transplant. Then, both at a world-renowned cancer center, and from his own oncologist, Jones got more bad news.

JONES: I go in and say to him, ‘what about a stem cell transplant? And without any pause he looked at me and said ‘you are too old.’

FAW: Fortunately, for Jones, the Moffitt Cancer Center in Tampa, Florida was willing to look beyond the question of age. Alan List, president and CEO of Moffitt is also Jones’ doctor.

DR. ALAN F. LIST (Moffitt Cancer Center): Probably ten years ago I think the age limits were about 65 years of age. It got moved within the next few years up to 70 years of age, then finally there was a recognition it’s not your age, it’s really how medically fit you are.

FAW: While Dr. Claudio Anasetti, chair of Moffitt’s Department of Blood and Marrow Transplant, warned Jones about possible risks, he also reassured him. 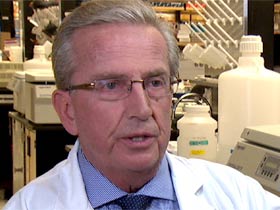 DR. CLAUDIO ANASETTI (Moffitt Cancer Center): Transplant was once seen like the sledgehammer you know, very high intense therapy that actually was almost bringing patients to death in order to cure their disease. And right now the treatments have been quite refined. We developed new technology and with the new technology patients can survive it.

FAW: Of course nothing could proceed without the right donor. Although Jones didn’t know his donor’s name at the time, the perfect match was 35 year old Eric Priest.

JONES: Eric Priest is right out of central casting. I mean, here is a guy who is handsome, a patriot, joined the Navy, and is a man of faith.

FAW: A lieutenant in the Navy, Priest had volunteered to be a stem cell donor almost 17 years earlier.

FAW: On the Fourth of July two years ago, Jones entered Moffitt for his transplant. Eric Priest’s stem cells had been extracted the day before in California and delivered to Phil Jones’ hospital room in Florida. 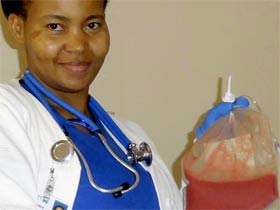 JONES: July 4, 2012 was probably my biggest July 4th ever… I looked at it, and it was my life-saving. That bag had my chance to live.

FAW: Though Medicare and insurance paid most of the charges, the procedure is costly. The recovery, grueling. Though in this case he wasn’t exactly coddled.

JONES: This nurse tech, Maria Garcia, walks up to my bedside and matter-of-factly says, “Now I want you to listen up. I’m going to tell you what you have to do if you want to come out of here alive.”

MARIA GARCIA (Moffitt Cancer Center): You need to do your part. You need to feel like you’re in a boot camp. You’ve gotta come here with a kind of kick-butt attitude you know: you’re gonna take this on, you’re gonna do what you have to do no matter how you feel about it.

FAW: A little more than a year after the transplant procedure, a grateful patient finally met his donor – and gave him a pewter clock.

JONES: And the inscription was “Eric Priest. Thanks for adding time to my life.” I said to him, “You know, you’ve given new meaning to serving your country and mankind.” And I also said, “I don’t know whether to salute you or hug you.” and at that point, I saluted and we both embraced, and hugged.

FAW: Priest, it turns out, is not only a naval officer but also an ordained Baptist minister. 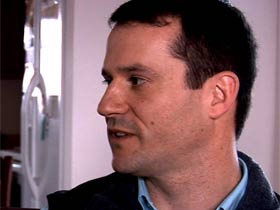 PRIEST: It helped me to be able to witness and to, to show the love that God wants us to show. I don’t wanna push it down people’s throat but I do wanna serve, I do wanna witness. I do want to live my life loving others as Jesus has loved us.

JONES: During all this period I was in my bed in Moffitt and I also felt God’s hand in the whole thing. And I, I never doubted for a moment that I wouldn’t make it.

FAW: Though three of the five MDS patients over 75 who received stem cells transplants nationwide have not survived, Phil Jones is in complete remission. And if it seems miraculous, Moffitt wants the medical world to know that it really isn’t.

LIST: They’re not seeing how we’re able now to do things better, less toxic and expand the potential for people to be able to get, to receive this kind of procedure. If we can get that message out to physicians in the community that are managing these patients, it’s not age anymore, if someone is fit, then they could potentially be a candidate for transplant. And potential cure.

FAW: So the story here isn’t just about Phil Jones. Potentially, it’s also about how many more people like him could be helped if more doctors knew how much progress has been made with transplants.

ANASETTI: If we were able to optimize access to transplant, we would triple the number of transplant procedures performed today.

FAW: And that, says Phil Jones, should be a wake-up call -- for patients, and doctors, everywhere.

JONES: I want my story to be sort of a shot across the bow, if you please, for doctors all over this country. Not just for myelodysplasia and MDS but for other, other diseases. I want them to stop and think before they look at the next patient and say ‘you’re too old for the cure.’

FAW: Phil Jones, who celebrated his 53rd wedding anniversary last month, might be the exception to that “you’re too old “ rule, but with each step and every new day in remission, it seems clear that old rule is meant to be broken.

For Religion and Ethics Newsweekly, this is Bob Faw in Tampa, Florida.

Two years ago on July 4, facing a virtual death sentence from cancer, former veteran CBS news correspondent Phil Jones underwent a stem cell transplant with cells provided by an anonymous donor. As Bob Faw reports, the procedure was effective and a year after the transplant Jones for the first time met the donor, Eric Priest, a navy lieutenant and ordained Baptist pastor who said donating the stem cells was just part of his ministry.