MARY ALICE WILLIAMS: Now, a dilemma in many churches and parishes: should a pastor offer people any counseling on sex -- except abstinence outside marriage? Does saying anything about safe sex seem to condone behavior the Bible forbids?

It's a real issue in the deep South, especially in black churches, especially regarding women. In Mississippi, for instance, according to the most recent figures, 28% of those reporting new HIV infection were heterosexual black women. Our report is from Judy Valente.

JUDY VALENTE: Twenty-year-old Easha Roney spends most days at home, keeping house for her uncle. Like many young women in the Mississippi Delta, she never finished high school and can't find a job.

Sadly, Easha is like a growing number of her peers in another way. Last year, she tested positive for HIV. 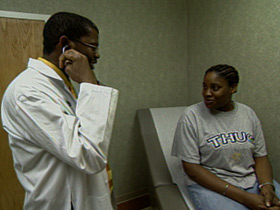 EASHA RONEY: I just burst out crying. That was my first time hearing it. I was shocked. I couldn't believe it. I was scared. I mean, I didn't understand how I could get it at a young age. How could somebody not tell me what was going on with them?

VALENTE: Here, where cotton is still king, and life for many is a hardscrabble fight for survival, the AIDS epidemic has taken deep root.

Nationwide, women now account for a fourth of all newly diagnosed AIDS cases, double the percentage from ten years ago. A disproportionate number of those women are poor, young and African American. And this poses a particular dilemma for most African-American churches.

Reverend MELVIN LEWIS (Pastor, Locust Grove Baptist Church): We just can't be sanctimonious and church folks and not be involved. It's the leading cause of death among blacks and our young men and women between the ages of 25 and 44. What are we doing?

VALENTE: Yet African-American churches -- a major force in the rural South -- have been reluctant to address AIDS prevention, fearing it might undermine the churches traditional Bible-based teaching on extramarital sex.

Reverend LEWIS: We don't want to encourage it in no way, form, fashion at all. 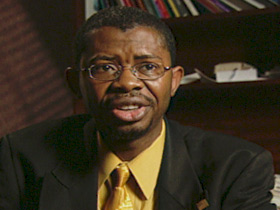 VALENTE: Dr. Hamza Brimah, a Nigerian-born physician, is the only AIDS specialist for a nine-county area of the Delta.

Dr. HAMZA BRIMAH (AIDS Specialist): We have some of the worst poverty in the United States. I've been on record as describing the Delta as being very similar to Africa in terms of the illiteracy, the lack of education.

There's really nothing to do here. So when young people get bored and have nothing to do and go out and have a few drinks, then what do you find next? Sadly, unprotected sex is the next thing that happens.

VALENTE: Dr. Brimah says that young women, with few means of support, will often enter into sexual relationships with older men in the hope of receiving even a small amount of financial help. He recalls what one female patient told him.

Dr. BRIMAH: She said, "No honey, no money." The exchange of sex is the only essential that unfortunately some younger women are left with in order to be able to obtain some money for, you know, the daily essentials of living.

VALENTE: Easha too became involved with an older man, despite her mother's warnings. 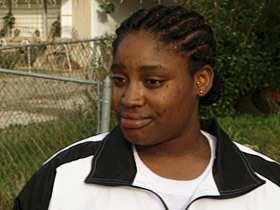 VALENTE: Because of misinformation about how HIV spreads and fear of getting it, Easha and others who contract the virus are often shunned, even by their own churches.

(to Ms. Roney): Has anyone from the church come out to you, extended their hand to you?

Ms. RONEY: Well, not extended their hand but their prayer. From my church -- only one.

Reverend LEWIS: Many people feel that that is a subject that maybe ought to be left out of the church, left in the social community to get it out, when in fact, it is one of our responsibilities as well.

(to parishioners): Because of the fact that this is AIDS Awareness Weekend, I want to call your attention to something that is relevant.

VALENTE: While Reverend Lewis is willing to preach about AIDS from the pulpit, few churches are willing to go as far as this one in Nashville, Tennessee.

Sanders's church has taken the bold step of handing out free condoms, both at the church and in the impoverished neighborhoods his church serves. 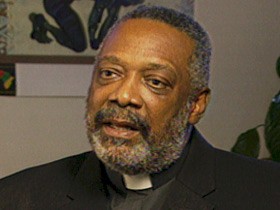 Reverend EDWIN SANDERS (Pastor, Metropolitan Interdenominational Church): Sixty-five percent of all youngsters in our junior high school have had a sexual experience. Now you can believe that the 35 percent who haven't are members of the Metropolitan Church. We have to take action.

VALENTE: Judy Jordan, whose son died of AIDS, is a member of Sanders' church who passes out condoms in the community.

Ms. JORDAN: When we started taking on the different ministries of the church that had to deal with AIDS, I kind of jumped on the bandwagon. 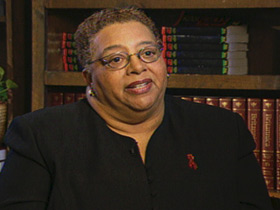 We still have in the African-American community people that are afraid, people that still want to hold and -- "It's not going to happen to me." And well, "I don't need that service. I don't need the service -- I'm not HIV-positive.'

VALENTE: In a more controversial move, Sanders's church also passes out free needles to prevent the spread of AIDS among intravenous drug users -- a program Sanders refers to as "harm reduction."

VALENTE: Norma Coleman is someone Sanders's church helped get off drugs. She still recalls with anguish how many in her previous congregation rejected her because she is HIV positive.

Ms. COLEMAN: When I revealed to them that I had been tested positive, it was like "Oh!" You know, like they had touched a hot stove or something. They didn't want to hug no more, you know?

VALENTE: But even some of Metropolitan's most active members question the church's decision to hand out needles.

LADY CORDER-CHAPMAN (Parishioner, Metropolitan Interdenominational Church): I'm opposed to needles because you know -- clean, dirty, or otherwise -- 'cause I don't think that's the answer. I think the answer has to be found in Jesus Christ. And you pray to Him and He gives you strength to do anything.

VALENTE (to Reverend Sanders): How do you walk that fine line between giving out the condoms and the needles for serious health reasons and not encouraging further risky behavior?

Reverend SANDERS: Well, we talk about our harm reduction initiatives as a bridge to treatment. Obviously you're never gonna be effective at helping people to overcome the impact of addiction unless you somehow develop rapport. I simply meet you on the street and talk about sharing with you some-some tools that might help you to be safer and less vulnerable to sexually transmitted disease.

If they won't be abstinent, then what else works? And therefore, if condoms will reduce the risk, then condoms should be included in the messages that are given out to individuals.

VALENTE: Many pastors say it is hard enough to talk about sex in many African-American churches, let alone condoms. 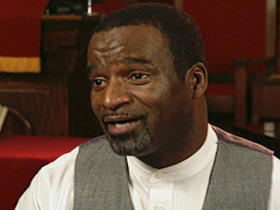 Reverend LEWIS: Passing out condoms in the religious community, especially in the black community, would seem to send the message, -- the wrong message.

Reverend SANDERS: It's important not just to talk about these issues in the context of the educational program or the special forums. It's important for it to become a part of what happens on Sunday morning.

VALENTE: Despite growing attention from churches, HIV cases are piling up so fast in the South that help will have to come from outside the region.

Dr. BRIMAH: I want to remain optimistic that in light of the bleak circumstances that we find ourselves living with here in the Delta, maybe somebody will hear our cry.

ABERNETHY: Easha and the other HIV-positive women in that story are being treated, through government programs. The outside help Dr. Brimah wants is to combat such contributors to the problem as poverty, hopelessness, and misinformation.

Should a pastor offer people any counseling on sex other than to maintain abstinence outside of marriage? Does saying anything about safe sex seem to condone behavior the Bible forbids? It’s a real issue in the deep South, especially in black churches, and especially regarding women.