BOB ABERNETHY, anchor: As speculation continued to swirl about the future of Boston Cardinal Bernard Law, Roman Catholics in the U.S. — and around the world — are assessing this week’s extraordinary Vatican meeting on the sexual abuse crisis in the American church. 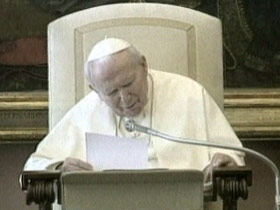 Twelve U.S. cardinals and two bishops joined Pope John Paul II and other Vatican officials for two days of discussions about the problem and possible solutions. John Paul told the group there is no place in the priesthood for those who harm the young. At the end of the meeting, U.S. officials released what they called the “skeletal outlines” of a new national policy to dismiss sexually abusive priests. The cardinals recommended a special process to defrock priests guilty of “the serial, predatory sexual abuse of minors.” They did not endorse a “zero-tolerance” policy for all past offenders, although some said that may still come. The specifics of the new policy must be worked out at the U.S. Bishops’ meeting in June and ultimately approved by the Vatican.

Here at home, some experts said the meeting was unusually frank and open — for the Vatican. But representatives of victims’ groups criticized the gathering for not going far enough. Kim Lawton has more on the meeting. 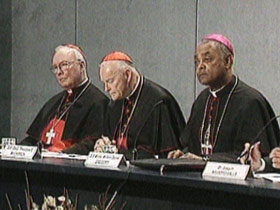 KIM LAWTON: Joining me is John Allen, Vatican correspondent for the NATIONAL CATHOLIC REPORTER. John, the cardinals left a lot of work still to be done by the bishops in the June meeting. How much debate are you expecting at that meeting?

JOHN ALLEN: We’re expecting a lot of debate and a lot of controversy. This summit painted in very broad strokes, agreeing in broad terms to a zero-tolerance policy, for example, but leaving a lot of the details to be worked out in June.

Another interesting thing that will create debate is that they took sides in what has been the sort of competing ways of explaining this crisis. Liberal Catholics have explained it in terms of mandatory celibacy and the ban on women’s ordination and the whole understanding of sexuality. Conservatives have explained it in terms of doctrinal dissent and tolerance of a homosexual subculture in the priesthood. The summit essentially ratified that second view, and that too, I’m sure, will generate debate when the bishops get together.

LAWTON: Was this meeting a matter of the Vatican telling the cardinals, “Go home and figure out a solution,” or did the Vatican officials really tell the cardinals what solutions they need to take? 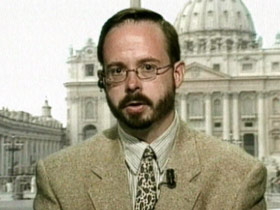 ALLEN: Well, I think it’s a little from column A and a little from column B. The Vatican has taken the position that this has to be fixed at the local level, and I think a lot of what happened was the Americans bringing their ideas. On the other hand, the Vatican also understands that whatever the American bishops come up with will be imitated all over the world and certainly wanted to get their two cents in. So what I think you had here was a give and take.

LAWTON: And very briefly, what do you see about the role of the laity in light of all this crisis?

ALLEN: Well, I think the cardinals and bishops all talked extensively about bringing the laity much more into decisions on governance and personnel, but it’s striking that in the final documents that were released this week, there was no mention of that point. The cardinals at a press conference called that an editing mistake, but I’m sure that’ll rub some Catholic laity in the States the wrong way.

LAWTON: Do you think they’re expecting to have a greater role?

ALLEN: Well, yeah, I think what has happened is this story has shifted from being just a sex-abuse story to being an accountability story, and I think a lot of ordinary, Mass-going Catholics think one of the ways to fix the accountability problems is to bring the people, that is the laity, more into the decision-making process.

LAWTON: All right. John Allen of the NATIONAL CATHOLIC REPORTER. Thank you.