LUCKY SEVERSON: Every year the University of North Carolina (UNC) at Chapel Hill assigns a summer reading book for its incoming freshmen. This year that book was called APPROACHING THE QUR'AN: THE EARLY REVELATIONS, and it's generated a lot of controversy both within the state and outside of it. Deryl Davis was on campus this week as the freshmen arrived to discuss their reading and the debate around it.

DERYL DAVIS: In some ways, it looked like the beginning of every other school year in Chapel Hill. Students in shorts and sandals, protesters and preachers outside the dining hall, and another exuberant rally in the pit. But this week, the difference was obvious.

DAVIS: UNC Islam scholar Carl Ernst says the University asked him to suggest a book that would teach some of the faith's basic ideas. 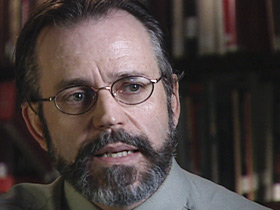 Dr. CARL ERNST (Islamic Studies, UNC-Chapel Hill): This book presents the Koran the way it is studied by beginners who approach it. It consists of short and very easily encountered suras at the end of the Koran and they have a powerful language, they illustrate central themes.

DAVIS: Alumnus Terry Moffitt is a plaintiff in a lawsuit against the University organized by a conservative Christian group. He believes the reading assignment promoted Islam and that the book gives an incomplete account of the faith.

TERRY MOFFITT: The assignment of this book as mandatory reading did represent proselytizing.

MICHAEL SELLS (Editor, APPROACHING THE QU'RAN): If I were attempting to convert people to any religion I would write the kind of book that Jerry Falwell might write about Christianity. 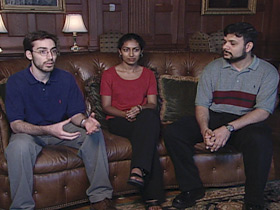 Mr. MOFFITT: It presented only 35 beautiful suras for the Koran. It didn't present anything but the positive aspects of the religion.

Mr. SELLS: The whole notion that we can generalize that religion "X" is peaceful or not peaceful is in my view an unhealthful simplification anyway.

Dr. ERNST: Islam has been an important part of history in society, and for us to pretend otherwise would be foolish.

DAVIS: Earlier this month, the University backed away from requiring all freshmen to read the controversial text, to be discussed in closed door sessions. Instead, students were given a choice: write a paper, either about the book or why they chose not to read it.

Despite a lawsuit by the Family Policy Network and moves by some state legislators to ban funding for the summer reading program, school officials say they don't regret assigning the book.

Every year the University of North Carolina at Chapel Hill assigns a summer reading book for its incoming freshmen. This year that book was called APPROACHING THE QUR’AN: THE EARLY REVELATIONS, and it’s generated a lot of controversy both within the state and outside of it.