KIM LAWTON, guest anchor: American Muslims have developed a variety of strategies to combat ignorance and prejudice against their community, from grassroots political pressure to high-profile media campaigns. But Azhar Usman has chosen a more unorthodox route — stand-up comedy. The 30-year-old Muslim comedian doesn’t pick easy targets for his jokes. In fact, he often ventures into areas where most comics would fear to tread. How does he pull it off? Judy Valente reports. 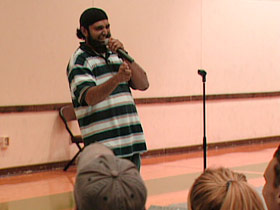 VALENTE: Before an audience of college students in Illinois, Azhar Usman jokes about being a Muslim at a U.S. airport.

AZHAR USMAN (at performance): “– Me walking into the airport? Heads turn simultaneously. Security guys are, like, “We’ve got a Muhammad at four o’clock. Ten-four. Muhammad at four. Over and out. You get the smelly one. I got the hairy one.”

There’s a fair amount of political material, and then there’s a lot of silly stuff. I mean, I’m a silly guy, and I’ve always, you know, been the class clown, and so I’m sure that comes through in my act as well.

(At performance): “Of course everybody’s real nice to me once the plane safely lands. They just lean over and smile, and they’re like, ‘Ha, ha, ha, ha (waves hi).’ I’m just waiting for a real honest passenger at the end of the flight, like, ‘Excuse me, sir, I thought you were going to kill us. Sorry about that.'” 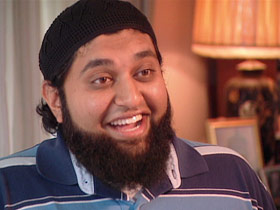 There is definitely an intent to show Americans a face of Islam, a face of Muslims that they’ve just never seen. He’s, you know, a regular guy, he’s laughing, he’s telling jokes.

JUDY VALENTE: When Azhar Usman is on stage, he says he’s doing more than just telling jokes. He’s waging peace by promoting a better understanding of Muslims, using humor as his vehicle.

UNIDENTIFIED WOMAN: Not knowing any Muslims personally, I’m glad to find him. I think it’s a good representation, and I think he’s funny with an open mind, and it’s a good way to represent his community — through comedy. 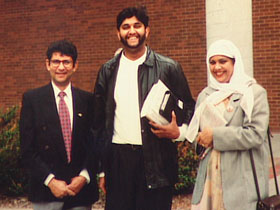 Mr. USMAN: You never want to walk into, you know, an upper-middle-class, white neighborhood at an open mike and do the following joke, which is: “People come up to me all the time and they be, like, you know, ‘What does the Qur’an say about terrorism?’ It’s like, gee, what does the Bible say about genocide?” Dead silence, you know.

VALENTE: Usman’s parents emigrated from India. He grew up in a Chicago suburb, which at the time was mostly Jewish.

(Preparing for performance): — and it will be just a list of key words to remind me of the bits that I want to do — 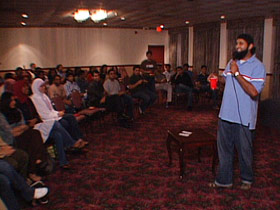 VALENTE: In a St. Louis hotel room, he prepares for another night’s performance, this time before an audience of Muslims. Usman had practiced law for three years before becoming a full-time stand-up comedian.

Mr. USMAN (at performance): Thank you for that kind introduction. That I wrote.

VALENTE: Here Usman is doing what he likes best, holding up a mirror to American Muslims and inviting them to laugh — at themselves. The audience, most of whom showed up late, are Indian and Pakistani.

Mr. USMAN (at performance): What’s wrong with us? We can never be on time, and especially because we speed all the time. We’re the fastest drivers out there. How can you speed everywhere and be late to everything?

VALENTE: He’s not afraid to touch on sensitive areas, like the separation of the sexes in Islamic tradition. 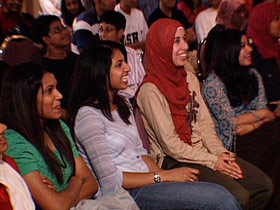 Mr. USMAN (at performance): This weird hypocrisy that emerges among Muslim men and women — like when they’re just in their normal lives, and they go to work and to school, whatever, pretty normal, right? Okay, he’s at work all week, you know, he says, “Hey, what’s going on Jennifer — high five. Come over here and give me a hug, gimme here.” Then he walks into the mosque, he walks into the Muslim mosque, he says, “Get away from me sister, get away, get away, you stupid!!”

UNIDENTIFIED MAN: There’s plenty of grief around the Muslim world, and it’s kind of nice that we can sit back for awhile and laugh at some of the instances that he brought up.

Mr. USMAN (at prayer service): I try to be a practicing Muslim. I respect the tradition of Islam, but at the same time I recognize and understand and appreciate that we’ve living in an unprecedented reality, which is Islam in the modern world. If you could imagine for a moment a very vibrant, active and dynamic American Muslim community that is at once utterly Islamic, but at the same time is utterly American and is as much a part of the fabric of America as any other community — that community can make an incredible contribution toward lasting peace and hopefully bridging a divide that is becoming more and more dangerous with every passing day. 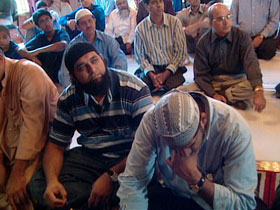 VALENTE: How do you make a joke out of war or bloodshed?

Mr. USMAN: I don’t think you’re making a joke out of war or bloodshed. I think that the joke is about human imperfection and stupidity and human arrogance and, you know, the fact that we’re living in a world where people think they can create peace by killing people. That’s funny. I mean, that’s inherently ridiculous.

VALENTE: In spite of all that, Usman tries to keep his act inherently funny.

Mr. USMAN (performing comedy): I don’t know where they find these people, especially the callers on the talk shows: “Yeah, hi, my name is Billy Bob, I’m calling from Arkansas. I just want to say that all them Muslims, and all the Islams, all them Pakistanians, and Afghanistanians, and all them Iraqistanians — they should just go back to Africa!”

VALENTE: For RELIGION & ETHICS NEWSWEEKLY, this is Judy Valente in St. Louis.