BOB ABERNETHY, anchor: Finally, as people of faith learn more about each other’s religions and wrestle with inter-religious differences, a visit to a Hindu temple where worshippers are accustomed to seeing many forms of one god. Deryl Davis reports.

DERYL DAVIS: Some things are still done the old way in one of the world’s most ancient religions — like the fire ceremony, offering gifts to divinity.

And the ritual preparation, bathing and feeding of numerous deities — several times a day.

Hinduism and its rituals go back thousands of years. Now, one of the world’s oldest religions can be seen in the New World.

Like this temple outside Washington, D.C., with its 56-foot tower, or Rajagopuram. It’s built, as are all Hindu temples, in the shape of a reclining human being. 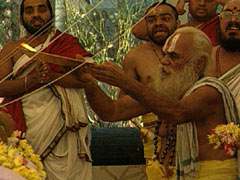 Dr. SIVA SUBRAMANIAN (Sri Siva Vishnu Temple): To us, the temple itself is God. It is as though God is in a lying-down form. And the feet represent the front towers, or the Rajagopuram.

DAVIS: But Sri Siva Vishnu is different from most Hindu temples. It is dedicated to two major gods, Siva and Vishnu, who represent rival Hindu traditions. Dr. Siva Subramanian is one of the temple’s founders.

Dr. SUBRAMANIAN: It is not common in India to find a united Siva and Vishnu temple under one roof. And so, one of the things that has been accomplished here in Sri Siva Vishnu temple in Maryland is to bring the concept of unity in this diversity here.

DAVIS: One side of the tower depicts Vishnu, preserver of life, and his many forms. On the other side are the forms of Siva, destroyer and re-creator. At the top of the tower, both gods become one — illustrating what worshippers here say is their religion’s fundamental monotheism.

Dr. SUBRAMANIAN: Hinduism believes in one god, called Brahma, and all the gods and goddesses are reflections of this one god.

DAVIS: Many of these “reflections” illustrate human ideas or attributes. Ganesha is the remover of obstacles. Dancing Shiva represents the endless and recurring cycle of time, part of the Hindu concept of reincarnation.

Many Hindus worship more than one “personal deity.” Salvia Giridhar says this helps her see the divine in everything. 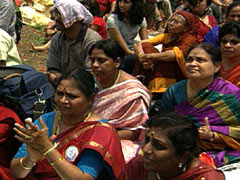 SALVIA GIRIDHAR (Hindu Devotee): If I can look at the books and look at people, look at money, look at trees, and look at animals in the form of lords and gods and goddesses, it helps me to realize that God is all around me, whether it’s man, woman, Christian, Muslim, Hindu.

MATOIN (Hindu Devotee): The different gods are specifically set up for the purpose of identifying with different cultures, different ethnicities, different groups of people.

DAVIS: With its altars to many different deities, Sri Siva Vishnu temple has become a meeting place for American Hindus of all traditions. And with no weekly services or set liturgy, adherents are free to worship when and how they choose.

MATOIN: We give everybody an opportunity to see God the way you like it, or like God.

DAVIS: Dr. Siva Subramanian says that idea extends to other religions too.

Dr. SUBRAMANIAN: We believe that all religions are different paths to the same god, but also within Hinduism there are multiple paths to reach God.

DAVIS: Hindus here say when they escape the cycle of reincarnation, there’ll be no need for words, chants, and outer forms of worship. But until then, they’ll keep their doors, like their altars, open.

THE HINDU TEMPLE: AN INTRODUCTION TO ITS MEANING AND FORMS by George Michell GODS OF FLESH, GODS OF STONE: THE EMBODIMENT OF DIVINITY IN INDIA by Joann P. Waghorne and Norman Cutler with Vasudha Narayaran THE HINDU TEMPLE by Alain Danielou

“Ashes to Go” on Ash Wednesday