BOB ABERNETHY, host: In Washington, D.C., four miles from the Capitol, on a 40-acre hilltop, there is a massive Franciscan monastery with a unique mission. Its official name is the Franciscan Monastery of the Holy Land, and its story begins in what many Christians still call the Holy Land. Our correspondent is Bill Baker.

BILL BAKER, correspondent: Of all the tourists who go to Israel and its surroundings each year, it’s estimated that more than half of them are Christian pilgrims, there to visit the holiest sites of the Christian story, among them, according to the New Testament, Galilee, where Jesus spent most of his life; the garden of Gethsemane, where the Gospels say Jesus prayed the night before he was crucified; and the Church of the Holy Sepulchre, above what is venerated as Jesus’s tomb. 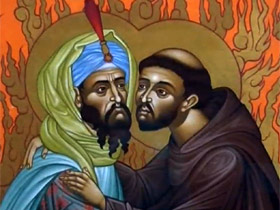 In the 13th Century, during the 5th Crusade, another traveler to the Holy Land was the man who became Saint Francis. He went to Egypt to try to make peace between the Christians and the Muslims.

Later, in Francis’s honor, Pope Clement the 6th made the order Francis founded, the Franciscans, the official guardians of the holy sites. With others, the Franciscans have been doing that ever since...

TOURIST: And I come here, and I feel God so close to me.

BAKER: ...at 54 Holy Land shrines and sanctuaries. Along with their caretaking and other projects, the Holy Land Franciscans also try to promote interfaith understanding.

FATHER ANGELO: I have befriended Muslims and Jews, Israelis, even atheists. We have a lot of atheists running around here. Makes no difference anymore. What is important is that you care for them.

BAKER: There are now nearly 400 Franciscan friars and nuns in and around Israel. They run a school in Jericho where Muslim students are taught Islam and Christian students learn Christianity. In the Old City of Jerusalem they are renovating and building affordable housing. 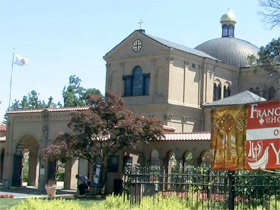 Back in the U.S., 100 years ago, a Franciscan friar thought too many Americans who wanted to visit the Holy Land could not afford to do so, so he led a successful campaign to build in Washington a monastery and, around it, exact replicas of the holiest Christian sites in the Middle East—the Tomb of the Holy Sepulchre and the stone of the anointing. Bethlehem, the birthplace of Jesus and scenes of the Crucifixion.

CARDINAL THEODORE McCARRICK (Archbishop Emeritus of Washington, DC): It reminds people of what is present thousands of miles away and recreates it for them.

FATHER JAMES GARDINER: We call it an oasis of peace and it really is.

BAKER: To support the work of the Franciscans, here and in the Holy Land, a special collection is taken every Good Friday in every Catholic parish in the country. It's required by the Pope. The collection brings in each year about $12 million, increasing a little each year. About 2,000 people visit the replicas each month.

For Religion & Ethics NewsWeekly, this is Bill Baker at the Franciscan Monastery of the Holy Land in Washington.

Every Good Friday, in every Catholic parish in the country, a special collection is taken up for the Franciscans of the Holy Land. Ever since the 14th century, the Franciscans have been assigned the task of caring for the holiest sites of Christianity in and around Israel—54 shrines and sanctuaries in total. The Franciscans have also created a monastery in Washington, DC where tourists can visit exact replicas of the most revered Holy Land sites. “We call it an oasis of peace, and it really is,” says the monastery’s Father James Gardiner.

Where Was Jesus Buried?

Letters from Assisi: The Pope and the Saint