BOB ABERNETHY: Health care in this country is a big problem for the poor — not only because they often can’t afford it. Sometimes it just isn’t there. This is especially true in rural areas, which have a hard time attracting doctors. 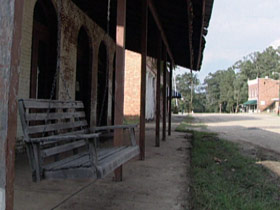 Correspondent Judy Valente found a doctor in rural Alabama whose practice is an essential part of her religious calling:

JUDY VALENTE: A buzzard stands guard atop a dying tree in tiny Pine Apple, Alabama: population 343 and falling. A town where living conditions often reflect a bygone era. All but two businesses are boarded up now. A tree grows through the roof of this abandoned dry goods store. And on some days, more dogs than people frequent the town’s main street.

Most people here live in houses along dirt roads like these. Some still get their water from spigots in their front yard. More than 90 percent of the people live below the poverty level. For most, the only work available is low-paying, low-skill jobs. 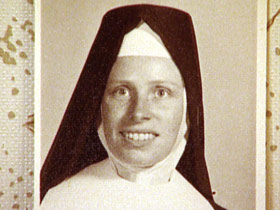 Health care here isn’t a right, it’s a luxury. But one woman has become a literal lifeline for the people of Pine Apple and the rest of rural Wilcox County.

Dr. Roseanne Cook is one of only three doctors serving Wilcox County’s 14,000 residents. She came here in 1986 after graduating from medical school at age 44. But medicine is not her only line of work.

Dr. ROSEANNE COOK: I was praying one evening and it just seemed like there was something the Lord wanted me to do, something with my life, more than I was doing.

VALENTE: Dr. Cook had planned to become a medical missionary in a remote, poverty-stricken area overseas, little knowing her mission would take her to a remote area [here] with tremendous needs. 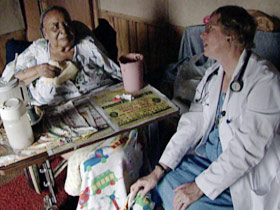 A colleague, Sister Jane Kelly, was already working at the Pine Apple Clinic as a nurse practitioner. She warned Dr. Cook it wouldn’t be easy, but that hardly prepared Sister Roseanne, as she is also known, for the problems she would find.

Dr. COOK: We have people — you know– 35-year-olds with strokes that cripple them for life. We see people who have had broken bones that were not set and end up with a crooked arm or leg. I had one man come in, he had put cobwebs into a laceration on his hand in order to stop the bleeding.

VALENTE: Eighty percent of the patients Dr. Cook sees have no insurance, and many suffer from a multitude of ailments, like 72-year-old Ethel Lee Williams. 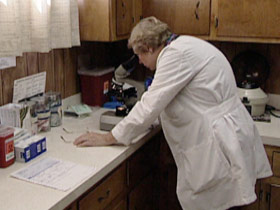 As with many of her patients, Dr. Cook provides Mrs. Williams with free samples of medication because she can’t afford to buy medicine.

Because there are so few physicians, Dr. Cook spends at least one night a week on call for the emergency room at the area’s sole hospital. By necessity, she often performs procedures that in other places, a specialist would do.

Dr. COOK: We set uncomplicated fractures and put casts on, do skin biopsies, sometimes remove cysts. We don’t have a pediatrician on hand so we take care of children.

VALENTE: She says the problem isn’t a nationwide shortage of doctors, but a “maldistribution” of doctors. Large cities and suburban areas enjoy an oversupply. Rural areas and poor inner-city neighborhoods are underserved. 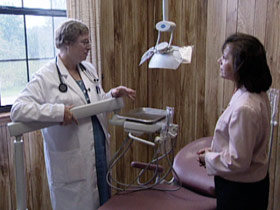 Dr. COOK: Most doctors want to be in a larger metropolitan area where there are a lot of colleagues that they can call on for consults, for backup. They’re just not interested in living out in the country where you might have three restaurants in town.

VALENTE: There’s a severe shortage of medical technicians as well.

Dr. COOK: We have this wonderful dental equipment that is only about two years old — two well-equipped dental rooms and we have no dentist to provide care for our patients. Many of them, in fact probably most of them, are in need of rescue dental care, much less repair dental care.

VALENTE: Dr. Fitzhugh Mullan, a Washington, D.C. pediatrician and medical writer, has studied the shortage of doctors for the rural and urban poor.

Dr. FITZHUGH MULLAN (Pediatrician): The whole set of problems associated with the distribution of doctors in America is troublesome and not getting better, some would argue getting worse. What we need to do is design a system of care that has the kinds of incentives in it and the kind of strategies in it that will keep and bring doctors and other providers to rural areas. 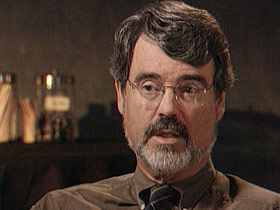 VALENTE In Pine Apple, Dr. Cook is a well-known and well-loved figure. But earlier this year, she narrowly escaped being murdered during a roadside robbery.

Dr. COOK: Then threw me in the trunk here and said, “You’re dead,” and started shooting and so one bullet went here, here, and here, and another bullet went in here. And amazingly they all missed you. They all missed me except one little grazed me right across the cheek here. But the rest missed me, and I take that as an act of God that I’m here to talk about it.

VALENTE: It’s often a lonely life for Dr. Cook, who shares a small home with her two dogs.

VALENTE: Is your Catholicism ever in conflict with your medical work?

Dr. COOK: We don’t advocate abortion. We do have a family planning program, and we don’t impose lack of contraception on our patients by any means. I don’t think most of our patients really know what a Catholic sister is, to tell the truth. They know that we care very much about them. 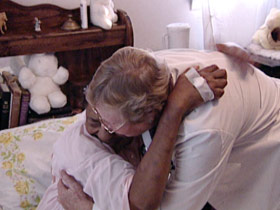 JOHN YOUNG: She’s sweet, she’s been good to my mama that lives right up the road here, and she’s always been just as good as she could to them.

VALENTE: And the patients keep arriving. Like this young mother, who came from 50 miles away because she heard Dr. Cook sees all patients regardless of their ability to pay.

Dr. COOK: Well, I think they know we will help them no matter what. And I think they experience a loving care. They know that they’re not just another client and that we’re not just a provider, and that there’s really a doctor-patient relationship that’s established, and that means a lot to people.

VALENTE: Dr. Cook doesn’t know what will happen to her patients when she has to retire. To find a new doctor, she says, they’ll have to pray hard.