BOB ABERNETHY (anchor): This week, Muslims around the world began celebrating Ramadan, the holy month of prayer and fasting. During Ramadan, adult Muslims are expected to fast and abstain from sex during daylight hours. President Bush sent Ramadan greetings to Muslims and, on Thursday evening, held a special fast-breaking meal at the White House for American Muslim leaders and ambassadors from Islamic nations. Ramadan continues through early December. 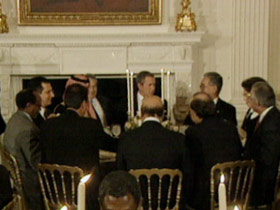 Fasting during Ramadan is one of the five so-called pillars of Islam, an obligation of Muslims worldwide.

But, how to know when Ramadan begins? Muslims use a lunar calendar, and Ramadan begins with the new moon. But for devout Muslims, it’s not enough to calculate mathematically when the crescent moon rises. It has to be seen. This week, Kim Lawton watched some American Muslims as they watched for the Ramadan moon.

KIM LAWTON: It’s Tuesday, November 5, just before sunset in Indiana. At the headquarters of the Islamic Society of North America, the phones are ringing off the hook. Muslims are wondering whether anyone has seen the new moon.

UNIDENTIFIED CALLER #1: Is there any news for the Moon tonight?

OPERATOR: No news until now. So you’re welcome to call back after 9. 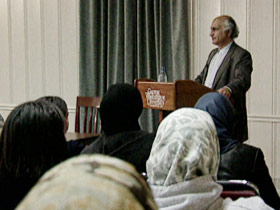 Dr. IMAD-AD-DEAN AHMAD (Minaret of Freedom Institute): The Islamic calendar is a strict lunar calendar. The result is that every year, the dates on the Muslim calendar creep up by approximately eleven days, compared to the solar calendar. Ramadan is the ninth month of the Muslim calendar, and Muslims will go out to look for the new moon to determine when the month will begin.

LAWTON: It’s a process that combines science and technology with religious tradition. The Qur’an teaches Muslims to study the heavens — and specifically the Moon — to mark time. Over the centuries, Islamic scholars made numerous contributions to the science of astronomy. Today, scientists can calculate where and when the new crescent moon may be most visible, but Islamic scholars say the actual sighting is still necessary.

Dr. AHMAD (lecturing): It’s going to be challenging to see the new moon from this spot on the Earth.

LAWTON: Tonight Muslim astronomer Imad-Ad-Dean Ahmad is giving some Moon-sighting advice to the Muslim Student Association at George Washington University. The accepted practice for Moon sighting varies from country to country. Because of the Earth’s size and curvature, Ahmad says the new moon may be seen on different days in different places. That means Ramadan and its month-long fasting may begin on different days as well. 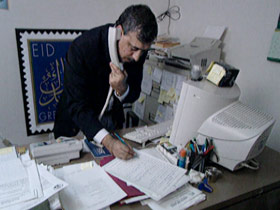 Here in the U.S., the process is overseen by the Islamic Society of North America — ISNA. Beginning on the day the new moon is expected to be seen, ISNA telephone operators stand by to take in reports of any sightings.

UNIDENTIFIED CALLER #2: Hey, is the Moon there, the Ramadan?

OPERATOR: No, they haven’t sighted the Moon yet.

LAWTON: Although he advocates scientific calculations, Dr. Ahmad still encourages Muslims to go out and look.

Dr. AHMAD (lecturing): I think it’s a great tribute to our heritage, not just our spiritual heritage, but our intellectual heritage. We’ve got to reignite our intellectual curiosity, our critical thinking. Not just accept, “Oh, my cousin in Cairo says they saw the moon, so I guess it must be there.” Nah, go ahead and look for it yourself! 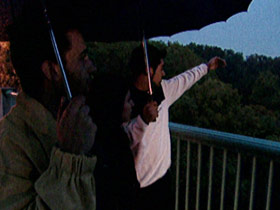 LAWTON: On a rainy Washington night just after sunset, these three students took his advice. They headed to a good vantage point, hoping for a break in the weather. They knew it wasn’t likely, but said they wanted to carry on the tradition of their faith.

RIKA PRODHAN (Student): The significance of the Moon and how it looks during Ramadan is very important to the religion itself and to understand your religion, to appreciate it, to cultivate it, especially in America.

Dr. AHMAD: The tradition is, if it’s cloudy, you go ahead and complete a month of 30 days. However, nowadays, with high-speed communication, a place that is cloudy can always get a report from a place that isn’t cloudy.

LAWTON: Any Muslim from the continental U.S. or Canada who sees the new moon calls the ISNA hotline to report the details. This year, the first reports come from Muslims in Florida. 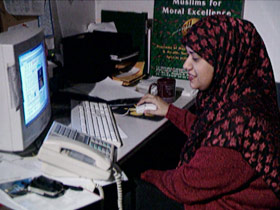 OPERATOR: What time was the sunset?

OPERATOR: And the place where you are, like which part of Miami?

ISNA WORKER: We have a report from Florida.

LAWTON: ISNA Secretary General Sayyid Sayeed then convenes a conference call of experts to discuss whether the reported sightings are scientifically and religiously legitimate.

SAYYID SAYEED (ISNA Secretary General): We are very happy to have you with us.

UNIDENTIFIED CALLER #3: I think in view of the evidence that we should declare that Ramadan begins tomorrow.

LAWTON: Once it’s determined the reports are valid, the group proclaims that Ramadan will begin the following dawn.

LAWTON: ISNA staff members get the word out, through a telephone recording, mass e-mails, and a Web site announcement. Most American Muslims follow the ISNA proclamation, although some immigrants still follow their home country’s determination. Some believe all the world’s Muslims should begin Ramadan on the same day. Others believe scientific calculations, rather than actual sightings, should be used. But all Muslims agree the arrival of the new moon heralds the holiest month of their year.