BOB ABERNETHY, anchor: Ever since September 11, Americans have been trying to understand Islam. Is there something about the religion itself that drove the terrorists? Or had a small, violent minority that despised the modern West hijacked Islam to justify its politics?

Most scholars — and President Bush — insisted that the new enemy was not Islam as a whole but a radical extreme wing of so-called Islamists. But recently, one after another, prominent evangelical Christians have been condemning all Islam, the Qur’an, its interpretations (the Hadith), and the Prophet Muhammad. Is that hate speech? Is it dangerous? Is there any truth to it? Lucky Severson reports. 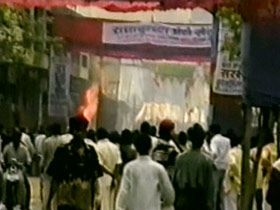 LUCKY SEVERSON: In October in Solapar, India, what started as a protest against the Reverend Jerry Falwell turned into a deadly riot that killed eight and injured 90. The evangelist had called Muhammad — the founder of Islam — a terrorist. Critics say Falwell’s remarks create hate and fear.

JOHN ESPOSITO (Professor of Islam, Georgetown University): It perpetuates this theology of hate, which is very dangerous. They are not violent people. But their level of intolerance can in fact feed violent actions.

SEVERSON: Reverend Falwell later retracted his remark, but Georgetown professor John Esposito, an expert on Islam, says the damage had already been done.

Professor ESPOSITO: America increasingly has been viewed as waging a war against the Muslim world. That gets played internationally and reinforces the perception overseas that the Bush administration must be waging this kind of war because Mr. Bush, the attorney general, many leading members of Congress are born-again Christians and members of the Christian Right, and these ministers are spokespersons for the Christian Right. 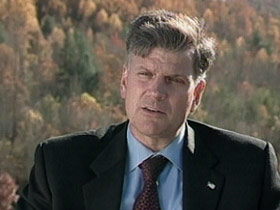 Reverend FRANKLIN GRAHAM (Evangelist): The God of Islam is not the same God of the Christian or the Judeo-Christian faith. It is a different God, and I believe a very evil and a very wicked religion.

SEVERSON: The Reverend Moody Adams travels from his home in Louisiana to churches as far away as Africa. The evangelist preaches not so much about the Bible but the Qur’an. 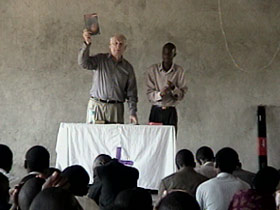 SEVERSON: Hussein Ibish heads the American Arab Anti-Discrimination Committee. And he is very worried about what he sees as the spread of hatred and suspicion.

HUSSEIN IBISH (American Arab Anti-Discrimination Committee): The kind of defamation we see coming from the religious Right and other social conservatives really has produced a climate of anxiety and suspicion that makes people very vulnerable and feel exposed.

SEVERSON: But it is no longer only Christian conservatives who are speaking out. Robert Spencer, a Catholic writer, has just published a book called ISLAM UNVEILED. And he agrees with what the religious Right has said about Islam, but says their comments have gone too far.

ROBERT SPENCER (Author, ISLAM UNVEILED): Overstated as they were, there was a core of truth in many of them that people are overlooking because of the way they were represented. 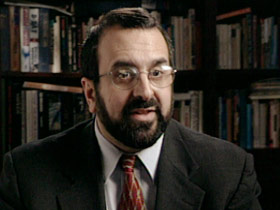 SEVERSON: The vast majority of religious leaders denounce the attacks on Islam, but still the number and volume are increasing.

Some scholars say the attacks have always been there, but 9/11 brought them out in the open. Pat Robertson, the religious broadcaster, describes Muhammad as an absolute wild-eyed fanatic — “a killer.” And then he’s invited on the Sunday talk shows to talk about it.

Prof. ESPOSITO: They get national coverage and often there is no one to respond to the fallacies of what they are saying.

Mr. IBISH: They’re getting away with saying this stuff and still being respectable.

President GEORGE BUSH: Islam as practiced by the vast majority of people is a peaceful religion.

SEVERSON: The president has spoken publicly on behalf of Islam and against hatred at least 17 times since September 11. Critics say it’s the attorney general who has dropped the ball.

Prof. ESPOSITO: If anybody ought to be saying something, it is the attorney general. It is well known that he is a member of the Christian Right. 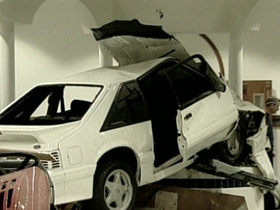 SEVERSON: According to the FBI, feelings in this country against Muslims are not settling down, they’re getting worse. The number of hate crimes reported against Muslims in 2001 increased dramatically over the previous years: from 28 to 481. Not a huge number, but a troubling trend.

Little crimes and big ones spawned by ignorance and hate. In Mesa, Arizona, two men allegedly shot and killed an Indian gas station owner because they thought he was a Muslim. In Ohio, a man crashed his car into the Islamic Center of Cleveland.

Prof. ESPOSITO: When people commit hate crimes, for example, against Muslims, and they happen to be Christian in background, one of the things you have to ask yourself is, Where does this come from? Where are they getting this sense of legitimacy?

SEVERSON: It’s hardly surprising that so many Americans are suspicious of the world’s 1.2 billion Muslims.

Mr. SPENCER: The fact that the terrorist attacks continue will make it harder and harder for people to sustain the case that this is some kind of aberration within the Islamic world.

SEVERSON: With the exception of the bombing in Oklahoma, where Muslims were instantly and wrongly suspect, in nearly every terrorist attack against the U.S. or U.S. citizens, the suspects have been Muslim. That includes the assassination of the American diplomat in Jordan, and the killers of the young American missionary shot recently in Lebanon. Hussein Ibish says it’s only a small minority of Muslims who use the Qur’an to justify terrorism. 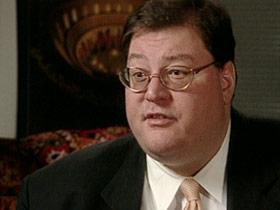 Mr. IBISH: The overwhelming majority of them are good, decent people who live decent moral lives, and that their religious faith enables them and empowers them and provides the structure through which they live good, decent, and moral lives. To miss that is to miss everything.

SEVERSON: And then there was the Miss World Contest in Nigeria, later moved to London after over 200 people were killed in rioting. It started with a newspaper reporter’s comment that Muhammad might have wanted one of the young women as a wife.

Rev. ADAMS: And that was just a light statement. But you don’t say these, because the Qur’an commands them to battle anyone that reviles or criticizes the religion, and they carried out the laws of the Qur’an to the letter.

SEVERSON: In Indonesia, authorities say the key suspect in the bombing that killed nearly 200 young people at a nightclub says he was guided not by al Qaeda but by the Qur’an.

Rev. ADAMS: It commands people to kill. Let me give you some verses. In the Qur’an 47:4, it says, “When you encounter the infidels, strike off their heads till you’ve made a great smote among them.” And again, 2:193, “Fight therefore against them until the only worship be that of Allah.”

SEVERSON: But Professor Esposito says with the Qur’an, as with other religious books, it is often in the interpretation, which can vary from person to person and from motive to motive. 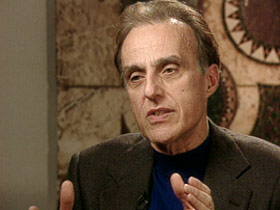 Mr. SPENCER: All I am doing is pointing out that there are many millions and millions of Muslims in the world today who take those passages that I have quoted and others like them and interpret them in a violent manner and in a manner that they consider gives them a license to commit acts of violence today.

SEVERSON: The majority of Islam’s most vocal critics in the U.S. have come from the Christian Right, and that does not surprise Hussein Ibish.

Mr. IBISH: They believe very strongly that we are in the end of times. Their current version is that it is Israel versus some group of Arabs and Muslims that will provide a flashpoint for the battle of Armageddon, the rise of the Antichrist, the Second Coming.

SEVERSON: It is unlikely that tensions between Muslims will ease anytime soon, and Robert Spencer says it is going to be necessary for more Muslim leaders to get involved.

Mr. SPENCER: There are modern Muslim elements, and certainly they are formulating new understandings of the Qur’an and the Hadith that are necessary to neutralize this kind of violence. As of yet they do not have very much influence within the Islamic world.

SEVERSON: For now, the Reverend Moody Adams feels like a voice in the wilderness, a prophet to some, a nut to others.

Rev. ADAMS: Well, I see that people like me will be put in the nut box more and more. We will be looked at as intolerant radicals. Until there are two or three more attacks like September 11.

SEVERSON: So the reverend hopes that people will get his message about the Qur’an and Islam. And Hussein Ibish is afraid they will get the message, but it will be the wrong one. For RELIGION & ETHICS NEWSWEEKLY, I’m Lucky Severson in Washington.