BOB ABERNETHY, correspondent: Now, an American woman’s study of the Quran, the sacred text of the world’s 1.6 billion Muslims. Carla Power is a journalist who used to live in Oxford, in England, where she arranged to be tutored for a year by a renowned Muslim scholar, Sheikh Mohammad Akram Nadwi. The result is Carla’s book, If the Oceans Were Ink, which is a finalist for the 2015 National Book Awards. Recently, Carla was in Washington lecturing at the State Department and talking with us at the Islamic Center of Northern Virginia. She spoke of her sheik’s total surrender to Allah and eternal life.

CARLA POWER (Author, If the Oceans Were Ink): He very much sees this world as a place he is passing through, and the really important thing is what comes afterwards. He sees himself sort of as, he said, “a slave of Allah.” This is a merciful God, and as long as one is pious and keeps God in one’s heart, there’s mercy.

ABERNETHY: Muslims say the Quran was dictated by Allah to the Prophet Muhammad over 23 years in the seventh century. Many say they weep at its classical beauty and revere its messages outlining everything needed to live Allah-centered lives. It is said to be the most recited scripture in the world. Some Muslims memorize every word of its 6,342 verses. Over the centuries, the original Quran was joined, first, by the hadith—the sayings and teachings of the Prophet—and later by vast amounts of scholarship on law and philosophy. 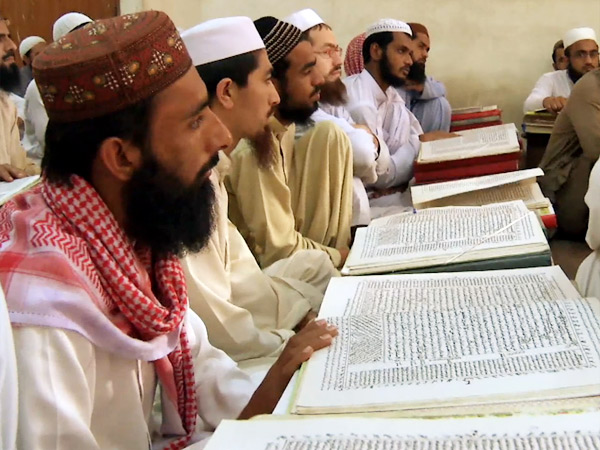 POWER: Over and over the sheik would say to me it’s all about context. I mean, you could find absolutely anything you want, and If you go looking for violence in there, and you want to rip a couple of verses from their context and claim that, that’s fine.

ABERNETHY: Carla said her sheik thinks Islam has been kidnapped by those who want to fight in its name. She cited a verse from the Quran with the words “kill the idolater.”

POWER: It’s called the Verse of the Sword, and it was a favorite of Bin Laden’s. It’s a favorite of jihadis who want to foment religious wars against non-Muslims. What often gets written out is the second part of the verse, which says, “But if they repent and do good, and give alms and pray, then let them go on their way, because Allah is merciful.”

POWER: He sees the wars that are being fought ostensibly in Islam’s name as very earthly squabbles. These are people who want power or money or control of land or resources, and Islam is a convenient mantle to wrap yourself in. Where people are arguing for an Islamic state, say, or let’s put in shariah law, he says no, we have to reform ourselves first. We have to start from the inside. 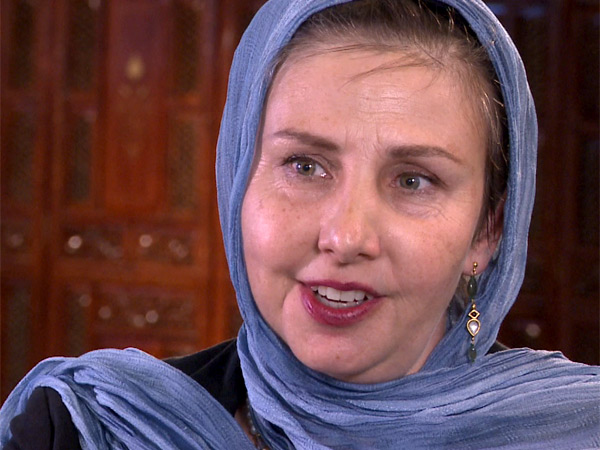 ABERNETHY: Islam’s treatment of women is also a major issue, one especially troubling for Carla, who is a strong feminist.

POWER: We had a long conversation on how and when it was legal to strike one’s wife. Then he would suddenly surprise me with his thinking on polygamy, which was fine, he said, as long as you treat your wives equally.

ABERNETHY: Carla says she also saw her sheik modify his views on some issues, such as child marriage.

POWER: Sadly, I think child marriage is still very prevalent. There are some horrible statistics in India and Yemen. Classical Islamic law has upheld the notion that a father could marry off a daughter when she is quite young.

ABERNETHY: And who runs the family?

POWER: There is a verse, 4:34, which traditionally scholars have said reads as men are in charge of women. My sheikh thought that men being in charge of women doesn’t mean they are superior over them. It means they are responsible, they have financial responsibility for the household, and they have to take care of women in that sense.

ABERNETHY: Carla says many Muslims are rediscovering the Quran.

POWER: One of the exciting things that are going on now is that people are going back to the basic texts, and they’re stripping away centuries of culture and tradition and looking for what they see at the heart of the religion, rather than what grew up around it. 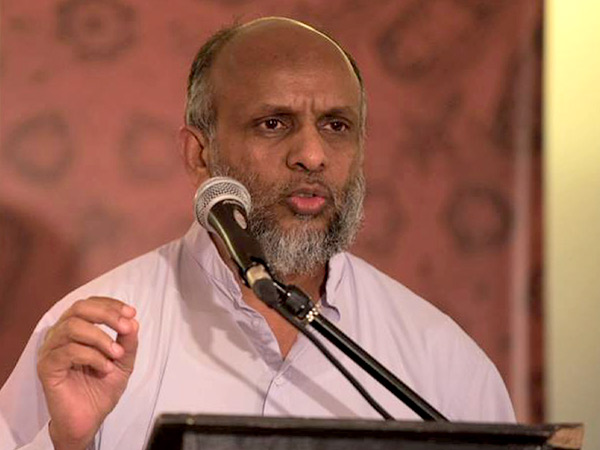 ABERNETHY: For instance, Carla’s sheik himself has made it his lifework to compile the history of 9,000 women who played dominant roles in Islam since its beginning. And Carla says Islam’s widespread practice of head coverings for women is based more on local traditions and customs than on the Quran.

POWER: There is a verse that says women should draw their cloaks around them, and there is a real sense that both men and women should be very modest. There is real debate in both translation of the Quran and interpretations of it as to what this modesty means.

ABERNETHY: I asked Carla about the sheik’s theology, beginning with what he says about suffering.

POWER: He feels that it’s part of life.

ABERNETHY: Did it weaken in any way his trust in God? 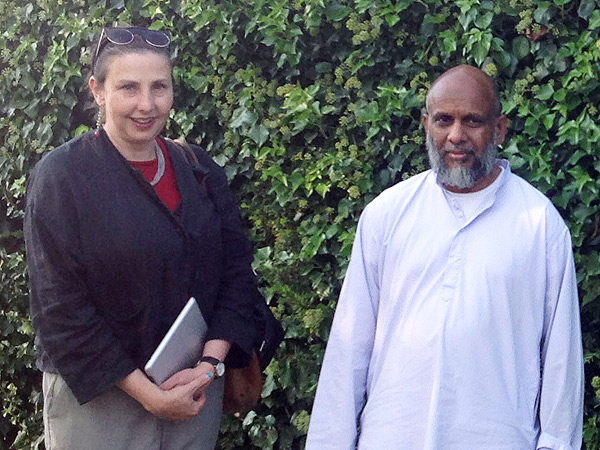 POWER: A test that one has to endure. The point was piety. For him at the center of the Quran is preparing yourself to avoid hellfire.

POWER: He never pressured me to convert. He understood—he knew my mother was Jewish, and my father was a Quaker, and I was raised secular. But I did call him, and I said, “What do you think is going to happen to me? I think I am a good person, but I can’t embrace Islam.” He was too polite to say it point blank. But yeah, yeah, he thinks I’m going to hell.

ABERNETHY: At the same time, Carla says she was deeply moved by her year of spiritual listening.

POWER: There were things that were incredibly beautiful about it and extremely moving. The sheik remained extraordinarily inspirational. To hang out with someone whose life is genuinely God-centered as opposed to self-centered—I grew up on the Sesame Street jingle that the most important person in the world is you. It was extraordinary to be with someone who really genuinely feels that everything he has is God-given.

ABERNETHY: If the Oceans Were Ink is a line from the Quran referring to Allah’s abundance. Carla hopes her story will help Muslims and everybody else understand each other better.

American writer Carla Power and madrasa-trained Sheikh Mohammad Akram Nadwi debated Islam’s holy book in search of interfaith understanding. She has written about the experience in her new book If the Oceans Were Ink: An Unlikely Friendship and a Journey to the Heart of the Quran. “People are going back to the basic texts, and they’re stripping away centuries of culture and tradition and looking for what they see at the heart of the religion,” she says.

Read an excerpt from If the Oceans Were Ink: An Unlikely Friendship and a Journey to the Heart of the Quran by Carla Power:

My year with my own sheikh and the Quran provided me with many moments of grace. I found comfort in how small I felt reading the text, as when I considered the images of the “lord if the heavens and the earth and everything in between, and Lord of all points of the sunrise.” Even as a nonbeliever, I still found myself taking refuge in the Quran classes as a clam inlet from daily life. The sheikh’s disregard for all the measurements of getting and spending was soothing. Yesterday’s close on Wall Street, the exam score or dress size, even happiness itself; all were nothing next to the fact that from God we com and to God we return. The constant reminders of one’s own puniness and powerlessness were strangely bracing. When my mother died, I remember thinking how sensible it was, the Muslim practice of saying “Inshallah,” or “God willing,” after every plan, every promise, no matter how minor, since only God can be sure whether next Wednesday’s lunch date will indeed be kept. It was a comfort, in a season of grief, to hang out with a community that honored this world’s certainties. 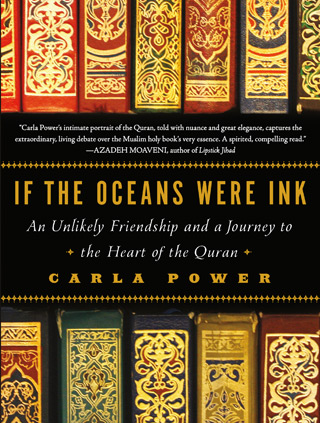 For the sheikh, existence was a circle with God at its end, beginning, and every point in between. From Allah he has come, and to Allah he will return….Everyday circled back to his God. Thirty-five times a week—and often many more—he returns to prayer. In standing, kneeling, bring his forehead to the earth, then standing again, his attention returns to his origins and destination, which are one and the same. On good days, prayer could feel like returning to “the arms of your mother, when you are a child,” he said.

When I began my Quran lessons, I assumed, with pert certainty, that I would read a book through and learn what was inside it. The first clue that I couldn’t had arrived during that first lesson. “Ah, but is it a book?” the sheikh had asked. I’d patted my paperback, clueless as to what he meant. I’d come a long way from earliest encounter with the Quran, but I still hadn’t understood that it was far more than a much-revered book. Over the course of the year, I began to see that the Quran was not merely a set of pages between two covers. Calling it a book, something one can read from beginning to end, embalms it in expectations. It was just another way of limiting it into something small: an amulet, a manifesto, an instruction guide, a political tool. In the life of a Muslim like [Sheikh] Akram, its meaning is much more diffuse. So, too, is the Quran’s reach in Muslim societies, where its words blare from mosque loudspeakers issue from radios and CDs, or hang on necks or walls. Grasping at what the Quran might be, I can only settle on the metaphor of return. It is a place to which the faithful return, again and again.
Much as they do to prayer. Scientists who have studied the postures of Muslim prayer have found they encourage calm and flexibility. Standing straight in the opening stance, they discovered, strengthens musculature. Bowing stretches out the lower back and hamstrings. The pose of sitting after prostration keeps joints mobile. Akram’s prayers have rendered him culturally supple, too, stretching his humanity in surprising ways. The act of return—to his prayer mat, to his Quran and his classical texts—has often afforded an expansion of his worldview, not a restriction of it.

When I asked the sheikh how I could deepen my understanding, his answer invariably echoed the command that Muhammad heard: “Read.” Keeping reading the Quran, he told me at our last lesson. Read it, and read it again. Return.