BOB ABERNETHY, anchor: Last week here we reported a provocative statement by Islamic scholars in Cairo. They said an attack on Iraq would be an attack on all Islam, and every Muslim would have the obligation to defend the faith. Now that war has begun, we want to explore the implications of that call — and of the war — for Muslims, Christians, and Jews.

Diane Knippers is President of the Institute on Religion and Democracy in Washington. Jack Moline is the rabbi at Agudas Achim Congregation in Alexandria, Virginia, and also Vice President-at-Large of the Interfaith Alliance. Akbar Ahmed is Chair of Islamic Studies at American University in Washington. He’s also a former Pakistani diplomat. Welcome to you all.

Dr. Ahmed, to what extent do Muslims around the world now feel that their religion has been attacked? 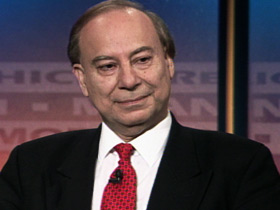 Dr. AKBAR AHMED (Chair of Islamic Studies, American University): There is a great anger and frustration in the Arab street, in the Muslim world on the whole. That’s why the governments that are pro the United States of America like Turkey, Jordan, Pakistan are still very uncomfortable about openly aligning themselves, because of the anger in the street.

DIANE KNIPPERS (President, Institute on Religion and Democracy): That is very difficult for American Christians, I think, to understand because Saddam Hussein is not our image of a good Muslim at all, so …

Dr. AHMED: You are absolutely right, Diane. He is not a good leader, or a good Muslim leader, I accept that as such. But remember that for the man in the street there is so many unresolved issues that lie heavy with them, and also that what is coming from the United States of America over the last few months — the attacks on the Prophet of Islam, the attacks on the Qur’an, the attacks on Islam are being perceived by many ordinary people as attacks on Islam, which is marginalizing the moderates, which is silencing the moderates, and very often endangering their lives.

Rabbi JACK MOLINE (Agudas Achim Congregation): American Jews often feel the same way about Israel. Even those who disagree with the policies of a particular government will very much rise to Israel’s defense when perceived as being attacked. Is there any way you can see where that connection between faith and political pride can be broken?

Dr. AHMED: Jack, the analogy is a strong one, but slightly different for the Muslim world because Israel is one nation and here you have about 55 Muslim states. So the relationship between the state and religion is a bit more blurred than it is in the example of Israel, which is, then is a symbol of Jewry, if you like, abroad.

ABERNETHY: Diane Knippers, the attacks on Islam that Dr. Ahmed was referring to came in large part from prominent evangelical Protestants. What can be done about those attacks? 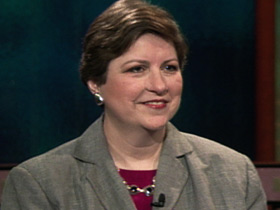 Ms. KNIPPERS: Well, I think after those attacks there was enormous furor and there were acts of violence internationally, so other evangelicals got to those leaders very quickly and told them to shut up. And what we’ve actually seen, I think, in the evangelical community — let me back up and say that most American Christians, polls show, actually support the war — but there have been very few voices that have said that, either in the buildup or even now. And it’s because American Christians do not want to make this a holy war. They don’t want to make this a religious war, so they’ve been very, very quiet about their support.

ABERNETHY: Let me turn to what’s going on within this country after the war. Dr. Ahmed, what is the feeling within Muslim communities here? Are they afraid?

Dr. AHMED: Yes, there’s a general uncertainty, general fear of a backlash. There have been some incidents, which have been recorded. And I find this a great tragedy because what is potentially America’s greatest asset, greatest ally in this war against terror — that is the American Muslim community — has not been fully involved as much as it could. And indeed, it’s been marginalized and to some extent even alienated.

Dr. AHMED: Well, I don’t doubt there would be. Members of the young generation — hotheads — people who are at this moment confused, unsure. And I really believe it’s time to reach out and try to build some bridges with them. To explain things to them.

Ms. KNIPPERS: It really is urgent. There are hotheads in all of our faiths and the fear is enormous — I mean Jews and Christians and Muslims are worried about terrorist attacks in our nation — so, more understanding, more conversation. And frankly, I think American Christians need to hear from the Muslim community — more words of disassociation with violent forces in Islam. 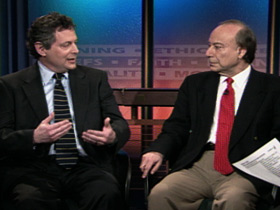 Dr. AHMED: I hear about this, Diane; people keep saying, “Why aren’t the moderates speaking up?” The fact is they are speaking up, but as you said, they need to be heard. I myself have been to the Episcopal Church, I am going again to Bishop John Chane’s organization, I am going to the Washington Hebrew Congregation shortly. So, there is that element of dialogue, but it needs to be, as you say, much more vigorous.

Rabbi MOLINE: But I understand the fear. Even the American Jews, who are probably more secure in the United States than anywhere but Israel — maybe even more so — are now hearing rumblings about their dual loyalties and concerns, even in the halls of Congress, that the Jews may be responsible for the war. So, I understand the fear of American Muslims in feeling that way as well.

ABERNETHY: The congressman you speak of [Jim Moran (D-VA-8th District)] is your congressman?

Rabbi MOLINE: He is.

Rabbi MOLINE: And my hopes are he won’t be my congressman for much longer.

ABERNETHY: But you did speak out?

Rabbi MOLINE: I spoke out, called on him to resign, and it has provoked a national debate.

Dr. AHMED: The point the rabbi has made is very relevant. I found that in Europe or in the United States of America, that Islamophobia — that is, hatred of all things Islam — is very rapidly followed by anti-Semitism. And there is a pattern. As an anthropologist I almost studied this — that immediately we saw desecrating Jewish cemeteries, trying to blow up a synagogue or throw things or abuse Jews and so on, there is a pattern to this in Europe and you will see this pattern emerging in the United States, unless we are careful. 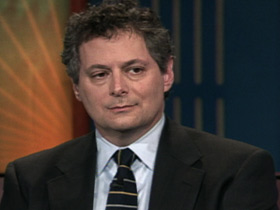 Rabbi MOLINE: A respect of differences as much as a support for civil rights and human rights for all people.

Dr. AHMED: And above all in the conceptual frame within which we have dialogue that there is a link — these links like Abraham, for instance — such a powerful symbol of a mutual shared tradition. These are very powerful symbols.

ABERNETHY: Thank you. Many thanks to Diane Knippers and to Rabbi Jack Moline and to Dr. Akbar Ahmed.