BOB ABERNETHY, anchor: Now, a look at the meaning of Holy Week and Easter through the eyes of best-selling author Frederick Buechner. Buechner is one of the most highly acclaimed modern Christian writers. He’s also an ordained minister whose works on life and faith are widely quoted in Easter sermons. Kim Lawton caught up with Buechner in the churchyard of the historic Pisgah Presbyterian Church in Lexington, Kentucky.

KIM LAWTON: During Holy Week, Christians remember the last events in the life of Jesus — the stories and teachings that form the foundation of their faith. The observances of Holy Week are ancient and familiar. Christians say the 2,000-year-old Easter themes of suffering, redemption, and hope have enduring meaning.

Author and ordained Presbyterian minister Frederick Buechner says he finds great reassurance in those beliefs, especially during a time of war and uncertainty. 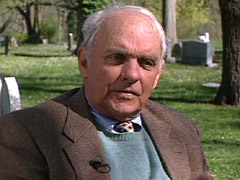 LAWTON: On the church calendar, Holy Week begins with Palm Sunday, when Christians wave palm branches as did the citizens who welcomed Jesus into Jerusalem. Buechner says this year, he was struck anew by the biblical account in Luke, which also describes Jesus as weeping because the city didn’t recognize how true peace could be attained.

Mr. BUECHNER: And I thought he could be saying that just as easily today — would that the world, the United States, knew the things that make for peace. So I thought a lot about Jesus’ tears for Jerusalem, how he would be weeping still, again, today.

LAWTON: On Maundy Thursday and Good Friday, Christians remember the betrayal, crucifixion, and death of Jesus. The services are somber and mournful. They focus on Jesus’ suffering — something Buechner says everyone can relate to. 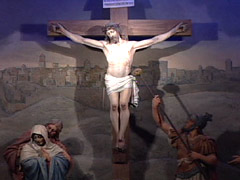 Mr. BUECHNER: Which of us has not suffered, one way or another? I mean, we’ve all had our crucifixions, where God seems to be absent and light seems to disappear and the world is dark and terrifying.

LAWTON: According to the Bible story, on the cross, just before his death, Jesus cried out, “My God, my God, why have you forsaken me?”

Mr. BUECHNER: We’ve all known our dark times. We’ve all felt abandoned by God or felt there was no such thing as God to abandon us, just the emptiness, the craziness of the world.

LAWTON: Yet the story doesn’t end there. According to Christian teaching, three days after the crucifixion, Jesus rose from the dead, forever conquering sin and death. The horror of the cross opened the way to salvation and new life for everyone.

Mr. BUECHNER: The best has come out of it, which is this nourishing current of hope and new life that still flows in spite of everything. There must be a God, how else could it happen?

LAWTON: Many Christians observe this great contrast with special services on Holy Saturday, with a late-night vigil, or in the pre-dawn of Easter morning. They gather in darkness and await the light of Easter. 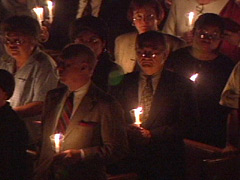 Mr. BUECHNER: Darkness symbolizes that out of which faith can arise, that which faith must somehow confront. The great opponents, if you want, of darkness and light are brought together within a space of less than a week — the darkness of the crucifixion and the blaze of the resurrection, whatever that was. Out of this comes this triumphant hope.

LAWTON: Buechner says he believes deeply in the resurrection and its continuing power — even though he can’t explain exactly what happened that Easter morning.

Mr. BUECHNER: What really matters is not so much what happened there. It’s what happens now. What happens in your life and my life. Is God making himself known in some powerful and saving way among people, even, who don’t give a hoot about God? Is this still a reality which is part of the madness and self-destructiveness and darkness of the world? That’s what really matters.

LAWTON: Which of the Easter themes have particular relevance this year, in light of current events?

Mr. BUECHNER: I’m a terrible pessimist in many ways as far as the state of the world is today. But I feel ultimately that beneath the level of all the madness and horror is this saving, life-giving, nourishing, healing, beautiful, mystery is the best word for it — that somehow an elusive, holy plan is being worked out in the affairs of the earth.

LAWTON: On Easter Sunday, in church after church, year after year, sorrow gives way to rejoicing as Christians celebrate the idea that death doesn’t have the final word. Pageantry, singing, flowers, even new clothes all symbolize the Christian belief that Jesus overcame death — and so will all who believe. It’s a victory, Christians say, that transcends time and circumstance.

Archbishop THEODORE MCCARRICK (At service): We are called to rise up above all the bad news of our time and rejoice in the good news of Easter: Jesus Christ is risen.

Mr. BUECHNER: “All shall be well, and all manner of things will be well.” That somehow remains true no matter what. That’s, I think, the message of Easter.

LAWTON: And amid war, sickness, fear, and death, it’s a message being celebrated again this year. I’m Kim Lawton reporting.