BOB ABERNETHY, anchor: Many churches encourage their young people to memorize Scripture. In the Free Methodist Church, they do it through a friendly competition called “Bible Quizzing.” This year marks the 50th anniversary of Bible Quizzing in the evangelical denomination. Last week, 123 teams from across the nation competed in the Church’s National Bible Quizzing Final Tournament. Kim Lawton takes us behind the scenes.

VOICE OF QUIZMASTER: Give the reference and quote the passage about being free…how did Jesus answer the disciples…what did John’s disciples testify…? 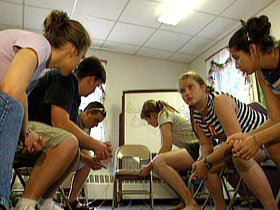 KIM LAWTON: At the Gowanda Free Methodist Church in Western New York, the questions are flying fast. This is the last practice before the National Bible Quizzing Finals.

QUIZMASTER: The Samaritan woman asked Jesus if he was greater than whom? Yolanda?

YOLANDA: “Are you greater than our father Jacob, who gave us this well and drank from it himself, as did also his sons and his flocks and herds and his sons.” Finished.

QUIZMASTER: Sorry, I can’t accept that.

LAWTON: The teams are quizzed not on Bible trivia, but on Bible memorization.

GOWANDA TEAM MEMBER: “They do not realize that it is better for one man to die than the whole nation perish.” Finished. 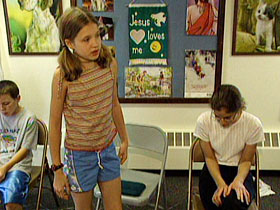 LAWTON: Competing teams from churches across the nation are assigned the same section of Scripture to study. This year, it’s the Gospel of John.

UNIDENTIFIED YOUNG GIRL: “Blessed are those who have not seen, and yet have believed.” John 20:29.

LAWTON: Each team has three quizzers and at least one alternate who face off against each other. A “Quizmaster” asks the questions. The quizzers sit on special cushions that are hooked up to a light box. They jump up to answer the question, and the light box indicates who got up first.

LAWTON: Eighteen-year-old Peter showed me how it works. 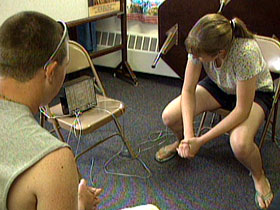 PETER: So we sit on these chairs; they got little sensors in them. You have to have enough weight on there to put the light out. Your feet can’t be touching any part of the chair, nor can your hands. So you have to sit mainly like this. Some people like to go like this, some people, it’s weird. It all depends. And you just listen, and you get ready, and you jump.

LAWTON: Every quizzer develops a jumping style for competition.

LAWTON: Are there special exercises that you do so that you get the jumping down?

PETER: No, it’s all instinct.

LAWTON: It’s also a matter of delicate timing. If you jump too soon, you have to complete the question before you can give the answer.

LAWTON: Sometimes, you’ve jumped before there’s enough information to even guess what the question might be. If you’re wrong, the other team gets a free shot at the answer. 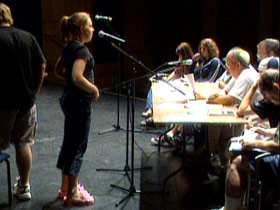 LIZ: You can’t be too late, but you definitely can’t be too early. I have a problem with jumping too early, and I don’t get to complete the question correctly, and then it goes to someone else. And it’s a simple question that I know.

LAWTON: Quizzers have only 20 seconds to answer. The correct answers are usually Bible verses. Everyone uses the New International Version of the Bible, and the answers must be given exactly word for word.

The Gowanda teams, like all the quizzers headed to Nationals, have been getting ready for a year now…

COACH (to quiz competitors): You know your work is something special.

LAWTON: …with weekly practices and regional competitions. Many say their friends at school can’t understand why they put so much into this.

AMANDA: They think it’s really weird that I would, like, memorize Scripture, and they think I have no life whatsoever. But I tell them that it’s really cool, and I’m really hoping to invite them to one of my tournaments and show them how interesting it really is. 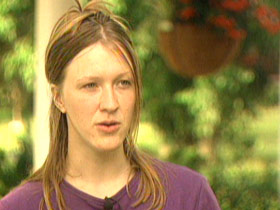 LAWTON: Fourteen-year-old Liz says she doesn’t care that other kids call her “church girl.” She says learning the Bible through quizzing has had a deep spiritual impact.

LIZ: Knowing the Scripture can change you a lot. I mean, we’re not just learning stuff like stories that Jesus told his disciples. We actually have to put it into our own lives.

LAWTON: This year, the National finals are at Roberts Wesleyan College, just outside Rochester, New York. A total of 400 quizzers are here. It’s a week of competition, and every day begins with a worship service.

NATIONALS QUIZMASTER: Question, when Jesus saw that his disciples wanted to ask him about…

LAWTON: Teams are put into divisions based by age, experience and ability. On the last day, double elimination rounds take place simultaneously all across campus. In each quiz, team captains introduce their members, and every round begins with a prayer.

YOUNG WOMAN: I just pray that we all do our best. 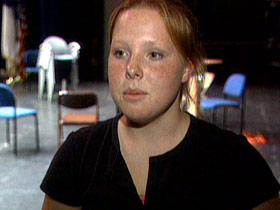 LAWTON: Tensions are high, with lots of pacing. Sixteen-year-old Ashley from Bedford, Indiana, is among the quizzers who have memorized the entire book of John — all 21 Chapters.

LAWTON (to Ashley): Quote some of the book of John for me.

LAWTON: Top competitors, such as Ashley, learn to speed-quote, so they can be sure to get their answers in during the allotted time.

ASHLEY HEAD (speaking very rapidly): “The Word became flesh and made his dwelling among us. We have seen his glory, the glory of the One and Only, who came from the Father, full of grace and truth.”

LAWTON: At quiz headquarters, engineers keep the electronics in good working order, while computer experts keep track of the statistics. Youth Pastor Eric Young is co-director of Nationals. He’s a former quizzer himself. 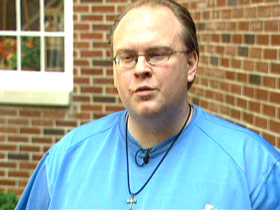 Rev. YOUNG (Co-Director, National Bible Quizzing Finals): One of the great things about the quizzing program is that we’re developing leaders for the church for the future. Certainly by studying God’s word, they have the ability to bring scripture back into situations when they could really use it. And it’s because they’ve studied it, they’ve memorized it, that they’re able to do that, and that’s what gives them their foundation for the future.

LAWTON: Many of these kids say Bible quizzing is already shaping their lives.

ASHLEY: When I try to make decisions about like, going somewhere with friends, like, a verse will pop up and I’ll be like, “Oh, I’m not supposed to do that,” and it’s really helped me make the right decisions and stay on God’s path.

AMANDA: I think it’s just awesome to fellowship with other quizzers and to get to know people and at the same time get to know Jesus more and take in his word. It’s all about him and putting it in my soul and not in my brain.

LAWTON: For the Gowanda teams, this year’s Nationals were a mixed bag. Peter and his team got eliminated early on. Liz and her team placed sixth place in their division. Ashley and Amanda’s team took second in theirs.

And Ashley, the speed-quoter from Indiana? She and her team were named the 2003 National Bible Quiz Grand Champions.