BOB ABERNETHY, anchor: The new governing council in Iraq met this week, a first step toward creating a constitution and holding elections. The council includes representatives of all the country’s major religious and regional groups.

But, on the ground, U.S. forces continue to take casualties almost every day. The U.S. commanding general in the region says supporters of Saddam Hussein are now waging an organized “guerrilla-type” war.

Meanwhile, in another audiotape purporting to be from Saddam, the speaker condemns the council and calls for a holy war against U.S. and British forces.

Anthony Shadid is a foreign correspondent for THE WASHINGTON POST who covered the war and its aftermath and is just back from Iraq.

Anthony, welcome. How widespread is the guerrilla war? 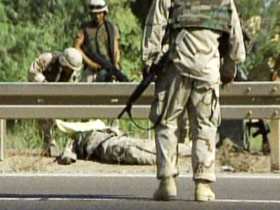 ANTHONY SHADID (Foreign Correspondent, THE WASHINGTON POST): I think when you look at Iraq in its entirety, the predominately Shiite south remains relatively quiet, as does the predominately Kurdish north. But the center of the country, where the traditional homeland of the Sunni Muslims in Iraq [is], there is a relatively intense guerrilla campaign under way. I think we have been seeing dozens of attacks every week. When you look at how this campaign has unfolded, it seems that rather than a sudden collapse of Saddam Hussein’s government on April 9, when U.S. troops entered the city, there may have been a strategic withdrawal. I think we are seeing the capacity of that former government to wage a guerrilla campaign — so far, to sustain it for weeks.

ABERNETHY: They planned it?

Mr. SHADID: More and more — the more we look back at how things have unfolded — it seem[s] that may be the case.

ABERNETHY: Why has it been so difficult to find Saddam Hussein?

Mr. SHADID: Well, Baghdad is a large city — it’s four to five million people. There is a significant U.S. military presence — 50,000 U.S. troops. But it’s not a suffocating presence, and there remain plenty of places to hide. And as well, in the Sunni — in the rural, the hinterland that is dominated by Sunni Muslims, there is a tradition of giving refuge to anyone who seeks it.

ABERNETHY: Someday, probably, the guerrilla fighting will be over, Saddam will have been found, and there will be a new government in Iraq. What do the religious leaders say about their role in that? What do they want? What kind of government? 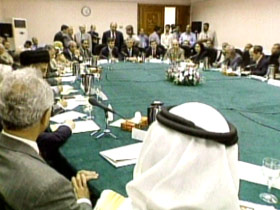 Mr. SHADID: Well, I think there is a great debate on a couple of levels among religious leaders about this intersection of religion and politics. On the one hand, they are debating over what role they should play in that government. Should it be a very active role? Or should it be more of a role as a watchdog? And I think there is also a debate on to what degree religion will define politics — when it comes to women, when it comes to religious minorities, when it comes to what they consider morality. That debate by no means has been settled yet.

ABERNETHY: Many extremist Islamists have made it clear that they think western culture, western secular culture, is a threat to their religion and their tradition. How widespread is that idea in Iraq?

Mr. SHADID: It’s interesting. When you talk to Iraqis, obviously the more pressing concerns are what you hear in conversations now — that’s electricity, the lack of basic services, the economic problems. But when you dig a little bit deeper you do hear many Iraqis, particularly more religious ones, talk about the anxiety they have over western influence — over this question of identity and what it means to be an Iraqi, what it means to be an Arab, what it means to be a Muslim. And I think that anxiety, that unease that you see lurking beneath the surface, is probably going to become more pronounced as this occupation unfolds.

ABERNETHY: We say we want a secular democracy. Is that likely?

Mr. SHADID: It’s interesting. When we watch about how politics have emerged since the fall of Saddam Hussein’s government, we[‘ve] seen religion become much more of an issue, in some ways as a way to identify people; also as a way to express political objectives. So I think it’s very difficult to see religion not playing a significant role in a future democracy. What role that religion plays is going to be the debate.

ABERNETHY: Could there be both a democracy — that is, a freely elected government — and one that was strongly Islamist?

ABERNETHY: Many thanks to Anthony Shadid of THE WASHINGTON POST, just back from Iraq.