BOB ABERNETHY, anchor: Finally, another form of memory of 9/11 -- the sculptures of a Texas artist. They're being made for St. Peter's Catholic Church in New York by a man whose life work is religious art. Judy Valente reports from Dallas. 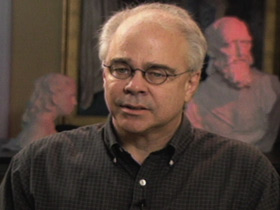 JOHN COLLIER (Artist): I was in my bedroom. Our father-in-law called and said we should turn on the television. It was one of those moments you remember forever. I wasn't thinking about art at all. Weeks later, like probably most other artists in the country, I thought, they're going to make a memorial. I want to be a part of this.

JUDY VALENTE: Months later, Collier would get his chance. St. Peter's Catholic Church is a landmark building only a block from ground zero. Its roof was damaged when struck by the landing gear from one of the hijacked airliners. It was here that rescuers brought the body of fire department chaplain Mychal Judge, who was killed by falling debris.

The church asked artists to submit designs for a memorial, to be erected in its nearby St. Joseph's Chapel. Employees at the World Trade Center had attended mass in the chapel. In the weeks after 9/11, recovery workers used it to store equipment.

Mr. COLLIER: I believe the church chose the theme of resurrection as a metaphor for the reconstruction of the chapel. The resurrection is the hope that Christians have that we will see those we love again.

Mr. COLLIER: St. Michael is the patron saint of policemen.

VALENTE: Collier is still molding the clay figure which will eventually show St. Michael grasping the throat of a serpent.

Mr. COLLIER: An ancient prayer asks St. Michael, by the power of God, to thrust into hell Satan and all the evil spirits. There's St. Joseph, patron of workers. People who built the building, people who will build the building back again, and the workers who died in the building.

VALENTE: The sculpture of St. Florian, seen here in a drawing, is currently being cast into hydrostone, a type of hard plaster. 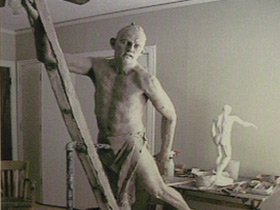 Mr. COLLIER: St. Florian is the patron saint of firefighters. St. Florian is climbing a ladder holding a bucket. I chose a ladder because so many of the firemen died going up the stairways of the World Trade Center. The last figure is Mary Magdalene, who was the first witness to the resurrection. And she's holding the spices that she brought to the tomb -- hurrying to the tomb. But the spice jars are unopened because she didn't have to use them. He wasn't there.

VALENTE: Long known as an illustrator, Collier decided six years ago to devote himself full-time to his first love -- church art. He is one of only a few professional artists who specialize in religious themes.

VALENTE: Collier hopes the families of the 9/11 victims will find that sense of the transcendent in his memorial statues.

Mr. COLLIER: I enjoy the intersection of ordinary things with transcendent things. Every person has the ordinary experiences of their lives that they relate to, and everyone has the intuitive feeling there's something more important behind everything. It's the intersection of those two ideas that gives meaning to our lives.

VALENTE: For RELIGION & ETHICS NEWSWEEKLY, this is Judy Valente in Dallas.

John Collier is a Texas artist who is making sculptures for St. Peter’s Catholic Church in New York. His life work is religious art, but these sculptures are a tribute to the events of September 11th.