BOB ABERNETHY, anchor: The Iraq war and the war in Afghanistan were U.S. responses to the terrorist attacks in New York and Washington on 9/11/01 — two years ago. All that has had a major impact on U.S. opinion. A new report from the Pew Research Center asks if the world is more dangerous than it was ten years ago. Seventy-five percent say yes. This is up from 53 percent who said it was more dangerous just before September of 2001. Also, asked whether occasional terrorism will be part of life in the future, 74 percent now say yes. This week, Kim Lawton went to New York to prepare a special report on the lingering effects of 9/11: the feelings of vulnerability and the grieving that will not — perhaps should not — go away.

KIM LAWTON: There’s not much to see at ground zero these days — a gaping construction site that locals call “the pit.” Still, thousands of tourists visit the site every day. In the surrounding neighborhoods, many New Yorkers say they’re tired of dwelling on the events of 9/11. But religious leaders here say the lingering impact is inescapable.

Rev. DANIEL PAUL MATTHEWS (Trinity Church Wall Street): Superficially, yes, it looks like New York is doing pretty well. And it is — on one level. But not in the depth of our soul. We still grieve deeply.

LAWTON: Religion professor Edward Linenthal has studied the aftermath of the Oklahoma City bombing. He says New York — and the entire nation — should not too quickly dismiss 9/11’s continuing spiritual effects. 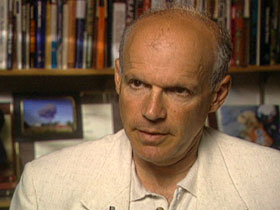 EDWARD LINENTHAL (University of Wisconsin, Oshkosh): September 11 will be unfinished for so many people. And we delude ourselves and try and create, I think, a dishonest and disrespectful narrative when we try and use these quasi-religious, pop psychology terms like “closure” and “healing process.” I think the corrosive effects of these events — I think that the toxic impact of these events are enduring.

LAWTON: Many New Yorkers say the recent blackout brought home all too clearly how raw those issues are.

Rev. MATTHEWS: For me, the blackout was terrifying. More than I would like to acknowledge. Running down those steps, telling everybody to get out of the building. It’s still right on the surface with those of us who live in New York. And spiritually, we’re still working through the fear.

LAWTON: The Reverend Daniel Paul Matthews is rector of the Episcopal Trinity Church Wall Street and its St. Paul’s Chapel. St. Paul’s is literally across the street from ground zero.

On September 11, the 300-year-old church and its cemetery were deluged by World Trade Center debris — but they were unharmed. The front of St. Paul’s became a spontaneous shrine, where people remembered the lost with pictures, prayers, and mementos. Inside, the chapel was a place of refuge, where rescue workers could take a nap, get some food or spiritual sustenance. Reverend Matthews says 9/11 has had a decisive spiritual impact, for good and for ill. 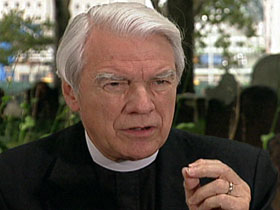 Rev. MATTHEWS: I think people have absolutely lost their faith over this issue — “Where could God have been on September 11? Forget, forget, I’m out of here. My faith has gone.” And there are plenty of people like that. On the other hand, faith was regained and recaptured and rekindled by an experience of self-giving that is what the authentic reality of religion is all about.

LAWTON: Alessandra Pena was one of the church volunteers. She says her faith grew dramatically because of her experience on what she calls the “pile of rubble.”

ALESSANDRA PENA (Church Volunteer): You smelled, you saw, you walked through; it was palpable, the extraordinary and completely senseless destruction that you saw. But in that same place, you also saw extraordinary, senseless acts of faith. People say, you know, “Didn’t you wonder where God was?” And you know, I know exactly where he was. He was in that chapel and he was out there on the pile.

LAWTON: Across the river in Brooklyn Heights, Gail Singer says she still wrestles with the implications of 9/11. But practicing her Jewish faith has sustained her.

GAIL SINGER: I did question God. But I came to services. And I remember talking to the rabbi about it. And I said, “How can we be here? How do you go on?” And you do. And I think coming together as a people really helped us go on. I don’t know that there’s an answer. Life won’t be the same. But we’ll be together. 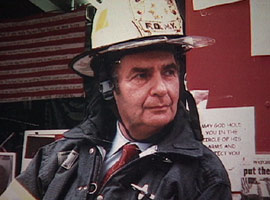 Rabbi JOSEPH POTASNIK (Congregation Mount Sinai): My parents lost seven children during the Holocaust. I’ve grown up in a home where there was brokenness of the heart. And for me, September 11, I suspect, reawakened that broken spirit because I felt I had family that I had lost in that wreckage. But I also saw a family that refused to succumb to passive resignation, that arose from that despair and dedicated their lives to starting again.

LAWTON: This year, the anniversary of 9/11 falls two weeks before the Jewish High Holidays. For Jews in this Brooklyn neighborhood, rituals of Rosh Hashanah, the New Year, have particular poignancy.

LAWTON: New York’s Muslim leaders say the biggest spiritual challenges their community face[s] are dealing with a continuing backlash of prejudice — and the frustration of constantly having to differentiate themselves from terrorists. Many Muslims still feel twice victimized. 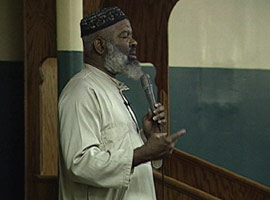 Imam SIRAJ WAHHAJ (Masjid At-Taqwa): When you attack America, then you’re attacking my country. So we have that. The attack of the World Trade Center. I say, I’m an American, America was attacked. Okay, number one. Number two, I’m getting blamed for it. So it’s a double tragedy. Innocent lives lost. Then I as a Muslim, people look at me with suspicion.

LAWTON: Imam Siraj Wahhaj leads the At-Taqwa mosque in Brooklyn. He counsels his members to avoid bitterness by drawing on their religious tradition.

Imam WAHHAJ: Prophet Muhammad, one of the great prophets, was maligned. People hated him. And he had to bear it with patience. So, all the other prophets, Jesus, Abraham, Moses, you know, they had all their afflictions and trials, so they had to bear it, and we have to bear it the same way.

LAWTON: Because 9/11 has irrevocably changed everything. The challenge is figuring out how to fashion a “new normal.”

Mr. LINENTHAL: If we know anything about the impact of violence, it is that there’s no old self to put back together. There is only a new self to be reconstituted out of the resources that a person brings and the impact of the event itself. A person brings that together. I mean — that’s rebirth. 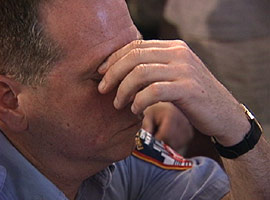 Rabbi POTASNIK: We all walk around with scars or scratches. You can’t often heal a scar. But you can cover it. And what we try to do, at least in the spiritual world, is teach people how to cover some of those scars so they can continue to live, and life still has meaning and purpose.

LAWTON: Yet, as St. Paul’s Chapel has learned, finding the way ahead can be a difficult, delicate balance. On the one-year anniversary of 9/11, St. Paul’s opened a special exhibit honoring the victims, the rescue workers, and the church volunteers. It was supposed to be a temporary exhibit, but it’s still there today. And nearly 700,000 people have come through. Reverend Matthews says the need for collective grieving is still strong.

Rev. MATTHEWS: When you go to the funeral home to visit the person who’s died who’s a friend of your family, you need to put your body there. It’s in the traditional church thing. We call it a sacrament. You need to make an outward and visible sign of something that’s deep and inward and spiritual.

LAWTON: Within the last few months, St. Paul’s finally did remove all the memorial items from the front fence — but only after a great debate within the church and the entire community.

Rev. MATTHEWS: It is a tough, tough journey. And anyone who is flippant enough to say you ought to move on doesn’t know what authentic grief is all about.