BOB ABERNETHY, anchor: Now, the wall -- the not yet finished wall being built by Israel, and the arguments and fears about where it might go next.

Now, after years of terrorism and suicide bombers -- and of Israeli military control of much of the West Bank -- the Israelis want to wall themselves off from the Palestinians. But, in some places, the wall is going not just along the Green Line but well into the West Bank -- for one reason, to include Israeli settlements in the Palestinian territories. 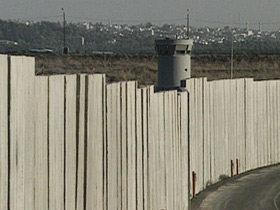 Lucky Severson has this special report from Jerusalem.

LUCKY SEVERSON: As the tension and violence in the Middle East continue to escalate, the Israeli government has devised a plan to stop it. It's a wall -- this wall, 24 feet high. In some stretches, it's a security fence outfitted with sensor devices, TV cameras, and guard towers. The Sharon government has already constructed 90 miles of this barrier, which will eventually stretch 400 miles.

Most Israelis say it's the only option. The Palestinians warn that it could provoke an even more dangerous situation.

Walls in this part of the world are not new, of course. The holy city of Jerusalem, which means "City of Peace," is surrounded by a wall that has withstood endless bloody battles. The prize is enormous. This is the Holy Land.

It is awful enough to see soldiers maimed and killed in battle, but suicide bombers also blow up children, and parents and teenagers with promise and hope. It seems almost everyone in Israel knows someone. Gerald Steinberg is a professor of conflict resolution at Bar Ilan University.

Professor GERALD STEINBERG (Bar Ilan University): That night at 11:20 we were sitting in our room and we heard 500 yards from here, we heard the bomb at the El Al Café. I knew some of the people who were killed. You wait and you hear five minutes later the ambulances, and you can visualize everything that's going on there.

SEVERSON: The fear factor enters into every calculation of every day -- which bus to take. Should I take the kids to school? Should I stay home? 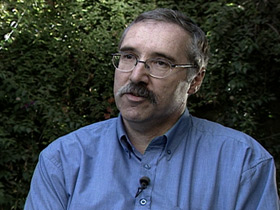 Professor STEINBERG: That is a very, very difficult way to live. Nobody that I know is going to say were going to give up our right to a state and the future of the Jewish people. We're not going to give in to that kind of terrorism.

SEVERSON: On the other side, the Palestinians say they are the victims of Israeli terrorism, of missile strikes that have often killed innocent bystanders. Since the last Intifada, which began in 2000, the Palestinians have suffered three times more casualties than the Israelis.

Palestinians say this makeshift wall in East Jerusalem, which will be replaced by the permanent one, is only one reason they have such fear and loathing of the Israeli occupation. When the army is not around, kids can sneak through the hole in the wall to go to and from school. It's a more difficult squeeze for the adults.

It's a difficult dilemma for Israeli border police as well. This soldier was trying to help an older Palestinian carry his load, until his commander ordered him to stop. 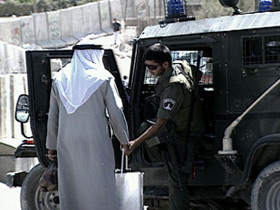 If they don't find a shortcut like this, most Palestinians are forced to spend hours waiting at military checkpoints.

(to Unidentified Woman): Does this make you angry?

Unidentified Woman: Angry, frustrated, tired. I can't get home to study, I can get there just to sleep, that is all I can do. They make my life miserable -- those things.

SEVERSON: Even ambulances in dire emergencies are searched and checked for bombs. Several Palestinians have died, waiting.

Life in the territories is dark and depressing, says the President of al-Quds University, Sari Nusseibeh.

Dr. SARI NUSSEIBEH (President, al-Quds University): Going along to visit Palestinians, you find anger, frustration, poverty -- in a sense, surrender and inner surrender to the inevitability of the darkness both of this hour and of the hours to come.

SEVERSON: So, as both sides dread the hours to come, the Israeli government is pushing on with its wall and fence with one primary purpose -- to keep the Palestinians out -- a wall that has the strong support of most Israelis, including the diminishing number known as liberals.

HIRSCH GOODMAN (Former Journalist and Military Expert): It's like an act of desperation. If this is going to help, okay. Let's try it. I mean, people can't see peace on the horizon.

SEVERSON: Hirsch Goodman is a former journalist, and a military expert. He is angry at his own government that the situation has become so desperate a wall is necessary -- and he is fed up with the Palestinians.

SEVERSON: Much of the wall, or fence, to protect Israel from the Palestinians isn't being built on Israeli land. It'll cut through the Palestinian territories, through olive orchards like this one. That's why this trench has been dug through here, and it will extend through communities, through schools. 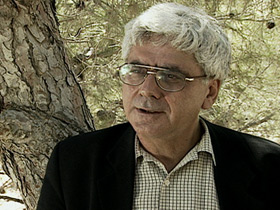 Dr. NUSSEIBEH: It cuts across here to there at the entrance to the campus.

SEVERSON: If the wall continues on course, it will slice through Sari Nusseibeh's al-Quds University, which is the primary Palestinian school of higher learning in Jerusalem, with over 5,000 students.

Dr. NUSSEIBEH: Look, if they were to build a wall along the Green Line separating Israel and the Palestinian territories on the other, you know we would shout in the streets celebrating this because it would indeed be a statement of separating between two states, but that's not what they are doing with the wall.

SEVERSON: What they, the Israelis, are doing is building the wall beyond the universally recognized Green Line, established after the 1967 war and then agreed to by both sides. The exact course of the rest of the wall isn't official, but Israeli defense forces want it to go inside Palestinian territories, known as the West Bank, to protect Jewish settlements -- the same ones that were built and encouraged by the Israeli government.

Some settlements are very small. Some, like Ariel, have grown into small cities.

Mayor RON NACHMAN: It's like the belly button, you know, belly button. It's the center of Israel.

SEVERSON: Only as Mayor Ron Nachman is painfully aware, Ariel is not inside Israel, it's deep inside the Palestinian territories.

Mayor NACHMAN: I insist that there be a fence, not around the city but around the region, so that the pupils that come from the communities you see there will not be attacked along the way.

SEVERSON: The mayor is very proud of his community of 18,000, which looks an awful lot like Orange County, with a lethal exception. 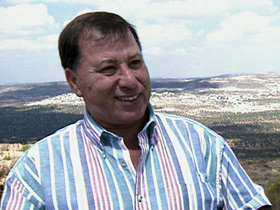 SEVERSON: We couldn't see a wall, but we did spot an imposing security fence that surrounds Ariel. To connect that fence to the new wall would cut a huge chunk right out of the West Bank.

Many Israelis, even those politically conservative, actually want the wall to exclude most settlements and stop new ones, so the thorny issue that has caused so much violence might finally go away.

Professor STEINBERG: Enclosing all those settlements really goes against the spirit. The spirit is to reduce the friction to the maximum possible level. Ariel is a problem and there is no solution for it.

SEVERSON (to Mr. Goodman): What if this wall dissects? What if there are no Palestinian territories and they're left with half as much land?

Mr. GOODMAN: We're not cutting Palestine in half. There's no Palestine there.

SEVERSON: Israel is, in fact, a very secular state. The majority of its citizens are nonobservant. But for a very vocal and influential minority, this is a holy war.

CHIAM SNUEZ (Ultra-Orthodox): We have to fight with them. Did God give this land to the Jews? Yes. It is promised land. This is the promised. This is the only land for Jews. Only for Jews, not for all the world. This is the land of the Jews, only for the Jews. 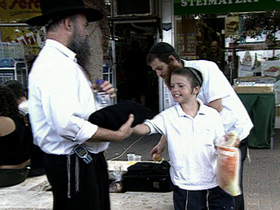 SEVERSON: For Chiam Snuez, and other Israelis and Palestinians caught in this sacred struggle, the end seems to justify the means.

Dr. NUSSEIBEH: Religion doesn't command you to kill people. It doesn't tell you to rob people of their rights, or of their lives. But unfortunately, the people who purport to be religious and to understand religions very often behave, in my opinion, contrary to religious values, something we have witnessed throughout history.

SEVERSON: More than anything, what most Israelis and Palestinians want is peace.

Professor STEINBERG: I want the best, the most realistic, most humane, most ethical solution which will allow my people, the Jewish people, to survive with sovereignty in a world that if you don't have sovereignty, you disappear.

SEVERSON: That is also what the Palestinians are worried about as a consequence of the wall -- disappearing.

Dr. NUSSEIBEH: It is going to end up looking like a set of cages. In other words, with walls surrounding populations living in areas very often cut off one from the other -- very often needing permits to visit one another. There is a lot of anger and frustration, yes. But you should never lose hope. And after all, this is a land of miracles.

SEVERSON: So in the land of miracles, there is need now of a really big one, and not a lot of faith it will happen.

ABERNETHY: Sari Nusseibeh, the President of al-Quds University, also remarked: "It is said good fences make good neighbors. But that is true only if you don't build the fence on your neighbor's land."

After the 1967 war between Israel and the Arab states around it, the internationally approved “Green Line” defined the border between Israel and the Palestinian Arab territories. Now, the Israelis want to wall themselves off from the Palestinians. But in some places, the wall is going not just along the “Green Line” but well into the West Bank for one reason — to include Israeli settlements.