LUCKY SEVERSON, guest anchor: Seeds of Peace. It’s half a world away from the violence of the Middle East, but supporters continue to hope against hope that what happens each summer in southern Maine may one day make a positive difference. Now in its eleventh year, the program called Seeds of Peace brings together the children of people who are often enemies so that they might learn what they have in common. So that they might one day fight for peace rather than against each other. 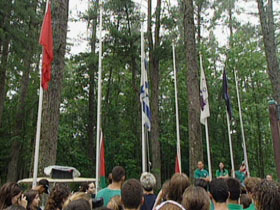 It’s a summer camp, unlike any other, in the lake region of Maine. The most amazing thing is that it’s still here, after 10 years.

Where else could you listen to slightly off-key renditions of the Israeli and Palestinian national anthems at the same gathering?

AARON MILLER (President, Seeds of Peace): Seeds of Peace trains leaders — leaders of the next generation who have a vision and a purpose.

SEVERSON: These are the leaders of the next generation, soon to be instilled with a vision — of peace. Aaron Miller is the new president of Seeds of Peace.

Mr. MILLER: Seeds of Peace provides one thing that any negotiating process needs. It provides hope because without hope there is no life. There is no purpose, and there is no future. 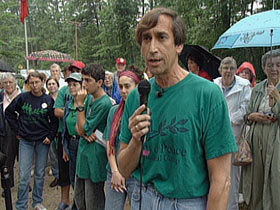 SEVERSON: He left the State Department this year, after 25 years as a Middle East peace negotiator, because he came to realize that without the leadership of the next generation, the struggle for peace will fail.

Mr. MILLER: They are wiser and older than we ever were, beyond their years at their age. Most of these kids have seen things and experienced things that we never experienced.

SEVERSON: The future leaders share bunkhouses with each other, a situation Ayelet Habani, a 15-year-old Israeli, was not thrilled about.

AYELET HABANI (Israeli): One of my friends who was in the army, he told me not to sleep and watch my back, because they could be anything and could come in the middle of the night, and they told me to watch my back and be careful of the Palestinians.

SEVERSON: After a two-year cycle of almost constant bloodshed between Israelis and Palestinians, finally a relative lull as Mideast leaders attempt to follow the American road map to peace. From here, the violence seems a world away, but kids like Aya Hijazi, a Palestinian, know it’s a world they’re going home to. 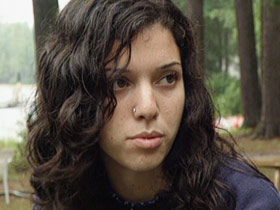 AYA HIJAZI (Palestinian): I have hope and I don’t at the same time — it’s confusing. But I’m trying, because if I don’t it’s going to go on forever — the same problem, the same cycle, us killing them, them coming in with tanks and bombing us. We have to reach a compromise and that’s why I am here.

SEVERSON: For 90 minutes each day, the kids split up into small groups and with the help of a facilitator, and with no cameras allowed, they go at it in what are called coexistence, or coex, sessions.

Mr. MILLER: I guess you could describe them as detox sessions. The built-up poison and venom accumulated even in their short lives builds up and comes out.

AVIHU KRIEGER (Israeli): In my coex group we have a lot of fights — me and Amit are in the same coex groups and it’s everybody sometimes against us and we need to defend Israel, which is not always so comfortable. 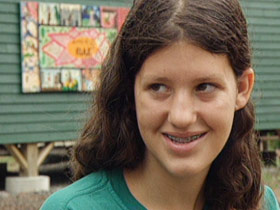 Ms. HIJAZI: No, I call them a freedom fighter because we don’t have soldiers. They took away all our soldiers.

Ms. HABANI: Sometimes we got very angry that they justified suicide bombers, or they say things like, “We are happy that the Holocaust happened because now you understand how we feel.”

Mr. MILLER: These kids begin to really understand the needs and suffering of the other side and also look inside themselves … to see what they in fact have to do in order to bring about change.

SHAHAR AVENT (Israeli): I don’t know if I see things differently now, but I learn a lot. I didn’t know stuff that I know now about the Palestinians, about the children that live there. Now I know a lot, I think. I could still learn because I don’t know everything. 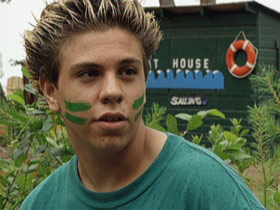 HISHAM AL HASSAN (Palestinian): Sometimes I get angry because I think I am saying everything right and they are just saying no, that is not right.

SEVERSON (to Mr. Al Hassan): But you’ve learned to listen?

Mr. AL HASSAN: We learned this after about four sessions. It’s really noticed now, that we are listening.

SEVERSON: The Seeds of Peace camp was founded by the noted journalist and author John Wallach. Tim Wilson has been camp director from the beginning.

TIM WILSON (Camp Director): This is an experience that they are going to remember the rest of their lives, no matter what they do. What happens afterwards, I can’t control, but this one little time in their life where they could sit here and have contact with the other side and they genuinely, genuinely got a chance to be with someone who is called their enemy. 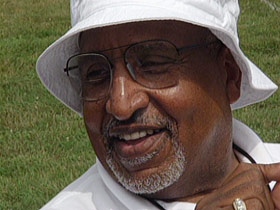 Ms. HABANI: It’s very easy to talk to people who you agree with, your people. But to talk with people who don’t agree with you, and are on the other side of the conflict, we don’t get that in Israel. We can’t — it’s like too risky, too dangerous. We don’t go into those areas.

SEVERSON: These are truly international teams, with kids from all over the Middle East. For some, this is the first time they’ve ever played football. Counselors view sports as an important part of the program, as a way to teach teamwork and eventually trust to kids who once looked at each other as enemies.

Mr. WILSON: You go into coexistence and you spend an hour and a half going at it, you’ve got to have someplace where you even the playing field.

SEVERSON: This was a game against all American boys from a summer camp down the road. When it was over, Israelis and Palestinians and fellow Arabs won, quite easily. 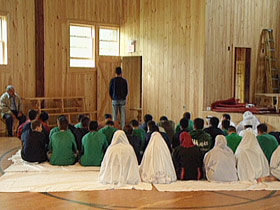 Religion is not a major part of the program here, although Jews, Christians, and Muslims do attend each other’s service.

Ms. HABANI: The religions are very similar and almost identical, so I think if we bring out the religion a little more in the camp, which they don’t really do, we could actually come to a ground for everybody to start with.

Mr. MILLER: We do not actively use religion as a vehicle and as a tool to promote reconciliation and coexistence. The process of creating common ground for these kids on political issues, or let’s just put it this way, on personal issues, is hard enough. To actively pursue a religious dialogue is much too complicated.

SEVERSON: There are skeptics of this program who say the friendships and understanding gained here can’t possibly last when these kids go back home to a climate of violence. But supporters say the seeds planted here will eventually yield a peace. 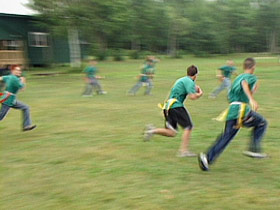 Over the years, 2,500 kids, ages 14 to 17, have graduated from Seeds of Peace three-week summer camps. The kids themselves, like Aya, come here and leave here with a healthy amount of skepticism.

Ms. HIJAZI: Sometimes I think that they brainwash us, somehow. I used to think that long time ago, because they can’t just take us away from reality and put us in another one. I don’t think this is reality — later on we are going to go back home and things are going to be the same again.

SEVERSON: Seeds of Peace leaders were also worried about the reality factor and beefed up their program so that counselors keep in touch with kids even after they graduate.

Mr. MILLER: I think by and large the detractors who make that argument are right, it can’t stick without serious and sustained followup — which is why we track these kids from the age of 14, when our youngest kids come to camp, to the age of 22.

SEVERSON: Seeds of Peace now has a center in Jerusalem to keep track of graduates on the path to peace. It is not easy. Three years from now, all the young Jewish boys and girls attending this camp will serve time in the Israeli military. 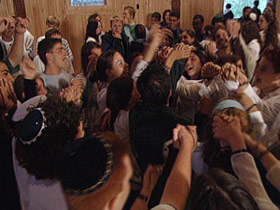 SEVERSON: This is Aya Hijazi’s second visit to Seeds of Peace. Some kids are brought back to mentor the new ones. A few months ago, Aya was injured in a car accident in Israel. Her Palestinian friends couldn’t make it to the hospital, but her Israeli friends were there.

Ms. HIJAZI: They helped me all the way. They were there every day, and that’s something, I think that’s an experience that will always keep me thinking that I shouldn’t lose hope; because they were there for me I have to be there for them.

Ms. HABANI : I really hope that I could be someone who will be involved politically — then I could make my statements more clearer because at my age, they don’t really mean a lot. You can say a lot of things but nobody really hears you. I didn’t even pass 18 yet.

SEVERSON: She doesn’t even pass 16 yet, but what Ayelet and most of the 15-year-olds here have learned could certainly sow some seeds of peace.

After all, if Israeli and Palestinian kids can share challah bread, maybe one day, they can share peace.